9 Symptoms You Should Never Ignore

Pain, fever, shortness of breath — when are these a temporary bother or something much worse? 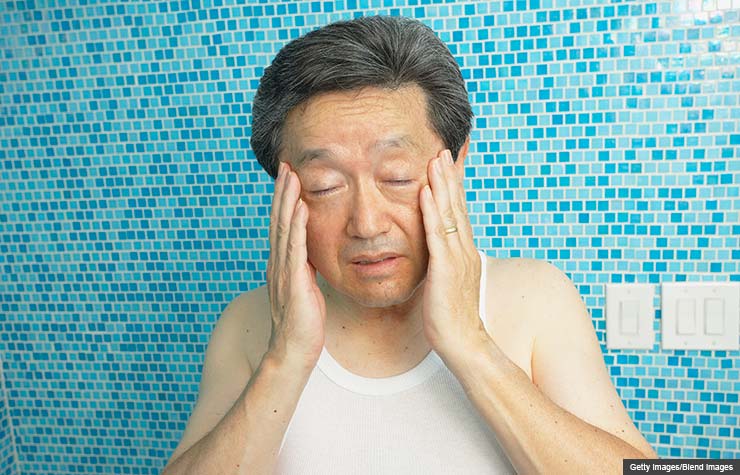 l You wake up one morning with a fever. Or maybe you have a really bad neck ache. How do you know if a symptom is serious or not? "The things that we doctors are most concerned about are new symptoms that develop quickly, rather than things that develop over a long period of time," says Keith L. Black, M.D., chair of neurosurgery at Cedars-Sinai Medical Center in Los Angeles.

Another warning sign? That uh-oh feeling that tells you something's not quite right. "You know your body best," says Len Lichtenfeld, M.D., deputy chief medical officer at the American Cancer Society. "When you see or feel something different or just feel 'off,' pay attention; don't dismiss it."

Here are nine symptoms and what they might mean.

The big worries: If you experience head pain unlike any you've had before, especially if it peaks in seconds to minutes in any part of the head, it could signal a ruptured aneurysm, a blood vessel in your brain that suddenly bursts, requiring immediate attention.

In addition, your doctor will want to rule out three other conditions:

What else it might be: Shingles can cause pain in the forehead before the notorious skin reaction (shingles is a painful flare-up of the herpes zoster virus that lies dormant in anyone who's had chicken pox). Contrary to common belief, sudden severe headaches are unlikely to be a sign of a brain tumor. Rather, research shows that two-thirds of patients diagnosed with a brain tumor experienced tension headaches — dull, achy or pressure-like pain — that steadily worsened over a period of weeks to months.

The big worries: Any intense discomfort, heaviness or pressure — like an elephant sitting on your chest — could spell heart attack. It may be combined with pain radiating down an arm, nausea and vomiting, sweating, and shortness of breath. Women can experience more subtle symptoms, like fatigue, a burning sensation or upper abdominal pain. In any case, call 911. "If it is a heart attack, a delay could cause the heart muscle to be damaged," says Eric Topol, M.D., a cardiologist at the Scripps Clinic in La Jolla, California. If these symptoms occur only during exertion, it could also be angina, which happens when the heart muscle temporarily doesn't get enough blood.

Sudden severe chest or upper-back pain (often described as a ripping sensation) can be caused by a tear in the aorta, known as aortic dissection, which requires immediate attention. Fortunately, this life-threatening condition occurs in only about three out of 100,000 people.

What else it might be: "Perhaps 10 to 20 percent of cases of intense chest pain are due not to heart trouble but to gastroesophageal reflux disease [GERD]," says Topol. Rarely, it could also signal esophageal spasm, an abnormal contraction of the muscles in the esophagus, which carries food from the throat to the stomach. Both conditions can be treated with medications, but it's always wise to go to the ER: "It's a heart attack or angina until proven otherwise," Topol says.

The big worries: Losing more than 5 percent of your body weight — without trying — over a period of six months could mean cancer: Weight loss is a symptom in up to 36 percent of cancers in older people. "If you or a family member is suddenly losing weight after trying 400 times before, you have to ask, 'Why is this time the charm?' " says Lichtenfeld.

What else it might be: Endocrine disorders are a common cause of unintentional weight loss. Of those with an endocrine disorder (especially hyperthyroidism, an overactive thyroid), up to 11 percent experience weight loss. The condition also triggers restlessness, sweating, increased appetite and difficulty concentrating.

If your weight loss is accompanied by extreme thirst or hunger, fatigue and frequent urination, it could be a sign of diabetes.

Gastrointestinal conditions like inflammatory bowel disease and celiac disease cause weight loss as well — in addition to symptoms such as diarrhea and abdominal pain.

Depression and other psychiatric conditions could be to blame, too. "Decreased appetite and weight loss are very common symptoms of depression," says Susan G. Kornstein, M.D., professor of psychiatry and obstetrics/gynecology at Virginia Commonwealth University. "But patients with unexplained weight loss should undergo a workup to rule out general medical causes."

The big worries: Ulcers and colon cancer can cause rectal bleeding or black or tarry stools, says Andres Pardo-Agila, M.D., a family medicine physician at the University of Texas Health Science Center at Houston. If you haven't had a colonoscopy recently, talk to your physician. Vaginal bleeding can be linked to gynecologic cancers. Bloody vomit can result from stomach or esophageal cancer, and people with lung cancer can cough up blood. "Whenever you see blood where it shouldn't be, see a doctor," says Lichtenfeld.

What else it might be: Blood in the stool may be due to hemorrhoids, while blood in the urine may be the result of a bladder or kidney infection. Vaginal bleeding long after menopause may be due to the growth of benign polyps or fibroids. Vomiting blood can result from a tear in the blood vessels or an ulcer in the stomach or esophagus. And coughing up blood can happen with noncancerous conditions, like bronchitis, pneumonia or tuberculosis. "There are many common reasons for seeing blood where you don't expect it, but it still has to be checked out and treated," Lichtenfeld advises.

The big worries: Fever is your body's way of fighting infection. But "fever of 103 degrees and higher warrants a trip to the doctor — period," says David Bronson, M.D., president of the American College of Physicians. It may indicate a urinary tract infection, pneumonia, endocarditis (inflammation of the lining of the heart chambers and valves) or meningitis, which may require antibiotics to clear up. A persistent low-grade fever — for several weeks — with no obvious cause is characteristic of some infections, including a sinus infection, and some cancers, like lymphoma and leukemia. "Cancer is on the list of things we think about, but it is usually not the first thing," says Ronan Factora, M.D., a geriatrician at the Cleveland Clinic in Ohio.

What else it might be: Fever can be triggered by a virus, which, depending on your health and other symptoms, may require hospitalization.

The big worries: Sudden shortness of breath can indicate a pulmonary embolism — when a blood clot forms in the body's deep veins (usually in the legs), travels to the lungs and gets lodged in the lung's blood vessels. Suspect an embolism if you've recently traveled, have undergone surgery or have been immobile, and/or your shortness of breath is accompanied by chest pain and coughing up blood. If you find yourself gasping after climbing two or three stairs or getting tired sooner than you used to, doctors will want to rule out chronic obstructive pulmonary disease (COPD), especially if it's accompanied by a cough and fatigue and you have a history of smoking. Irregular heart rhythm, congestive heart failure and other types of heart disease are additional possibilities. When organs aren't getting enough oxygen, breathlessness can result. See a doctor — stat.

What else it might be: Shortness of breath can occur with asthma, bronchitis or pneumonia. You can also experience shortness of breath, sometimes with heart palpitations, if you are under extreme emotional distress or anxiety. Regardless, patients should go to the doctor. "I don't jump to a psychological issue unless there is nothing else going on," says Factora. "But we don't want to miss those few cases where survival is at stake."

The big worries: If you're experiencing sudden confusion, personality changes, aggression or an inability to concentrate, it's important to see a doctor right away. "The mortality rate for severe confusion is pretty high. You have to figure out what's going on," says Bronson. In the worst case, a brain tumor or bleeding in the brain could be behind the delirium. If you're also experiencing slurred speech, difficulty finding the right words, or numbness or weakness in the face, hand or leg, stroke is a strong possibility. "You have a window of about two to three hours to get to the hospital," says Cedars-Sinai's Black. Beyond that, brain loss may be irreversible.

What else it might be: Medicines and drug-alcohol interactions can also affect your mental state. Plus, confusion can signal an infection, abnormal blood pressure, low blood sugar or dehydration, each of which should be ruled out by a physician.

8. Swelling in the Legs

The big worries: An accumulation of fluid (called edema) in the extremities can be caused by a number of conditions, but the one that most concerns doctors is heart failure, when the heart cannot pump as much blood as the body needs. When that happens, blood backs up in the veins, causing fluid to accumulate in the body's tissues. "Swelling of the legs, especially if it is persistent, should never be ignored," says Gordon F. Tomaselli, M.D., director of the division of cardiology at the Johns Hopkins University School of Medicine in Baltimore. Heart failure is suspected when both legs are affected and the patient also has shortness of breath, fatigue and chest tightness.

What else it might be: A vein problem known as venous insufficiency can also cause swelling. Normally, valves in the leg veins keep blood flowing back to the heart, but in those with venous insufficiency, these valves are weakened, causing a backup of blood. "If valves are the problem, swelling usually goes away when you lie down," Tomaselli says. Compression stockings can help. Swelling can also result from hypothyroidism (not enough thyroid hormone).

The big worries: Sudden abdominal pain could signal that an aortic aneurysm — a bulge that develops in the aorta, frequently in the abdominal area — has ruptured. "If the aneurysm ruptures, the pain tends to be sudden and severe and typically centralized around the belly button," says Richard Desi, M.D., a gastroenterologist with Mercy Medical Center in Baltimore. Alternatively, sudden pain can indicate a perforated viscus (a hole in the stomach, intestine or other hollow organ), often due to an ulcer. Intestinal ischemia, which happens when blood flow to the intestines slows or stops, starving tissues of oxygen, can be a culprit, too. "It's more common in older, sicker patients who have heart failure or atrial fibrillation," says Brian Putka, M.D., a gastroenterologist with the Cleveland Clinic. Each of these conditions is life threatening, requiring emergency surgery.

What else it might be: Abdominal pain is frequently due to gallstones, which are hard, pebblelike deposits that get lodged in a gallbladder duct, resulting in sharp pain as well as nausea and vomiting. Diverticulitis — inflammation or infection in small pouches of the large intestine — can be another cause of sudden, severe pain, along with changes in bowel habits, fever and nausea. Although irritable bowel syndrome can trigger painful spasms in the colon, the pain tends to come and go over time and may also cause constipation, diarrhea or alternating bouts of both. Appendicitis is a less likely candidate for sudden abdominal pain in those over 50, as the condition is less common with age. When it does occur, however, expect gradually worsening pain in the right-lower quadrant of the abdomen. 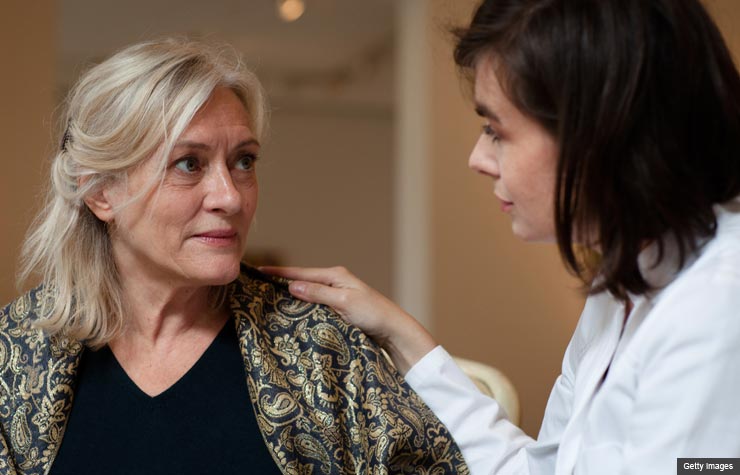 7 Things You Should Know About Depression