As a banking executive and retired colonel in the U.S. Army Reserve, John McKemie, 61, knows how to meet a challenge head-on. It is a quality he has drawn on repeatedly since he was diagnosed with chronic myeloid leukemia in 1987 at The University of Texas MD Anderson Cancer Center.

McKemie first tried interferon, but when it didn't work, he had a bone-marrow transplant. That was a success, and for the next 12 years his luck and health continued.

But in 2000, McKemie relapsed to stage II chronic myeloid leukemia. A lymphocyte infusion failed, and he went into blast crisis, an accelerated stage of leukemia that leads to acute, possibly terminal disease.

Then he tried a clinical trial using the drug Gleevec®. Within a week, his symptoms subsided. To avoid another relapse, he opted for a second stem-cell transplant.

In 2002, McKemie had a basal-cell skin cancer removed. Then in 2003, he was treated for prostate cancer.

The next year, just when McKemie thought cancer was finished with him, three tumors were surgically removed by a double resection of his small intestine. He started taking a trial drug, now FDA-approved Tasigna, for painful tumors that were showing up in his ribs, legs, and throat. When the pain moved to his hip, he began taking another drug, Sprycel®, and his cancer is currently in remission.

Until 2010, McKemie was on employer-provided medical plans that required him to pay 20 to 30 percent of his charges. Repaying medical loans from his first transplant took 10 years. Out-of-pocket maximums and a supplemental plan allowed him to pay off his second transplant in a year. Despite it all, McKemie continues to be upbeat and to work a full schedule. He also finds time to volunteer at MD Anderson. 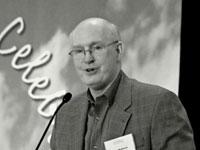 "I'm not going to let this thing defeat me," he asserted. "I won't just sit back and accept it."

Over the years, McKemie has drawn on every tool he could find — staying active, relaxing, visualizing, praying, volunteering — and he encourages others to do the same.

"People have to find their own way," he said. "And they need to be physically ready for the hard fight. They have to be mentally ready, because they have a lot to think about and a lot of work to do.

"They have to be emotionally ready, to prepare themselves, their family and friends, for the roller coaster. And they need to be spiritually ready. You have to mobilize all of these to effectively face cancer, live with it, and hopefully get it behind you."


Printed with permission from The University of Texas MD Anderson Cancer Center ©2010.