En español | People with atrial fibrillation, a heart ailment that causes an irregular heartbeat, face a higher risk of developing dementia than those without the condition, according to a study published Aug. 1 in the Journal of the American Geriatrics Society.

Research already has linked stroke to a higher risk for dementia. Now, this study from the Group Health Research Institute in Seattle reports a link between atrial fibrillation and dementia, including Alzheimer's disease. 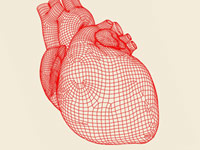 Less oxygen and nutrition get to the heart when you have atrial fibrillation.

From 1994 to 2008, researchers followed 3,045 adults age 65 and older. At the beginning of the study, none had dementia, but 132 had an irregular heartbeat, and another 370 developed the condition as the study progressed.

Every two years, researchers tested the group for dementia. Those who scored below 86 (100 is a perfect score) were given more tests to determine whether they had dementia.

At the end of the study, researchers found that those with atrial fibrillation had a 40 to 50 percent higher risk of developing dementia, including Alzheimer's disease.

"If you have atrial fibrillation, your heart isn't pumping properly, so [the brain] gets less nutrition, less sugar, less oxygen," explains the study's lead researcher, Sascha Dublin, M.D. Atrial fibrillation also can lead to blood clots in the heart; small pieces of the clot break off and travel to the brain, causing tiny strokes that can lead to dementia.

Further research will determine whether people who use blood thinners to manage atrial fibrillation are at higher risk of dementia, Dublin says.

The study results signal a change in the way doctors view Alzheimer's and vascular dementia, caused by reduced blood flow to the brain.

"Our old way of thinking was 'clots, strokes, vascular dementia,' not Alzheimer's," says Eric B. Larson, M.D., executive director of the Group Health Research Institute, adding that the study confirms that vascular dementia and Alzheimer's may be more closely related than scientists previously believed.

Raj Shah, M.D., agrees. "We are starting to find more things associated with people developing dementia that are related to other conditions," says Shah, medical director at the Memory Clinic at Rush Alzheimer's Disease Center at Rush University Medical Center in Chicago. "They may not all be due to stroke."

He says the study's take-home message is clear: "We need to take good care of our heart and health," Shah says, noting that high blood pressure can cause atrial fibrillation.