En español | In this age of astonishing genetic innovations, consumers can surf the Internet for genetic tests that claim to show whether they run the risk of developing heart disease, Alzheimer's and many other illnesses, including cancers. Often the same test promises to deliver innocuous or oddball information such as whether the consumer carries genes for detecting sweaty smells, developing freckles or hating brussels sprouts. 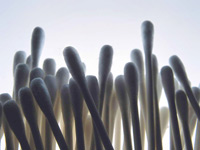 There's no question that certain genetic tests can identify a specific gene that causes a rare disorder or specific mutation that causes some hereditary diseases like breast and ovarian cancers. But an undercover investigation by the U.S. Government Accountability Office (GAO) last year suggested that so-called direct-to-consumer genetic testing companies are misleading consumers in ways that could be "dangerous, irresponsible and deceptive."

As part of the investigation that documented examples of what the GAO described as the "deceptive marketing" of 15 direct-to-consumer genetic tests, five GAO researchers posing as consumers submitted DNA samples — taken from saliva or by swabbing the inside of their cheeks — to four different genetic testing companies. What came back were contradictory results that the report called "misleading and of little or no practical use."

Disease predictions from the genetic testing companies often conflicted with the investigators' actual medical histories. One undercover consumer who has a pacemaker to correct an irregular heartbeat was told he was at decreased risk for developing such a condition. That same consumer, a colon cancer survivor, received test results from one company that he was "at average risk of developing the disease."

Next: Don't seek out genetic test without doctor's support. >>

Risk estimates from one person's DNA also differed greatly depending on which genetic company was providing the results. One of the faux consumers, for example, was told by different companies that he had a below average, average and above average risk for prostate cancer and hypertension.

The American College of Medical Genetics and the Food and Drug Administration have published statements reflecting their concerns about these tests.

Genetic tests for many diseases are based on 'limited scientific information, and may not yet provide valid or useful results.' —CDC

In March an FDA advisory panel said consumers could be easily misled by genetic testing and urged federal regulators to make many genetic tests available to consumers only with the blessing of doctors. The FDA isn't required to follow recommendations of advisory panels, but it often does.

The Federal Trade Commission, which protects consumers against fraudulent claims, agrees, advising consumers not to be pulled in by advertising that suggests these tests can measure the risk of developing a disease, or ads that claim to offer special supplements or foods to ward off developing disease. One direct-to-consumer genetic company representative told a government undercover investigator, for example, that the company's supplements had "cured the arthritis in his knees and prevented him from getting high blood pressure and high cholesterol."

The Centers for Disease Control and Prevention specifically advises consumers not to seek out genetic tests without the support of a doctor, because it says the tests for many diseases are based on "limited scientific information, and may not yet provide valid or useful results."

But those messages haven't necessarily made their way into homes.

Next: Hold off on sending DNA samples and talk to your doctor. >>

When follow-up counseling was provided to the fake consumers, GAO experts were appalled by what they heard. Undercover consumers talked to company representatives in secretly taped interviews. In one phone call an investigator asked, "So if I'm high risk, does that mean I'll definitely get breast cancer?" The company representative told her, "You, you'd be in the high risk of, you know, pretty much getting it."

Record your family's health history using one of these online tools:

My Family Health Portrait from the U.S. surgeon general

Experts who listened to the recording of this exchange called it "disconcerting and horrifying." James P. Evans, editor in chief of the journal Genetics and Medicine and director of Adult Genetic Services at the University of North Carolina at Chapel Hill, was one of those experts: "The kinds of genetic variants tested for by this company give, at most, a very slight nudge in one's risk. Thus, to say you'll 'pretty much get it' is utterly incorrect," says Evans.

More troubling, Evans continued, is how such potentially life-changing information was delivered. "As a physician who has to give bad news to people all the time, I think it's scandalous that if the company person really believed that this woman was 'pretty much going to get breast cancer,' that she would tell her in such an unprofessional and casual way. This is a conversation that requires some empathy, tact and nuance."

Another undercover consumer was trying to learn more about a disturbing prediction that his results "were highly correlated with Alzheimer's disease." Even if a genetic testing site tells someone that they have a high risk for Alzheimer's, Evans said, they shouldn't be too concerned. "I would strongly deter you from cashing in your 410(k), because you may never get Alzheimer's."

These genetic tests can cost anywhere from hundreds of dollars to more than $1,000. Much less costly and far more reliable, say experts, is gathering information about your family's health history. A good place to start is with your own health history and that of immediate relatives.

Although the FDA has not asked genetic companies to stop selling directly to consumers, it's in the process of tightening regulations because of claims made about test results. The science of genetics offers a lot of promise, to be sure. But based on what government agencies are saying, you may do well to hold off on sending your DNA samples for analysis, and talk to your doctor instead.