The results of a large new study show that available screening tests for ovarian cancer are not effective, and that they may even be harmful.

"I can't say we can identify anyone whose life was saved [because of the screening]," says Christine D. Berg, M.D., chief of the Early Detection Research Group at the National Cancer Institute and also a study author. "This particular combination of tests did not work, and there is no recommendation that anyone at average risk be screened for ovarian cancer." 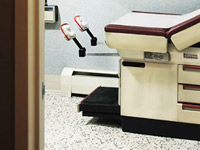 Ovarian cancer screenings have been found ineffective and could lead to surgery.

Known as the silent killer because it is rarely detected in the early stages, ovarian cancer kills 14,000 women each year. An estimated 177,000 currently have the disease and about 21,000 are diagnosed each year, according to the National Cancer Institute. The cancer will strike as many as half of all women considered high risk — those of Eastern European Jewish descent or those who have a family member with the disease. The five-year survival rate is only 27 percent when the cancer is detected in the advanced stages and as high as 92 percent when caught early, so doctors were hopeful this screening might help improve survival rates.

The study evaluated 78,216 women ages 55 to 74 who were not at high risk for ovarian cancer. Half of the group underwent annual screenings with both ultrasound and a blood test for the presence of CA-125, a protein found in high concentrations in ovarian cancer cells.

The other half underwent the usual medical care, which involves an annual Pap test and physical exam in which the physician feels for any enlargement of the ovaries — although this has not been proven effective in early detection.

In the end, 118 women in the group that got the ultrasound and blood tests died of ovarian cancer, compared with 100 in the control group. Some 33 percent of the women falsely diagnosed through the tests had their ovaries surgically removed unnecessarily, compared with none in the control group. The results of the study were published online in the Journal of the American Medical Association and presented Saturday in Chicago at a meeting of the American Society of Clinical Oncology.

Next: What are the recommendations for high-risk women? >>

"It's a terrible and fatal disease, usually striking women age 55 to 65, in the prime of their lives, yet we don't have a screen for it," says James Barter, M.D., a practicing gynecologic oncologist and head of the Gynecologic Oncology Research Division at Holy Cross Hospital in Silver Spring, Md.

The symptoms of ovarian cancer — chronic indigestion, abdominal pressure, pelvic pain and frequent urination — usually mimic those of more common conditions such as gastritis or reflux, Barter says. "We are trying to have providers keep ovarian cancer in mind when patients have these symptoms," he says.

For women at high risk, CA-125 and ultrasound screening are still recommended. But as Edward Partridge, M.D., director of the University of Alabama's Comprehensive Cancer Center and a study author, explains: "There is no evidence that the screenings impact mortality in the high-risk group, either. We're doing it only because we know they're at high risk and this is the only thing we have."

A combination of genetic counseling and CA-125 screening can help women at high risk determine their actual risk, says Noah Kauff, M.D., director of ovarian cancer screening and prevention at the Memorial Sloan-Kettering Cancer Center in New York. And for women who have had two close relatives diagnosed, removal of the ovaries and fallopian tubes even in the absence of cancer is recommended after child bearing, he says.

Hope for the right test

Researchers, however, have not given up entirely on finding a marker for the disease. Serum specimens from the study saved in a tissue bank will become "an incredibly powerful resource" for developing this next generation of tumor markers, Kauff says.

And a study under way in the United Kingdom is looking at changes in CA-125 levels in individual patients over time, rather than checking each patient against a single threshold, as was done in the current study.

Next: What do the preliminary results show? >>

Preliminary results have been positive, says Deborah K. Armstrong, M.D., associate professor of oncology, gynecology and obstetrics at Hopkins Kimmel Cancer Center in Baltimore. And researchers and clinicians are looking hopefully toward the next generation of treatment options.

"Technology is advancing so fast, I think we're going to have a better grasp of who's at risk and better screens in a decade or two," says Partridge of the University of Alabama. "I think that's coming for a lot of cancers."

Jennifer Anderson is a health and science writer.