Take the Smart Driver course and you could save on auto insurance! Find out more.

En español | If you think you can't perform CPR in an emergency because you haven't taken a class or your certification has lapsed, think again.

The guidelines for administering cardiopulmonary resuscitation have changed greatly over the past few years, making CPR both easier to provide and more effective, regardless of whether you've had formal training.

CPR chest compressions can be practiced on a training dummy. — Justin Sullivan/Getty Images 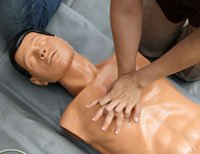 You don't have to take a class or be certified in order to save a life using CPR. The following videos show the basics of what you need to know. (The first one, about hands-only CPR, takes just 60 seconds!)

Today, there are three approved methods for delivering life-saving CPR in situations of cardiac arrest (also called a "sudden cardiac arrest") when, because of reasons varying from exertion to cardiovascular disease to unknown causes, a person's heart suddenly stops beating and he or she stops breathing.

Without oxygen, permanent brain damage can result in as little as four minutes, with death following soon after. However, the immediate delivery of CPR, even by an untrained bystander, can protect and sustain a victim until skilled medical assistance arrives.

In other words, the life you save will likely belong to someone you love.

Aside from revised guidelines for conventional CPR, in which mouth-to-mouth resuscitation is paired with chest compressions, CPR options now include compression-only CPR (also called hands-only CPR) and AED-assisted CPR, which employs an easy-to-use "automated external defibrillator" to safely deliver an electric shock that jump-starts the heart.

The three CPR methods are explained — and demonstrated — via instructional videos on the following pages.

A 2011 study published by the American Heart Association found that just watching a brief video about compression-only CPR, such as the 60-second hands-only CPR video we feature on page 3, provides viewers with enough awareness and confidence to successfully perform CPR in an emergency.

Next: Don't be afraid to perform CPR. >>

Bystanders who provide voluntary care to an ill or injured person are protected from liability. Learn more about the Good Samaritan laws in your state.

"The typical victim of cardiac arrest is a 60-year-old man," explains Sayre. "So if you think about who is likely to be nearby a 60-year-old man — at home, on the golf course, while walking around the neighborhood — it'll probably be his significant other or friends his age."

"If someone is in cardiac arrest, you can only help. It's really hard to make the situation worse."

According to Sayre, the main concern people have about performing CPR is that they're afraid they'll do the CPR wrong and hurt the person.

To such worries, Sayre says, "If someone is in cardiac arrest, you can only help. It's really hard to make the situation worse."

If a rescuer accidently breaks the cardiac arrest victim's ribs while administering chest compressions, it's worth keeping in mind that a broken rib is a better outcome than death. And if by chance the person who collapsed isn't in cardiac arrest, and someone starts CPR, "the victim will likely wake up and tell you to stop," Sayre reassures.

When faced with a cardiac arrest emergency, Sayre advises calling 911 and then doing CPR as best you can.

"CPR buys time," he says, "and performing some CPR is better than doing nothing at all."

Next: Learn compression-only (aka: hands-only) CPR. >>

Compression-only CPR was approved for use by the American Heart Association in 2008.

Studies have shown that this form of CPR (which is commonly referred to as hands-only CPR) is as effective as conventional CPR (which includes mouth-to-mouth resuscitation) when caring for victims who have a sudden cardiac arrest.

While it's smart for you to understand the basics of hands-only CPR, it's even smarter to make sure your friends, family and colleagues are informed You never know. The life they save could be yours! Additional resources about performing CPR can be found at:

Unlike in a drowning situation, from which a victim's lungs are filled with water, a person who collapses suddenly because of cardiac arrest still has breath in his or her lungs. The use of deep chest compressions can circulate oxygenated blood through the victim's body and keep the person alive until an AED (automated external defibrillator) is activated or medical assistance arrives.

Hands-only CPR is featured in the American Heart Association's 2010 CPR guidelines, which are the current standard for all companies and non-profits (such as the American Red Cross) that offer first aid and CPR training.

(To see hands-only CPR in action, watch the 60-second video above.)

Helpful Hint: A victim's upper clothing does not need to be removed in order to receive hands-only or conventional CPR. Compressions should be about two inches in depth, with time allowed for the chest to re-expand between compression pushes.

Conventional CPR, which is what most people think of when they imagine CPR, involves a fine choreography of mouth-to-mouth resuscitation paired with chest compressions. 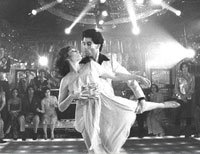 One trick rescuers use to pace their CPR compressions to the recommended 100 per minute is to push to the beat of the disco hit "Stayin' Alive." (Yes, we're talking the Bee Gees song from the 1977 film Saturday Night Fever.)

Forgot the tune? Click the arrow in the audio player (above) and listen to a few beats of "Stayin Alive."

As demonstrated in the video above, conventional CPR involves the following steps:

This type of CPR is the better choice when a victim has stopped breathing because of drowning or when a person is found unconscious (i.e. no one witnesses the collapse) and is not breathing normally.

Mouth-to-mouth CPR is also commonly used for breathing emergencies involving children, since the reason for a young person to stop breathing is usually a respiratory problem and not a sudden cardiac arrest.

Since it can be hard to provide deep enough breaths in order to breathe for two, it's beneficial to learn and practice conventional CPR in a classroom setting. Look for classes in your area by visiting the websites of the American Heart Association or American Red Cross, or by contacting your local department of parks and recreation, adult education or senior services.

Helpful Hint: Specially designed CPR face masks and face shields now exist to assist and protect rescuers while performing mouth-to-mouth resuscitation. Many first aid kits come equipped with such a mask or shield, which can also be purchased at a pharmacy.

Video courtesy of The University of Arizona/Sarver Heart Center

The most common reason for a sudden cardiac arrest is a ventricular fibrillation, which is an extreme disruption of the heart's ability to beat and pump blood. While CPR can temporarily maintain a patient's blood and oxygen flow, use of an AED — short for automated external defibrillator — is often the only way to permanently restore the heartbeat.

Rescue intervention with an AED is, says Sayre, "akin to rebooting your computer when it crashes." However, in order to be effective, an AED must be used within three to five minutes of the cardiac arrest.

If you frequent a particular building, it's worth noting where the AED and other emergency equipment is located. Although AEDs are most common in public settings, the devices are now available for use in the home and can be purchased at pharmacies and other medical equipment retailers without a prescription.

To increase the availability and use of AEDs by the public, the devices are frequently installed alongside the wall-mounted first aid kits and fire extinguishers located in many municipal and commercial buildings, such as airports, shopping malls and stadiums.

A common misperception about AEDs is that they are for use only by professional emergency responders. In fact, the opposite is true. Paramedics arrive at emergency scenes with their own fibrillation equipment. The AEDs installed in public places are very similar to, but are not the same as, the devices found in emergency rooms and ambulances, and used with great fanfare on TV medical dramas.

AEDs, which provide voice instructions and visual prompts to the bystander who is providing aid, come with pads and wires that attach to a victim's bare chest. The device analyzes the person's heart activity to determine when and if an electric shock should be delivered.

Dr. Gordon Ewy, director of the University of Arizona's Sarver Heart Center (he appears in the video, above, and helped create the hands-only CPR guidelines), reminds that AEDs are to be used in conjunction with chest compressions, not instead of them.

In a typical cardiac arrest scenario where an AED is available:

Helpful Hint: Even with the assistance of an AED, performing CPR is hard work for a rescuer. If other bystanders are available to help, take turns performing chest compressions, perhaps switching off after each minute of 100 compressions.