"I was unfamiliar with the term, so I asked my doctor to describe it,” Florez recalls. “When he did, I said, ‘Oh no, I’m not doing that.’” A year later, when Florez returned for some routine tests, his doctor insisted, and though Florez displayed no symptoms, the tests came back positive for cancer. 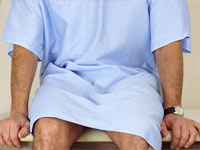 “I wished I’d done [the screening] the year before,” says Florez, a retired postmaster living in Holbrook, Arizona. “It was a ‘macho’ thing.”

“Hispanics are not as diligent as non-Hispanics about undergoing screening and, since there are no symptoms for early-stage colon cancer, we tend to present at an advanced stage, when the prognosis is worse,” says Nogueras, a board-certified colorectal surgeon.

Colorectal (colon and rectal) cancer statistics for Hispanics are alarming. It’s the second most commonly diagnosed cancer, and the second cancer-leading cause of death in men, third among women. Each year about 5,500 Hispanic men and 4,900 women are diagnosed with the disease, and about 1,600 men and 1,500 women die from it, according to the American Cancer Society.

Colon cancer occurs when polyps, or growths, in the colon become cancerous. During a colonoscopy, a doctor can detect and remove polyps, preventing cancer from occurring.

But people are often reluctant to undergo a colonoscopy because they fear it will be painful (it isn’t; it’s done under sedation); and they don’t want to do the preparation, which involves a thorough colon cleansing.

When it comes to Hispanics, there’s even more resistance. Among those 50 and older, the screening rate for Hispanics is 31.9 percent, compared to 49.5 percent for non-Hispanic whites, according to the National Center for Health Statistics. Rates vary among subgroups (see chart below).

One reason for the discrepancy is a strong resistance to rectal exams, says Jose Mendoza-Silveiras, M.D., medical consultant and Medical Scientific Advisory Committee member at the Colon Cancer Alliance: “Women, like men, do not want a doctor to touch them there. They feel it is improper.”

Experts also attribute the low screening rates to a general reluctance by Hispanics — especially women — to examine their bodies, an extreme fear of cancer and a lack of resources to deal with serious medical issues should they arise. 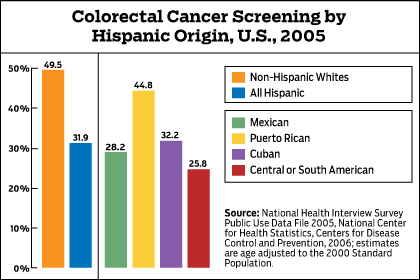 Next: Prevention and six ways to lower your colon cancer risk. >>

Education, experts say, is the best prevention. Key messages include raising awareness of the symptoms, letting Hispanics know that colon cancer is highly treatable and informing them that colonoscopies are done under sedation with no discomfort.

At least two organizations around the country have made colon cancer outreach a key part of their work. One effort is the Hispanic Access Foundation’s national five-year Juntos Podemos Contra el Cáncer! campaign. The foundation has pilot programs in Denver, Colorado, and Yakima, Washington, and in 2012 it plans to launch a multifaceted program that includes a major media campaign, community workshops and affiliations with Spanish-language churches and local health professionals.

The Baltimore-based Susan Cohan Colon Cancer Foundation, less formally called “Susie’s Cause,” also has a Hispanic outreach program. It promotes screening with bilingual materials at its National Health Fair Tour for Underserved Communities and its Save Our Parents Program, what it calls “an interactive hands-on mini medical school” that teaches people of all ages the basics of colon cancer screening so they’ll spread the word to their parents.

And then there’s Juan Florez, who has his own one-person word-of-mouth initiative. After his diagnosis, he had surgery and chemotherapy — which he believes he could have avoided if he’d had the colonoscopy when his doctor first recommended it. Now 65 and healthy, Florez considers himself lucky.

“A friend wouldn’t go to the doctor for anything, and he was diagnosed with late-stage colon cancer, which killed him,” says Florez, who now constantly tells his friends: “Go and get the test, and then you won’t have to have it done again for another five or 10 years. You’ll have gotten it out of the way.”

3) Maintain a diet rich in fruits, vegetables and fiber. Fruits and vegetables provide cancer-preventing micronutrients. Diets high in fiber (25–30 grams a day) have been shown to protect against cancer. Eating a lot of red or processed meats may increase risk.

5) If you smoke, quit. Although smoking is a well-known cause of lung cancer, studies also find that long-term smokers are also more likely to die from colon cancer than non-smokers.

6) Drink moderately. Heavy alcohol use is linked to colon cancer, so men should limit themselves to two drinks a day, and women, one drink.