En español | Thirty years after the first diagnosis of HIV/AIDS gripped the world with fear, the virus can still be deadly, especially for those who don't get tested in time and go untreated, and it's affecting Hispanic women at an alarming rate. But in many cases it is now a manageable chronic disease, says Dr. Jane L. Delgado, president of the National Alliance for Hispanic Health. 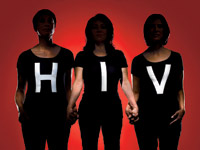 The rate of infection among Latinas is nearly four times higher than it is for non-Hispanic white women, according to the Centers for Disease Control and Prevention, and 20 percent of all women ever diagnosed are Latina. Moreover, 5.5 percent of Latinas infected with the virus are 55 and older.

Beatriz Diaz was diagnosed at age 36, after donating blood. "My son's father knew he had the disease and never said anything to me. The men … " she says. "Sometimes they know they have it and won't say anything about it or even use protection."

Experts say that Latinas are less likely to use condoms than other groups of women, which contributes to their higher rate of infection. "In many cases," says Delgado, "these women are involved with a man who is engaging in risky behavior, such as having sex with other men and not taking precautions."

After her diagnosis, Beatriz Diaz got depressed, in part by keeping her illness a secret. "You can be the strongest person in the world but still need help dealing with this," says Diaz, who joined a support group. Caregivers, too, may need support.

Get help in Spanish and English from the Centers for Disease Control and Prevention and Latino Commission on AIDS; for help in English, visit the AIDS Interfaith Network and National Family Caregivers Association.