It's a frustrating question no one can really answer: Why does the hair on the back of a man's head remain thick and lush, even while the hair on top withers and disappears?

Unfortunately, medical science still has not figured out the exact reason for male pattern baldness or even a cure, but in the meantime, your government wants to help.

Newly approved by the U.S. Food and Drug Administration, it's a computer-assisted robotic arm that makes it easier for surgeons to do a little cranial landscaping. Or, as its California manufacturer puts it, to "harvest hair follicles" from the back of the head and implant them in the barren or thinning areas.

The Artas System, as it's called, is faster and less invasive than traditional hair-harvesting techniques, according to Miguel Canales, M.D., medical director of Restoration Robotics, maker of the new device. It removes tiny patches of skin containing individual follicles, rather than strips of skin that can leave a noticeable scar.

There is one big catch, however: The hair-harvesting robot works only on men with straight black or brown hair. That means poor Prince William of Britain, with his thinning blond hair, is out of luck. So are African Americans and those whose hair has gone completely white or gray.

Canales says his company is "currently doing clinical testing on subjects who have salt-and-pepper hair, and initial results are good."

The new device may be a step forward in better hair transplants, but it's no miracle cure for what ails the male American scalp.

Male pattern baldness affects millions of American men. By age 50, about 85 percent of men in the United States have significantly thinning hair, according to the American Hair Loss Association, a nonprofit consumer group based in California. 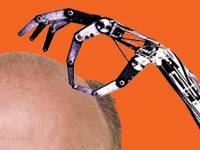 New FDA approved robotic arm makes it easier for surgeons to do a little cranial landscaping.

To combat their receding hairlines, men spend, it's estimated, more than $1 billion annually on everything from hair transplants to toupees to medical treatments like Rogaine.

And despite the sex appeal of bald actors like Bruce Willis and Sean Connery, 50 percent of people who answered a 2010 survey by the International Society of Hair Restoration Surgery said hair loss made them feel either less attractive or self-conscious.

Alan Bauman, M.D., a hair restoration physician in Boca Raton, Fla., who has been performing hair transplants for 15 years, says the Artas robotic arm is not exactly a game-changer. "I already can pluck individual follicles for transplanting, but I do it with a semi-automatic arm — mine," he says.

Even so, he's hoping the new device will allow follicles to be removed more quickly and accurately with less scarring or pain. "Anything that helps surgery be less invasive is important, especially for older patients who heal more slowly," he says. His transplant patients include many in their 40s and 50s — even some in their 80s.

"But we'll have to wait and see," he adds. "The company only has prototypes. Just because it's FDA-approved doesn't mean it's ready to be down the block from you."

Next: Does treatment work for thinning hair in women? >>

He also warns that a natural-looking hair transplant still depends on the skill and experience of the surgeon, not just technology or equipment.

"It's like saying that the quality of a portrait is all in the paint. The artistry of the surgeon is never going to be replaced by a machine," he says.

Spencer Kobren, founder of the American Hair Loss Association, also points out that the robotic arm has only limited potential for women with thinning hair.

"Women's hair thins all over the scalp, including the back and sides, so this [probably] isn't for them," he says.

Bottom line, the hair robot "is not a one-size-fits-all, magic potion," Kobren says. "It's just an advanced tool. Doctors may want people to believe that anyone can benefit from new technology, but it's not always true."