Emergency: Help seniors affected by Hurricane Ian and Hurricane Fiona and your gift will be matched up to a total of $1 million. Find out more.

Nearly two-thirds of Americans age 70 and older have experienced mild to severe hearing loss, and yet only one-fifth use hearing aids. Hearing problems, in fact, often are accepted as an inevitable part of aging, says Frank Lin, M.D., assistant professor in the Division of Otology at Johns Hopkins University School of Medicine. 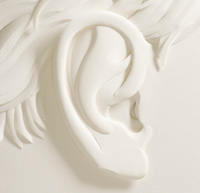 But, like heart disease or high blood pressure, hearing loss, left untreated, can lead to serious problems. Problems commonly associated with hearing loss — loneliness and isolation — are among those older people fear the most, Lin says. And now a new study by Johns Hopkins and the National Institute on Aging finds that men and women with hearing loss are much more likely to develop dementia and Alzheimer's disease.

People with severe hearing loss, the study reports, were five times more likely to develop dementia than those with normal hearing. Even mild hearing loss doubled the dementia risk. That risk, says Lin, a coauthor of the study, appeared to increase once hearing loss began to interfere with the ability to communicate — for example, in a noisy restaurant.

A hearing aid will not completely restore your hearing — and there's no evidence yet that it will prevent dementia — but you can "expect substantial benefits," says Sergei Kochkin, who heads the Better Hearing Institute, an industry-funded nonprofit.

Next: How to get the right hearing aid. >>

Cathie Gandel is a freelance writer based in the New York City area.