Dying on your own terms is not an option for most people with terminal diseases. Meet a doctor who not only made his choice heard but also was instrumental in giving hundreds of people the option of dying the way they want to. 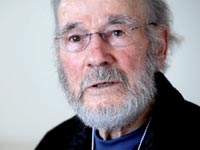 Peter Goodwin believed in, and fought for, death with dignity.

Peter Goodwin, M.D., was a steadfast proponent of “death with dignity.” He believed that dying can be a sensible choice for people who are terminally ill and living with a lot of pain, as long as the right conditions are met. Accordingly, Goodwin fought for Oregon’s Death with Dignity Act, the first law in the country to allow for doctor-assisted deaths.

For the last few years, Goodwin had been battling with corticobasal ganglionic degeneration, a terminal disease of the brain. When his doctor told him he had six months to live, he used the same law that he had helped create to end his own life. Goodwin died peacefully on March 11, surrounded by his children and other family members.

Also of interest: Beginning the conversation about end of life.