It's a familiar story for many older Americans.

In the middle of the night an elderly woman with a failing heart would get short of breath. Her husband of 60-odd years would call 911 in a panic.

After four trips in four months to the University of California-San Francisco Medical Center, the husband met with a team consisting of nurses, a chaplain, a social worker and Steven Z. Pantilat, M.D., a nationally known specialist in palliative care. "The husband told us the hardest part of her illness was coming to the hospital — his wife just wanted to stay home," says Pantilat. "When we told him we could arrange for his wife's treatment at their apartment, the tears just rolled down his cheeks." 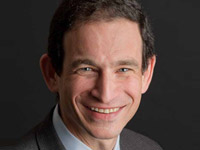 Courtesy of the James Irvine Foundation

For the next 13 months, the woman lived at home while nurses and social workers dropped in to adjust her medications, keep her comfortable and discuss the couple's concerns, Pantilat says. "She only returned to the hospital a week before she died because by then her husband could not manage her care."

Because of his work in the relatively new field of palliative care, Pantilat, 48, has received a $125,000 James Irvine Foundation Leadership Award honoring Californians who contribute to an important social issue. He will use the money for the June launch of a rigorous two-year study of the effect of palliative care on heart disease patients. "Heart disease is the number one killer in America, yet no one has ever looked at whether palliative care can improve patients' quality of life," he says.

"Most people don't know what palliative care is, but once they do, they want it," Pantilat says. "It's a very comprehensive way of looking at the whole person and their quality of life, rather than just looking at a disease and figuring out how to treat it."

Trained in primary care, Pantilat was one of UCSF Medical Center's first hospitalists, a physician who coordinates care of hospitalized patients. He became interested in medical ethics and was drawn to palliative care. "It's very rich in relationships," he says. "If you like talking to patients and working with a team, it's a very rewarding field."

"Steve is a pioneer," says Diane Meier, M.D., of Mount Sinai School of Medicine in New York. "Long before it was common to have palliative care teams in hospitals, he established one at UCSF and used it as a platform to train teams at other hospitals." Between 2000 and 2009, the number of hospitals nationwide offering palliative care programs tripled from under 500 to more than 1,500, she says, adding, "Steve had a lot to do with that."

Moving into the mainstream

Although palliative care is offered to dying patients in hospice, in the last decade palliative services are increasingly offered from the time of diagnosis of a complex illness and in conjunction with curative treatments. So a young adult with acute leukemia, which has a high cure rate but punishing treatment, can benefit from palliative care as well as older adults who live several years with chronic illness or individuals who are dying.

With more research and public awareness, palliative care will move into the mainstream as patients demand it, Pantilat predicts. "So, next time you go to a hospital, tell them you would like to see their palliative care doctor, or even better, a team with a doctor, nurse, chaplain and social worker," he says. "And if the hospital doesn't offer palliative care, find one that does."

Elizabeth Pope is a writer in Portland, Maine.