En español | That cup of French roast might turn out to be more than just a tasty pick-me-up: Two new studies have found that women who drink several cups of coffee a day have a significantly lower risk of endometrial cancer.

In the first report, researchers at the Harvard School of Public Health followed more than 67,000 women enrolled in the long-running Nurses' Health Study, which tracked their health and their coffee consumption, among other behaviors. The researchers published results in the journal Cancer Epidemiology, Biomarkers & Prevention. 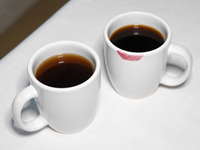 Don't add too much sugar to your coffee or you could reduce the cancer protective benefits.

Women who drank four 8-ounce cups a day had a 25 percent lower risk of endometrial cancer than women who drank one cup or less, the study found. Endometrial cancer — cancer in the lining of the uterus — is the most common gynecological cancer in the United States, according to the American Cancer Society. Some 46,000 new cases are diagnosed each year, and 8,100 women will die from the disease. Most are diagnosed after the age of 50.

Scientists know that coffee reduces insulin and estrogen in the body, says Youjin Je, a nutritionist who led the Harvard study. "Since both high estrogen and high insulin have been associated with higher risk of endometrial cancer, we hypothesized that high coffee consumption may reduce the risk," she says.

The key finding of the second study was that women who drank more than three cups of coffee a day were 35 percent less likely to be diagnosed with endometrial cancer. This study followed 226,000 women enrolled in the NIH-AARP Diet and Health Study for an average of nine years. Researchers published their findings in the International Journal of Cancer.

Both studies found decaffeinated coffee also had a protective effect, though in the Harvard study the effect was weaker with decaf.

Cancer society epidemiologist Mia Gaudet, who took part in the NIH study, finds it "very reassuring" that the two studies had similar findings.

The Harvard study found no protective benefit from drinking tea, which, like coffee, contains caffeine, Je says. This suggests that other compounds in coffee, perhaps antioxidants, might play a role in lowering the cancer risk, she says. Prior research also has linked coffee consumption with a lower risk for type 2 diabetes, Parkinson's disease (in men), liver cirrhosis, liver cancer and aggressive prostate cancer, Je says.

The authors warned that adding substantial amounts of sugar or cream could reduce the protective effect. These "can cause weight gain or insulin resistance that may offset the potential benefits of coffee consumption," Je says.

While stopping short of recommending that women consume more java specifically to prevent cancer, Gaudet says, "these research findings should be reassuring to women who enjoy drinking coffee."