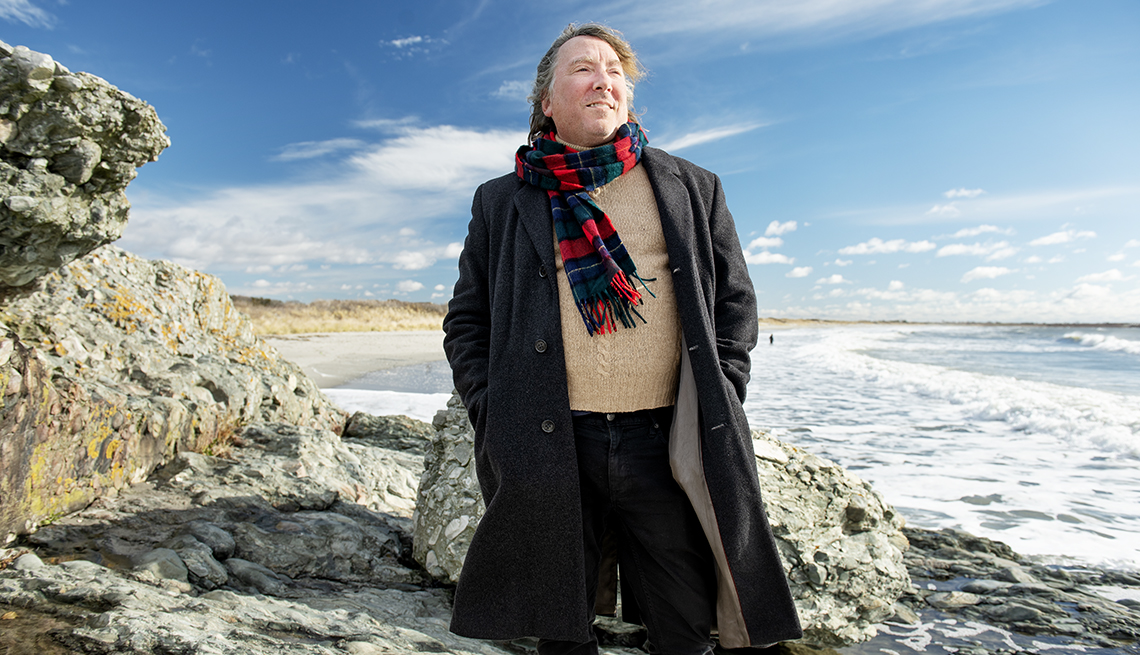 Peter Gerstenzang found that his extreme moods leveled off with the proper medication and he was able to enjoy life more.

En español | With a smattering of stars outside my window, I slip into bed, my dog at my left side, a radio to my right whispering “Moondance.” I review the previous 24 hours. No harrowing bouts of depression so profound it hurts to speak. No episodes of hypomania where I jabber on as fast and shrill as a squirrel on Adderall. No thoughts of suicide. Instead, a full appreciation of my morning coffee, the blue Pacific sky, my afternoon walk to the corner bodega. In other words, a good day. Which seems like a religious miracle considering the countless crippling ones that led me here. Enough of those days and you are so worn down, you think eventually you’ll be erased altogether. Such is the excellent work that bipolar disorder does.

Since I was a teen, I had profound mood swings. I’d have highs where my brain sparkled, full of ideas to write, to film, to play guitar five hours a day. Followed by a darkness so extensive, I couldn’t find the person who performed these tasks. This continued until someone diagnosed these drastic shifts — after I turned 61.

I don’t know why this went on so long, my dance with a conga line of mental health professionals. I talked about my childhood. Discussed my dreams. Reexperienced the pain of childbirth. Did my best to describe my panic attacks. In return I was given Valium, various forms of Benzedrine, crude early antidepressants. None of which touched the illness. Trudging on, I managed to thrive at college, grad school and various magazine jobs. While a little voice within whispered, Fix me.

Somehow I survived until I chanced upon my salvation. Linus Abrams, a private-practice psychiatrist, didn’t stick to the boilerplate process, then hand out platitudes and Prozac. He asked me questions no one ever had before. Did I have sudden, overwhelming desires for activity, for creativity, for sex? Did I call friends at all hours, desperate to share some amazing idea? Did I have long periods when I couldn’t function and have thoughts of killing myself? Yes to all.

The start to relief

So, in something like an hour, 45 years of hell were nosed up into the light. “This doesn’t sound like ordinary depression at all,” said the good doctor. “I think you have bipolar disorder — bipolar II, actually. I’m going to prescribe something new for you. I think it will help.” I flashed back on all the years I’d been pulling my burden behind me, like some black rotting animal. The hours spent paralyzed in bed, my notebook uselessly in reach. The relationships ruined when impatient women thought I was “too moody.” Pictures of these years ran through me as fast as a movie trailer. And I began to cry.

What Dr. Abrams prescribed for me was a drug called lamotrigine. This medication, first created to stop seizures, was found, accidentally, to wrestle hypomania and its vicious counterpart, melancholia, to the ground. What to others is just a white triangle, scored down the middle, to me is God in a vial.

After two weeks my world, which displayed things only in monochrome or blinding colors, began to shimmer gently.

According to the health and wellness website Sharecare.com, bipolar disorder is hard to diagnose because “there is no simple blood test or X-ray that indicates definitively one way or another.” Yet, even with that challenge, approximately 6 million American adults struggle with the condition.

They are no farther away than my closest friends.

Kathy (not her real name — it was changed at her request) didn’t get diagnosed and treated until her mid-40s. “I managed to evade the disease, or cover it up, until my mid-30s,” she said, “which was when I started to really feel it. First I would go into high manic mode. I’d work a ridiculous number of hours every day. I went on wild shopping sprees. The lows were terrible bouts of irritability and deathly depression. I would snap at people for no reason.”

Like me, Kathy saw a succession of professionals who would prescribe various drugs that didn’t work, until finally finding a psychiatrist who asked more probing questions about mood cycles.

A therapist friend told me about another older bipolar sufferer who also had felt devastated by the disease since he was a teenager but then found the right treatment at age 64. He may have made the definitive statement about delayed diagnosis: He felt like he’d been born again. “Why wasn’t anyone able to do this when I was 17?” he wondered to my friend. It appears we both have mixed feelings about the whole affair: glad our disease finally had a name but furious that it was discovered only when we were near Medicare age.

Mark Zimmerman, M.D., professor of psychiatry at Brown University, was able to undo some of the strands of the Gordian knot of bipolar disorder. “Patients tend to come to us when they are in a low mood. So we often think this is clinical depression and we treat our patients for that,” he said. “Often, these same people experience periods of hypomania, when they are energized and can function brilliantly for days without needing sleep. Since people tend to enjoy this state, feel like it’s normal, they often don’t report it. So unless someone comes to their doctor in that manic state — which is unusual — often the patient is not treated correctly for years.” 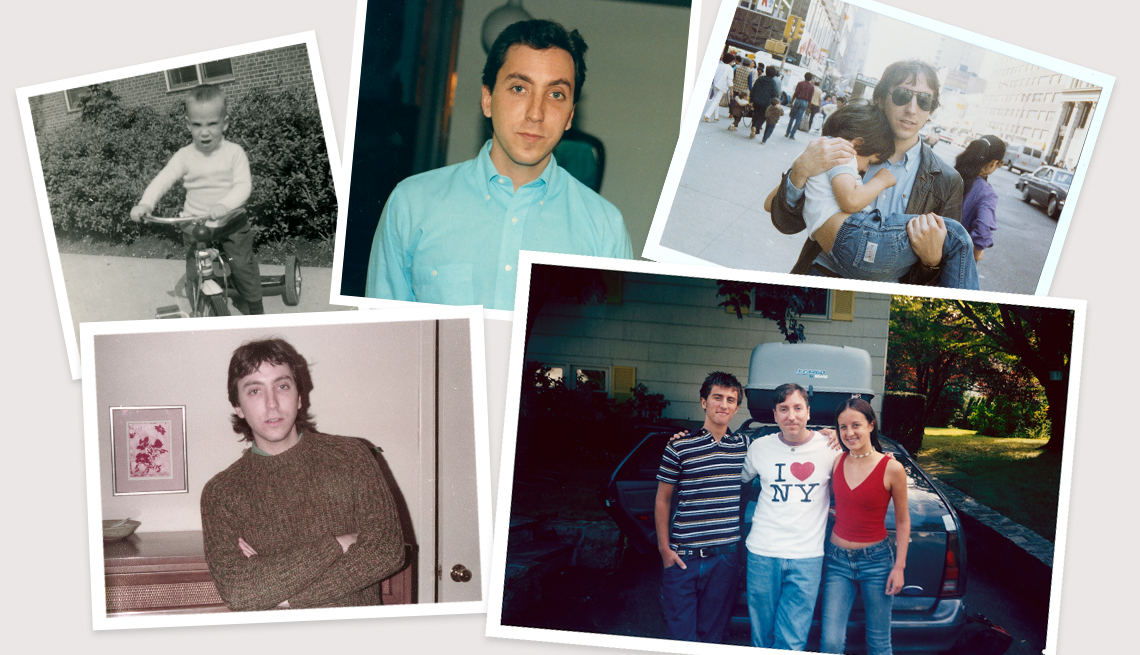 Gerstenzang, pictured during his younger years, alone and with his friends' children, was misdiagnosed by doctors for most of his life.

Thanks to my new medication, my depressive and manic episodes slowly stopped having their way with me. After two weeks my world, which displayed things only in monochrome or blinding colors, began to shimmer gently. In three weeks these shades adjusted themselves until they shone just so. My extreme moods leveled off. As a writer and filmmaker, I was worried that my new medicine would cut off my creative impulses. But the ideas kept coming.

And I started surfing. And driving fast on the freeway while listening to the Smiths. I had nice, nuanced conversations with a variety of people. In other words, at age 61 I started having a great adolescence.

Even as my medication sends signals of joy to my brain, I must still couple it with talk therapy. And I understand that my life will never be a Gene Kelly musical. Despite the right combination of drugs, exercise and soul-searching talks, I’m still me. I continue to have dark thoughts. I wonder why my work can look good on some days and on others seem like second-rate graffiti. The crepehanger I used to be has not been forever banished. And shouldn’t be. He may have been morbid, but he was able to spot and write about many of life’s memorable details. He listened well. He was empathetic. An artist needs that. Is it worth the trade-off? Time will tell.

So this is where you came in. With me covered by a handmade quilt, the dog sleeping and woofing gently like he’s on some wondrous rabbit hunt. Tom Waits is growling on my radio. As I lie here, newly old, I think back on the years I was unable to experience such modest pleasures. And I feel robbed, regretful. But I don’t stay here for long. Tonight, with a newfound ease, I live in the present. I treasure the quilt, the dog, the music. I feel myself falling asleep. And I am smiling.

Peter Gerstenzang, 62, is a video producer, humorist and journalist. His articles have appeared in Rolling Stone, the New York Times, Esquire and the Village Voice.

A brain disorder that causes unusual shifts in mood, energy and activity levels.

People with bipolar disorder often face up to 10 years of coping with symptoms before an accurate diagnosis. It is considered a lifelong illness.

Bipolar disorder results in an average 9.2-year reduction in expected life span; as many as 1 in 5 patients with the condition commit suicide.

Doctors tend to use two approaches:

Psychotherapy: Various forms of “talk therapy” can pair with medications effectively to reduce symptoms. This regular interaction also provides support, education and guidance for patients and their families.

Bipolar disorder affects roughly 6 million American adults, or about 2.8 percent of the U.S. population over age 18. Median age of onset is 25, but one study showed that 10 percent of new cases occur after age 50.

The disease often runs in families, and doctors have identified certain genes linked to the condition.

While it is equally common in women and men, women are more likely than men to go through rapid cycling of episodes.

In this type, the person has manic episodes that last at least seven days and are so intense that they require hospital care.

A less intense version, defined by a pattern of depression episodes and hypomanic episodes (high energy and intensity but not full-blown manic behavior).