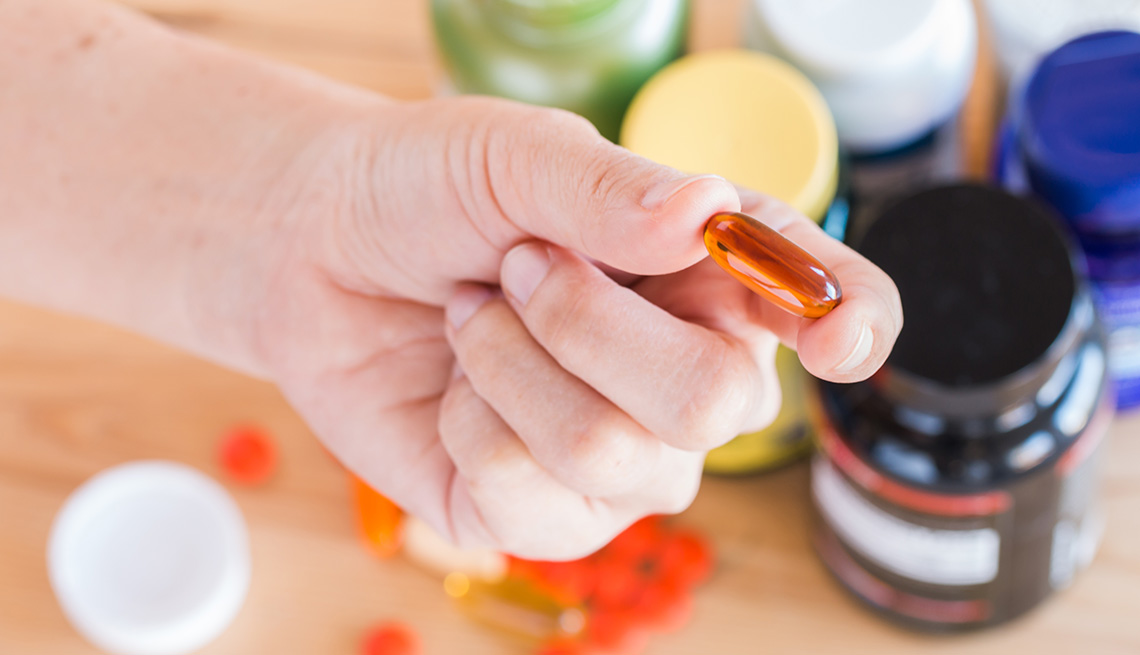 En español | Taking steps to keep your brain healthy as you age is certainly a wise move, and studies show that things like healthy eating, exercise and getting enough sleep can significantly lower your risk of Alzheimer’s disease. As for popping “brain-boosting” supplements, sales of which increased 74 percent between 2006 and 2016, the jury is a little more mixed.

"There are a lot of supplements out there that don't work,” cautions Majid Fotuhi, M.D., medical director of NeuroGrow Brain Fitness Center in McLean, Va. One of these supplements is one you've no doubt heard of — ginkgo biloba. One study published in the medical journal The Lancet Neurology of almost 3,000 adults over age 70 with memory complaints found that this herb didn't reduce rates of developing Alzheimer's compared to those who took a placebo. Similarly, faddish DHEA supplements also recently failed to pass muster in studies.

Learn more about vitamins and supplements.

Here's a look at three supplements you might want to consider specifically for brain health — and another, fish oil, that comes with some caveats.

Certain B vitamins may help slow memory decline when they're taken for at least 18 months, says Tod Cooperman, M.D., president of ConsumerLab.com, one of the country's leading independent evaluators of dietary supplements. One two-year study of people age 70 or over who had mild cognitive impairment, for example, found that those who took a combination of B vitamins (800 mcg of folic acid, 500 mcg of vitamin B-12 and 20 milligrams (mg) of vitamin B-6) had slower cognitive decline than those who took a placebo. These vitamins, especially B-12, are important for brain health because they help insulate and build up brain neurons, says Fotuhi. Yet “about thirty percent of people over the age of 50 don't absorb B-12 properly from food,” notes Cooperman. As a result, they're more likely to be deficient.

If you're over 50, it's a good idea to get your B-12 levels tested, advises Cooperman. If they're low, talk to your doctor about temporarily taking a 100- to 500-mcg daily supplement of B-12, along with possibly 400 mcg of folic acid. It's also important to make sure that you get the recommended daily allowance of B-6, which is 1.7 mg. You can easily get this particular vitamin through your diet, and supplements aren't recommended since high doses have been linked to reduced kidney function and stroke. A list of foods rich in this vitamin can found here.

This compound is found in the spice turmeric and is what gives it its orange-ish color. It also provides a host of anti-inflammatory and antioxidant properties. Some research has also found that it may benefit both your thinking and memory. “We think it's one of the reasons that senior citizens in India, who eat curcumin virtually every day, have a lower prevalence of Alzheimer's disease,” says Gary Small, M.D., director of geriatric psychology at UCLA's Longevity Center. A study done by Small and published this past January in the American Journal of Geriatric Psychiatry on 40 adults between the ages of 50 and 90 with mild memory complaints found that those given 90 mg of curcumin twice a day for 18 months experienced significant improvements in their memory and thinking abilities compared to those who just took a placebo. They also had less buildup of amyloid and tau in their brains, two substances known as biomarkers of Alzheimer's disease.

A teaspoon of turmeric spice contains about 150 mg of curcumin, so you can reap its benefits by adding a dash to your food every day. (If you do opt for a spice, use it in a meal that contains fats or oils, which increases absorption, says Cooperman.) If you take a supplement, be cautious, as many commercial brands don't contain the amounts they claim on their label. The four that have recently passed ConsumerLab's testing requirements are Doctor's Best High Absorption Curcumin, NOW Curcumin, NutriGold Turmeric Curcumin Gold, and Swanson Ultra Turmeric Phytosome.

These compounds, found in chocolate, have also been linked to improved memory and thinking skills. Flavanols are particularly abundant in the cacao bean, which is found in unsweetened cocoa powder. One 2015 Italian study published in the American Journal of Clinical Nutrition found that healthy people aged 61 to 85 who consumed a daily drink that contained anywhere from 520 to 993 mg of flavanols saw significant improvements on memory tests after eight weeks compared to those whose drink contained only about 50 mg. Another 2012 study published in the medical journal Hypertension found that drinking cocoa flavanols each day improved thinking skills in adults who already had mild cognitive impairment.

You need to be careful with cocoa powders since many of them are contaminated with the toxic heavy metal cadmium, warns Cooperman. Consider using an extract like CocoaVia instead. If you have your heart set on a drink made with traditional cocoa powder, limit yourself to a cup a day. ConsumerLab's testing has found that Hershey's (100% Cacao Natural Unsweetened) powder has the highest levels of flavonoids with the least contamination with cadmium or other heavy metals.

If you're healthy, with no memory problems, there's little evidence that you'll benefit from this popular supplement. Research shows positive effects have been seen in people who already are suffering from early-stage dementia. One study published in the British Journal of Nutrition followed people over the age of 65 who had mild cognitive impairment for six months and found that those who took daily fish oil pills improved their scores on verbal fluency, a type of memory-related test where you have to produce as many words as possible from a category in a small amount of time. But a 2012 Cochrane Library review looked at the use of fish oil in more than 3,500 cognitively healthy older people for up to 40 months and saw no benefit. Chances are, if you eat fatty fish such as tuna, mackerel or salmon at least twice a week, you're getting enough fish oil, and a supplement won't make a difference, explains Cooperman.