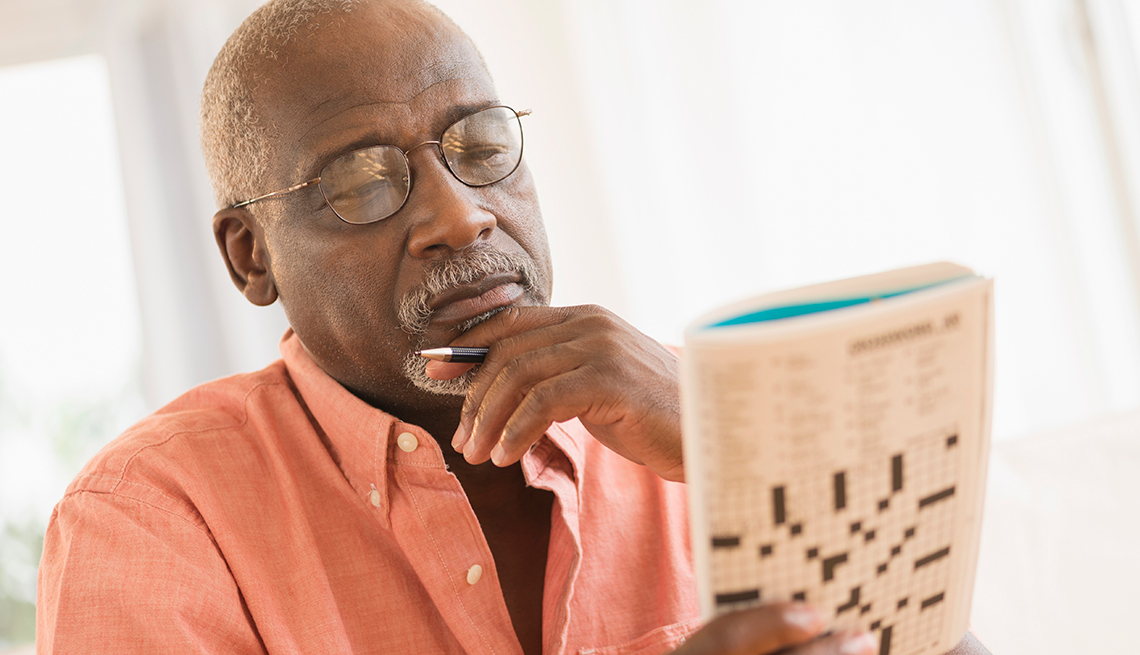 Find out if crossword puzzles and other games can boost your brain power.

If memory lapses have you falling for every anti-aging program you hear about on TV, relax. Keeping your brain young is actually pretty simple—and it doesn't involve popping pills or spending a fortune. Here, some common myths about the aging brain and how to make the most of your gray matter.

Fact: Although the brain naturally shrinks with age, you can plump it up with exercise. Researchers from the University of Illinois and the University of Pittsburgh assigned 120 older couch potatoes to either walk or stretch three times a week, then took MRIs of their brains. They found that walking increased the size of the hippocampus by 2 percent in one year. "That amounts to a reversal of about one to two years of aging," says lead researcher Kirk Erickson. Recent data, he adds, suggest that people who engage in regular physical activity may also have less amyloid, the sticky plaques found in the brains of patients with Alzheimer's disease.

Myth: Supplements can boost your memory

Fact: There's conflicting evidence for popular substances like ginkgo biloba, which is touted for its cognitive benefits, says Gary W. Small, M.D., director of the UCLA Longevity Center and author of 2 Weeks to a Younger Brain. And though vitamin E has shown some benefit in slowing cognitive decline, the high doses required can also increase bleeding and other health risks. A better strategy: eating fish. Research shows that the more you consume—up to three servings a week—the lower your risk of cognitive impairment. A UCLA study of people over age 65 showed that those who ate as little as one meal a week featuring fish had a higher volume of gray matter in the hippocampus, a key memory center in the brain.

Fact: Doing the same thing over and over isn't challenging enough to spark new neural connections and power up your brain. But learning something new is. When researchers at the University of Texas at Dallas assigned older people to different activities, only those who learned a new skill, such as quilting, showed significant brain gains. And brain scans of people in a recent Swedish study showed that parts of the brain grew in size among those who took up a new language. "Your brain is like a muscle," says Daniel G. Amen, M.D., author of Change Your Brain, Change Your Life. "The more you use it, the more you can actually make new connections."

Fact: Medicine doesn't have a cure yet, but research suggests that eating well, reducing stress, staying engaged with others and stimulating your brain with new activities can at least slow this devastating neurodegenerative disease. "If you assume there's an additive effect from different strategies, it's possible to stave off the onset of symptoms by several years," Small says. "That could be quite meaningful for a person at risk." Employing just one such change can make a difference. Eating a Mediterranean-style diet featuring plenty of fruits and vegetables and very little meat or sweets can reduce your risk of Alzheimer's and other forms of dementia by as much as 53 percent, according to a study conducted by Rush University in Chicago.

Fact: In 2014, 70 of the world's leading brain scientists released a statement rejecting the notion that computerized brain training can improve your cognitive powers. Until more is known, you're better off sticking to proven brain boosters — from meditation to hanging out with friends.

Myth: Your mind gets worse with age

Fact: The older brain actually has some big advantages. As brains age, the network of fibers that allow nerve cells to talk to each other gets richer. As a result, older people rely more on both sides of their brains than younger people do. This may account for both the wisdom and emotional balance that accrue with age. Plus, as the brain's right and left hemispheres get more integrated, your creative potential soars. Older adults also benefit from their superior "crystallized" intelligence, which includes the skills, knowledge and experience gained over a lifetime. "In this respect," Small says, "older people do better than teenagers."