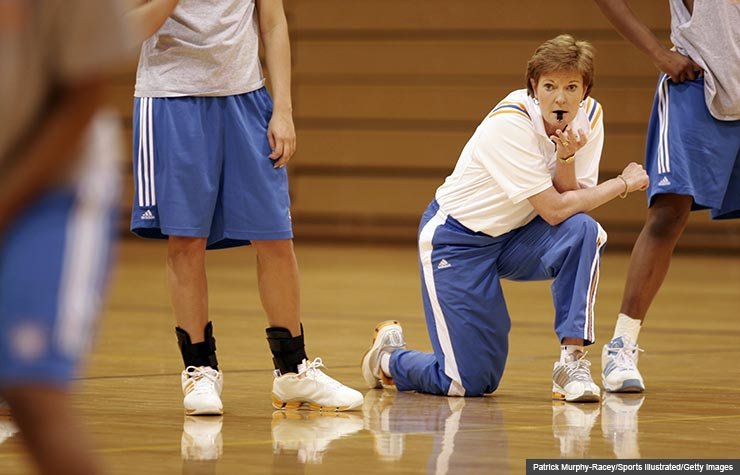 Former Tennessee basketball coach Pat Summitt shares how her experience on the court is helping her fight Alzheimer's disease.

En español l I was taught my foundational life lessons growing up on a dairy farm in Henrietta, Tenn., under the tutelage of my parents, Richard and Hazel Head, and as you may know, cows never take a day off! Growing up in the Head family, your actions always spoke louder than your words. I learned to Make Hard Work Your Passion at a very early age out of respect for my mother and father. Additionally, I learned I was far better off if I not only worked hard but also worked smart (Don't Just Work Hard, Work Smart). These are two of the principles of the Definite Dozen that I crafted a number of years later. The Definite Dozen has been the backbone of the Lady Vols basketball program and remains the blueprint of my philosophy and definition of success.

My love of competition began in our hayloft when I played basketball with my brothers every night after our work on the farm was done. My will to compete continued to fuel me as I went on to play college basketball at the University of Tennessee at Martin, and then later on for the U.S. Women's National Team. Soon after, I learned the joy of coaching. I have always valued the concept of competition — the preparation needed to be ready for the contest and the strategy used to elevate strengths and conquer weaknesses. Another Definite Dozen principle is to Be a Competitor.

My parents and my experiences trained me to seek out new challenges and to endure setbacks, understanding that Change Is a Must. I have learned that you cannot always control what happens in life, but you can control how you handle it. You must Handle Success Like You Handle Failure. You must always embrace learning, bettering yourself and maintaining a positive attitude. You must Make Winning an Attitude.

My life experiences, combined with my faith, sustain me now in my fight against Alzheimer's disease. As with everything in life, I play to win. With the help of my son, Tyler, I continue to take on our newest opponent, early onset dementia. We are playing to win! We have created the Pat Summitt Foundation as a vehicle to do just that — to compete on a national level. We are recruiting a team of advisers, in both business and science, who will powerfully fight on the front lines of science and caregiving initiatives.

Whether competing on the basketball court or against Alzheimer's disease, it takes teamwork to win. Teamwork allows common people to obtain uncommon results (Put the Team Before Yourself).

Are you ready to make a difference? We need your help. Together we will win!

Pat Summitt coached eight NCAA championship basketball teams at the University of Tennessee and is the winner of AARP's 2012 Andrus Award.