The fire that ignited over Labor Day weekend in Bastrop, Texas, 30 miles outside Austin, would ultimately burn through some 1,600 homes and 34,000 acres of this community of about 73,000. The Lost Pines area that burned, popular among retirees for its natural beauty as well as its proximity to both Austin's cultural scene and Houston's world-class medical facilities, was home to Frans and Roselly Hendriks, 66 and 60 respectively, proprietors of Roscar Handcrafted Chocolates.

See also: Tips to help neighbors prepare for an emergency. 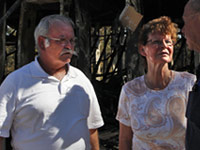 The Hendrikses had spent a decade building their business, which had earned regional acclaim and national clientele for their handcrafted bonbons and truffles. Today, their chalet-style home and tasting room is reduced to a metal roof lying pancake-flat atop a concrete foundation. Their freestanding commercial kitchen now stands like a skeleton out back, steel bones erect but bare, nothing but rubble inside.

Before they evacuated, Roselly had remembered to take one last thing: the notebook that Frans always carried in his breast pocket when he developed recipes. Now, it's all that's left of their business. The Hendrikses count themselves among scores of this fire's victims, people who have lost everything — especially, points out Frans, the retirees, who typically have the most invested in their homes. But the Hendrikses are preparing to make chocolate once again.

A community steps in

Right after the fire, emails started pouring into the Roscar inbox. A local baker and a pair of chocolatiers from Houston offered part-time use of their professional kitchens so that the Hendrikses might keep up with a few of their accounts. The proprietors of Becker Vineyards, a regionally renowned winery in Fredericksburg, some two hours away, offered space in their winery for use, free of charge, until the Hendrikses could get back on their feet. Frans had trouble keeping track of all the offers of help, and though his demeanor is impressively stolid and businesslike, tears well when Frans describes the community's generosity. He is moved, but also uncomfortable to find himself in need. "I never had handouts," he says.

Rebuilding is perhaps the hardest for older residents and retirees, many of whom have paid off their homes and weren't required to carry homeowner's insurance. (The Red Cross has found that some chose not to carry a policy.) But the outpouring of community support to help such citizens has been monumental. Local churches and the American Red Cross have been inundated with donations of clothes and money. Three weeks after the fire started, the Austin Community Foundation, an organization that connects donors with people in need throughout central Texas, had already dispersed $100,000 to help meet Bastrop's needs. Facebook users have created dozens of pages and groups where people can learn about fundraisers, connect with individual fire victims who need help and even share their own stories of the fire. 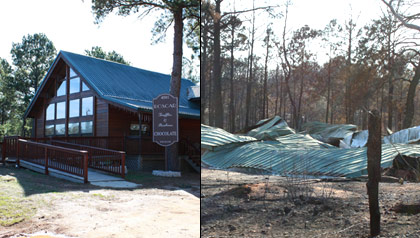 Billy and Tiffany Roberts started one such group well before the fire was contained. They called their Facebook group "Bastrop Fire — Adopt a Family," and intended it to connect people who wanted to help with families who needed it desperately. "We had almost 200 members almost immediately," says Tiffany. "But we had no families!" She called the local news stations to alert them to the project, and one aired a story about it. Suddenly, their membership numbers cleared 1,000. The Robertses, who also live in Bastrop, but whose home was spared, created a website and applied for nonprofit status. So far, they have "adopted out" more than 100 families to people who are committed to helping them through the long rebuilding process.

In spite of huge odds, Frans Hendriks plans to relaunch his business, only "bigger and better. I'm too young to go into retirement," he says. His and Roselly's days are full with discussions with his insurance company about the meaning of "replacement value," paperwork with the Small Business Administration, and meetings with adjusters and city officials.

Frans is now busy making lists: equipment to buy, ingredients to order, truffles to make. Weeks after the fire began, he's still waking up at 3 a.m., when he would normally begin his day, and wants to be ready. As soon as he has the requisite funds in hand, he believes, he can get up and running again in six or seven months. Then, he can give back to his generous community by fulfilling its need for chocolate once again.

You may also like: Volunteers who make a difference and how you can too. >>

Beth Goulart is based in Austin, Texas.