They are the few, the proud, the terrified: Their sons and daughters are at war, sweet-faced children they nurtured through skinned knees and pre-teen angst who now face bullets and booby-trapped explosives.

War is hell, for soldiers and their parents.

Having a child at war defies a core instinct of parenthood — trying to protect your kids. That's impossible to do when they're thousands of miles from home and within sight of the enemy.

Parents of many of the 1.3 million Americans on active duty know the ordeal all too well.

"Psychologically, one of the worst situations someone can experience — perhaps the worst — is the loss of a son or daughter," says Michelle Kelley, a psychology professor at Old Dominion University in Norfolk, Va., and an expert on how military deployment affects families. "Not that having a spouse die isn't incredibly difficult, but having a child die before you is not in the 'natural order.' Even the uncertainty of knowing they are in harm's way is incredibly stressful."

Although the armed forces provide counseling and meetings to help soldiers' families prepare for deployment, it's usually at military bases where spouses and children live. "Parents are back home, typically not living near bases to go to deployment meetings," Kelley says. "They have fewer resources for help."

Even well-meaning friends and neighbors can have trouble relating to the ordeal of having a child in harm's way. They also might not fully comprehend another emotion widely shared by parents of enlistees: the immense pride in having raised a child who, aware of the uncertain fate, still volunteers to serve.

So parents of children in the military learn from each other, bands of mothers who provide support, comfort and answers in online chat boards and face-to-face "meet-ups" through a network of volunteer groups. Many groups are grassroots efforts that a single military parent started and that grew largely by word of mouth.

Military dads are sometimes allowed, but in large part, it's a community for the mothers of service men and women. "Military dads have the same feelings, but it's more socially acceptable for moms to express their emotions," says Kelley.

And in doing that with each other, they find some peace during their time of war.

Read about a mother of an American soldier in Afghanistan who connected with other military parents.

Blue Star Mothers of America: Started in 1942 for mothers of children who serve in any branch of the military. Read

GoArmyParents.com: Support forums for parents to share their thoughts and questions about life in the U.S. Army. Read

Marine Parents: Founded in response to parents' needs to find information and to connect. Read

Military Moms: Support group for mothers of children deployed overseas in all branches of the military. Read

Moms of Military: A prayer and support group for mothers and wives of those serving in any military branch. Read

Navy Dads: Blogs, forums and other resources for parents of those in the U.S. Navy and Marines. Read

Navy for Moms: Highlighted by a robust forums section. Read

Parents Zone: Personal accounts for parents of children serving in any branch. Read

The Band of Mothers: Dedicated to providing support and respect for those in the military. Read 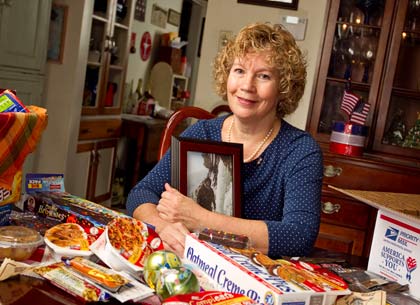 Cathy Cleaver at Home in Audubon, Pa. putting together a care package for her son Evan.

Even as a preschooler, her son, Evan, wanted to be in the U.S. Army. After the terrorist attacks of Sept. 11, 2001, Evan's commitment only grew.

He attended college on an ROTC scholarship. In training, Evan routinely bested seasoned Green Berets in mountaineering and other exercises. And last spring, he graduated near the top of his class in one of the military's most dangerous and important specialties: leading an explosive ordnance disposal unit, the type of experts who dismantled roadside bombs in the film The Hurt Locker.

"I had six year to prepare for this," Cleaver says. "We were at war, and I knew he would go fight that war. But no matter how much you tell yourself you are prepared, when that day comes and your child is sent to fight for his country, it hits you like a ton of bricks. And you realize you aren't as prepared as you thought."

At her job as an operating room nurse at a busy Philadelphia hospital, Cleaver couldn't concentrate and had to take time off. The Xanax prescribed by her doctor helped ease some of her anxiety, she says, "but it didn't change the fact that I think of my son every minute of the day. And that I may never see him again."

Her friends couldn't offer the help she needed. "They are all supportive, they all love Evan, but they just don't get it. They'll say, ‘Why did you let him join? How could you do that?' Because their kids aren't in the military, they don't understand that Evan and others like him want to be there. They feel it's their duty, that it's their calling."

Then Cleaver turned to the Blue Star Mothers of America, the nation's oldest and largest support group for military parents. Named for the symbol that since World War I has signified a household with a child in service, membership is open to mothers and stepmothers whose children are in the U.S. armed forces or have been honorably discharged. Most women in Cathy's chapter have a son or daughter serving in Afghanistan.

"I no longer feel alone," she says. "It's not a pity party. Together, we meet to figure out how to be a mother with a child in Afghanistan."

They have monthly luncheons and prayer services. They hear speakers — often military chaplains and returning veterans — and bond while packing boxes of items and letters to send to troops overseas.

"I honestly feel I send my stresses away in those boxes," Cleaver says.

"It's just being there that helps, surrounded by other mothers who know what you're going through. We're a sisterhood, all in the same boat, who realize that our way of life is possible because of the bravery of these soldiers … the kids we raised. And we couldn't be prouder."

Read about a mother of an American solider who founded a chapter of Blue Star Mothers. 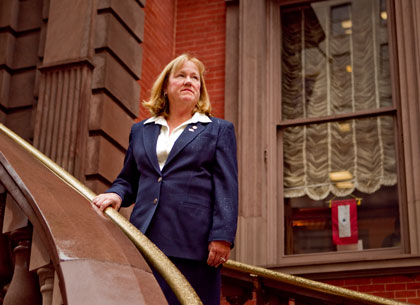 A retired school nurse, Marian Moran now devotes five hours or so a day as a different type of caregiver. She helps parents of children in the military and their kids. "Both are going through a tremendous level of stress," Moran says.

She channels her efforts through the Philadelphia-area chapter of Blue Star Mothers, which Moran founded in 2003. Her son, Kevin, was a helicopter pilot in the U.S. Navy who flew rescue missions from a ship hospital in the South China Sea. She recruited five other local military mothers who she found were suffering the anguish of having children who had to dodge enemy fire.

Now Kevin is in the Navy Reserves and the chapter has more than 150 members. He can be called for duty at any time, but even if he remains stateside, Moran, 61, has no intentions of leaving the group.

"The hardest part of being a military mother is trying to understand how isolated you feel," she says. "But when you find others in the same situation — especially in an area such as Philadelphia, not known for having a lot of people in the military — it's huge."

Much of Moran's work brings to mind volunteer work for schools and churches. She persuades local businesses, universities and churches to donate space for get-togethers. She arranges luncheons and educational seminars.

When together, the members swap useful information, such as which online companies offer low-cost shipping to overseas bases. They also relay requests for items that soldiers need — air mattresses and bed padding; granola bars, tuna fish packets and other ready-to-eat food; dental supplies; socks and foot powder; fluorescent-colored Silly String sprayed to detect IED trip wires; and, recently, snake-bite kits. Beyond that, "Our kids write, I need this or that, but there are other guys over here with no one back home, and they need stuff, too," Moran says. "Then I go knocking on doors and calling local businesses until I get them. I've become a great beggar."

The current campaign is for scarves. "It can get to 20-below in Afghanistan, so we're busy knitting as many as we can," Moran says. And they must be 100-percent wool because if enemy fire hits someone wearing a synthetic scarf, the material will melt and burn skin.

Moran also takes on the most difficult of responsibilities. She travels through four states, at her own expense, to attend funerals for soldiers killed in action. There, she presents the fallen soldier's parents with a Gold Star, the symbol of having a child killed in action.

One funeral in rural Pennsylvania for a Marine killed in Iraq stands out in Moran's memory. "These were poor, hard people. But this young man was so handsome, had so much promise and his parents had pinned all of their hopes on his future. He literally was the pride of the family — of that town — the one who would do so much better with his life. To see his parents at that funeral was so heart-breaking."

Her most recent funeral wasn't much easier: It was for a solider who, tormented by Post-Traumatic Stress Disorder after returning home, committed suicide.

So Moran can still look forward to meeting with her band of mothers during "a happy time where we can just support and learn from each other."

"I'm so appreciative to these mothers," she says. "In order to raise a child willing to put his life on the line, you need to instill certain traits — self-sacrifice, respect, work ethic and patriotism. It takes a special kind of mothering to raise a soldier."