Oh-oh-oh yes, he is the great pretender. And he’s mighty proud of it.

For more than 40 years, Virgil Gibson, the former lead singer of the classic doo-wop group the Platters, has been crooning that top 10 lyric to paying audiences. Now, he shares it for free with troubled teens. And he hopes they will find the pearls of wisdom hidden in his golden oldie. 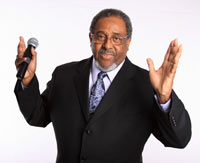 “Kids always pretend to be something that they are not, in order to fit in or look good. Peer pressure tempts them to become great pretenders,” says Gibson, 65. “When we can get them to sit down and be honest with themselves, when they have the courage to be true to themselves, when they no longer have to pretend, they can fulfill their real potential.”

And you thought “The Great Pretender” was just a slow one at the sock hop. Most likely, so will the hundreds who hear Gibson sing Platters’ tunes — along with some gospel — at the Emerging Magazine fundraiser and gala in Beverly Hills, Calif., on Sept. 11.

For the kids
The daylong concert is just the most recent opportunity for Gibson to donate his talents to Shining Star Kids of America, a nonprofit school/camp for youngsters in need that is "so dear to my heart.” Such rustic escapes as bungalow-building, horseback riding and hiking bolster the more fundamental life skills the camp experience aims to impart, as well as schooling and counseling.

Throughout his long career, Gibson has reached out to many troubled young people. And though the children at the camp rightly think Gibson is, to use another Platters’ title, “One in a Million,” the recording industry as a whole has ramped up efforts to leverage its connection to kids for their betterment. The Grammy Foundation, for example, works overtime to arrange events like Justin Bieber’s recent surprise appearance at a Florida high school to support its music program.

The message of the music is, “Be what you want to be, just pick whatever you want to be and go after it. And, I think, the kids need to see something profound: Not just, do it your way; you want to do it the best way.”

If there are any heritage links between doo-wop and rap, Gibson doesn’t want to trace them. “Some part of rap I really detest. Using all kinds of names for women — I think that is the most degrading thing you can do. I deplore people using that kind of language. I have a mamma. Everybody has a mamma.

“But I have heard some very positive rap. It sounds like it is coming around now.”

Unless it does come around, he says, it’s an opportunity lost because music’s potential is incredible: “Music sets the tone of the whole country. The kind of music being played has an effect on everybody: on [a person’s] attitudes towards peace and towards love. The music I do sets you in the mood to be more loving and concerned with the people other than yourself.”

Gospel roots
His work is rooted in the underserved Collegeville section of Birmingham, Ala. His vocal gifts, and a push from his mother, led him from a choir loft to the recording studio to the road. Headlining concerts with the Platters in the 1960s and 1970s, along with such other popular groups as the Drifters and the Coasters, he experienced the joy of fame and the shadow of discrimination.

He also experienced the insanity of a career in music. The Platters shattered into splinter quintets and sextets. Gibson quit counting and joined other groups, such as the Rivingtons. Who? Just read the title “Papa-Oom-Mow-Mow” and see if you don’t start humming. Yep, that’s him.

Eventually, he gave it all up and moved to Europe. But, like so many who have the entertainment bug, he eventually returned to performing live, only with a different goal.

Deeper meaning
“On the stage, basically you are displaying your talents, but you are trying to give something to an audience to help them do better in their lives,” he says.

The Emerging Magazine concert’s Sept. 11 scheduling inevitably raises the question of how Gibson will address the anniversary during the performance. He simply says he won’t — not directly, anyway.

“I live this way every day, whether it is 9/11 or not,” he says. “I understand its great significance. Whatever the catastrophe is, though, there is a miracle in it somewhere. Maybe the miracle on this one is that everybody sees what we have in common.”

Jack Curry, a former editor at USA Today, is a freelance writer and editor and serves on the editorial board of the U.S. Chamber of Commerce, specializing in corporate philanthropy and the media.