If surfing has caught a new philanthropic wave, Shaun Tomson is riding right on top of it.

The surfer stereotype — a self-indulgent, unemployed dude living in a Volkswagen bus emblazoned with peace signs — is outdated, Tomson insists.

"The surfer's code is all about giving back," he says. 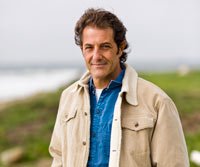 Tomson should know. At age 55, he has transitioned from world-renowned, prize-winning board rider to board director at the Surfrider Foundation, his sport's most respected nonprofit group.

While feeding Luke, his 1-year-old, at home in Santa Barbara, Calif., Tomson says prime examples of today's "evolved" surfers will be front and center at the Surfrider Foundation Celebrity Expression Session in Malibu on Sept. 11. There, they'll be volunteering their day of showmanship.

The charity event coincides with the 9/11 National Day of Service and Remembrance. In its observance, thousands of Americans are devoting their time and energy to projects that will pay back to society and pay respect to the terrorist attacks' victims, survivors, families, rescue workers and volunteers. At the Malibu event, Hollywood celebrities such as host Christina Applegate will join the surfers — on the beach — in raising awareness and money for the foundation's pro-environment mission.

Recruiting top-rung talent for a fundraiser aiming to protect the sea posed no challenge, says Tomson, who won the World Pro Title (the sport's highest) in 1977, 19 other major titles and the Environmentalist of the Year award from the Surf Industry Manufacturers Association. In the water, "surfers are the canaries in the coal mine. If something is going wrong with the ocean, we are really the first to get impacted — from the effect it is going to have on our health to on the environment," he says.

No matter how phenomenally the surfers perform on Sept. 11 in the name of ocean purity, the specter of the recent spoilage in the Gulf of Mexico will hang over the beach. The destruction infuriates Tomson.

"It's greed," he says. "And there will be more until we realize that life is not about getting ahead at the expense of others. That is why the whole notion of connectivity and compassion, all of us being joined together by one ocean, is so important to my life. And I am just hoping that, in some ways by people giving back, they can realize this."

The volunteer surfers are certainly there to do good. But they are sportsmen, not saints. So are the many pro football, baseball, basketball, hockey and NASCAR personalities who, all year long, spend much of their off-the-clock time "paying it forward."

Next: Prominent athletes can raise millions of dollars. >>

A prominent athlete such as cyclist Lance Armstrong can raise millions of dollars for charitable purposes, according to the Sports Philanthropy Project. Foundations established by Major League Baseball and the National Football League leverage their stars for enormous good. Americans' obsession with fitness has turned participatory events such as fun runs and swimathons into reliable cash cows for the nonprofit world.

Against that backdrop of crusading jocks and big-buck foundations, the Surfrider session does seem a bit laid back. Organizer Tomson predicts the day will be "very calming. The way the beach faces the coast, it is protected from the northwesterly winds. It is very sheltered. The waves break perfectly."

For those who can't be there, Tomson recommends visiting any beach: "The ocean speaks powerfully, if you listen. I believe in the whole notion of the ocean as a place of spirituality. Take a walk with someone you love along the beach, or the beach in your mind. That can change your life."

Or it can keep you steady when your life changes suddenly and horribly. That is precisely what happened to Tomson and his wife, Carla, several years ago. "We lost our beautiful 15-year-old son in an accident," he says. His steady voice can come only from a man who has found a way to make sense of calamity.

"You have to realize that we are all connected, and through those connections your life can be better. Putting yourself in another person's shoes, and giving back to another person, makes it better.

"And these are the only ways that one can get through these terrible trying moments of loss that we all experience, whether they are sickness or cancer or death." Or the terrorist attacks nine years ago.

"It is the greatest feeling on this day of remembrance to give something back," he says. "And that feeling can help us beat the terror."

Tomson may sound like the wise man of the sea, but do not call him the old man of the sea. "I am 55, and I am young and strong. That is how surfers are living their lives these days. You know, the great thing about surfing is that it keeps you young, both physically and mentally. Yesterday I was surfing for six hours."


Jack Curry, a former editor at USA Today, is a freelance writer and editor and serves on the editorial board of the U.S. Chamber of Commerce, specializing in corporate philanthropy and the media.