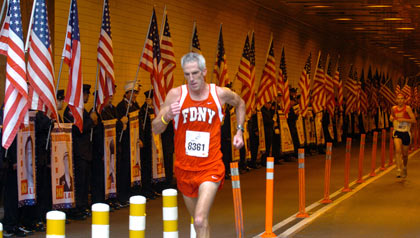 Runners make their way through the Battery Tunnel at the fifth annual firefighter Stephen Siller Tunnel to Towers Run.

En español | The 10th anniversary of the 9/11 terrorist attacks will undoubtedly find more volunteers serving their communities than any previous observance. And there will be more volunteer opportunities for them to choose from as well.

How to make your choice? Begin with a quiet moment of reflection. Review your values and pinpoint your priorities. Chances are an opportunity waits nearby that feels important to you.

For more advice on picking the best option for you, we consulted people who have created much good from a day of grief. Here are their suggestions.

Inspiration. Winuk's brother, Glenn, was a volunteer firefighter who died on duty at the World Trade Center Towers. For Paine, inspiration came from the decision by the New York Mets baseball players shortly after Sept. 11, 2001, to donate a day of pay to a New York rescue workers fund.

Action. Winuk, 53, and Paine, 54, started MyGoodDeed to encourage all Americans to commemorate each September 11 with acts of service. After lobbying Congress for years for an annual national observance, they stood with Barack Obama as he signed a bill designating Sept. 11 as the National Day of Service and Remembrance.

Tips. Put your experience to use. "The expertise of people who have lived a few years is an extraordinary national resource that goes untapped," Paine says.

Consider your talents when picking a cause. Health care workers, help a clinic in a poor neighborhood. Accountants, track donations for a charity. Teachers, explain the lessons learned from 9/11 day in class. Doctors, lawyers, business executives, parents — you get the idea.

Service needn't be as heroic as Winuk's brother's. "There was a couple in Boston who spent an early 9/11 anniversary walking the streets, putting quarters in expired parking meters," Winuk says. "Every act of kindness counts."

Next: Make a new personal connection. >>

2. Reach Out and Touch Someone.

Inspiration. Searching for a way to honor the Aldermans' son, Peter, who died in the Twin Towers on 9/11, Elizabeth saw a television show about the millions of people around the world who survive war and terrorism but endure lasting psychological trauma.

"If people don't care whether they live or die, they won't take their AIDS cocktails, or put their mosquito nets down at night." — Stephen Alderman

Action. The Aldermans established a foundation that trains caregivers in violence-torn countries to treat depression and pain by blending Western medical therapies with local healing traditions. It's a need that is often overlooked, Stephen, 70, says: "If people don't care whether they live or die, they won't take their AIDS cocktails, or put their mosquito nets down at night."

The foundation has served more than 100,000 people on four continents — and eased the Aldermans' own grief. "The foundation helped save our lives. It was a reason to get out of bed, to function at a very high level," says Elizabeth, 69.

Tips. Connect with someone in need; it's a profound gift all can give. Welcome home returning troops through your local USO. Visit nursing-home residents. Hold babies in a hospital nursery.

3. Host a Volunteer Gathering in Your Home.

Inspiration. The national outpouring of support for the victims of 9/11 stirred the nation but left many local service organizations short of funds and volunteers.

Action. AARP has organized a National Day of Service supported by members and employees across the country every year since 2001. This 10th anniversary year, Create the Good, AARP's resource for finding ways to get involved and a 9/11 Day program leader, asked members to host service-themed house parties on 9/11 weekend.

Why house parties? "Because the social atmosphere lets people do something good while having fun," Castaldi says.

Some 1,350 official gatherings — each with at least 10 guests — will spend a day collecting gently used jackets through One Warm Coat; paperback books through Operation Paperback; or a charitable project of their choice.

Tips. It's too late to coordinate an official Create the Good house party, but you can still consider organizing your own, maybe around collecting books for troops or collecting warm coats. Whatever you do, do something: "It can be anything," Castaldi says.

Next: Exercise for charity. >>

Inspiration. Driving to Ground Zero, firefighter Stephen Siller found his route to the Twin Towers blocked because the Brooklyn Battery Tunnel had been closed. He left his truck, strapped 60 pounds of gear to his back and ran through the tunnel and the final blocks to the inferno. Siller lost his life later that day.

Action. In 2002 Regina Siller Vogt and Stephen Siller's other siblings organized the first Tunnel to Towers 5-kilometer benefit race in the footsteps of the 9/11 hero. "We have so many good souls who have their resting place at Ground Zero and you can feel the energy and spirit of each and every one of them," says Vogt, 61.

Tips. What started in Manhattan has spread all over the nation. This 9/11 Day, the foundation will host benefit runs in 343 cities (with the Manhattan run on Sept. 25th).

By racing in or volunteering for these events, you'll help the foundation fund its many causes: burn centers for firefighters, support for wounded veterans, aid for orphans and military children who have lost a parent.

Inspiration. In 2003, Jeff Parness' 5-year-old son asked if he could give his toys to a girl who, the boy had learned from a news report, lost her home in the worst wildfire in California history.

Action. Four days later, Parness, now 45, drove a rental truck packed with relief supplies from New York to San Diego. A banner on the side of the truck read, "New York Says Thanks You," Parness' way of saying that New Yorkers hadn't forgotten the outpouring of support they received from across America following 9/11.

Before long, Parness quit his job in corporate finance to organize an annual 9/11 effort that sends volunteers from New York to rebuild other communities ravaged by disaster. Now the program has evolved into what Parness calls a chain that keeps giving.

For example, his group took New York firefighters to New Orleans after Hurricane Katrina in 2005. Then Katrina survivors helped communities hit by tornado, and so on.

Tips. Do something you love, then urge your friends to do it, too. "One of my volunteers said that this chain is never going to end," he says. "From one day of terror, we are growing a generation of kindness."

You can start your own chain through Parness' efforts. He's recruiting volunteers to organize screenings in schools of an upcoming film about the foundation. For his Stars of Hope offshoot program, he asks people to make stars painted with messages from children, a way to help brighten communities that have been hit by disaster.