Speech professor Bill Todd reaches into his desk drawer at his Miami Dade College office and pulls out a yellowed letter, typewritten and dated April 15, 1972.

The dispatch was sent by B.M. Kobba, M.D., from the small West African village of Mobai in Sierra Leone. 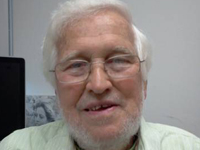 "I want to express my heartfelt pleasure," Kobba wrote, "on the occasion of the opening of my hospital."

Todd, 74, had a lot to do with the building of that hospital. In 1966, he was in the village on a Peace Corps mission when he met Kobba and helped him build Eastern Clinic Mobai.

In December, Todd will return to Sierra Leone, a country he hasn't visited in 37 years.

The reason: Todd plans to help rebuild the clinic, which was badly damaged during the civil war that ravaged Sierra Leone from 1991 to 2002. The war left more than 50,000 people dead and much of the country's infrastructure destroyed.

For years, Todd had tried to reach Kobba, whom he feared was dead. In June, he finally made contact and discovered that Kobba, 70, had fled the country during the uprising but had since returned.

The need to rebuild the hospital is great because the closest clinic is 50 miles away, says Kobba's nephew, Raymond Strasser-King. Kobba still sees patients, but since the war, he no longer has enough medication or the proper facility to treat them.

"People are dying of common, curable diseases such as appendicitis and malaria," says Strasser-King, who was born in Mobai but now lives in Sacramento, Calif. "My uncle is looking forward to Professor Todd's visit. He's excited, and the whole town is excited that help may be on the way."

Todd is delighted to assist his friend with fundraising and organizing the rebuilding effort.

"I've never known him to think of himself," Todd says. "The typical person wants comfort. But Dr. Kobba just wants to help others."

The same could be said about Todd, who estimates he works more than 70 hours a week as a teacher, encouraging students such as Anthony Spallone.

"His stories make you want to do something with your life," Spallone says. "He's inspirational."

Next: Creating a hospital in the jungle. >>

Todd, though, says the real hero is Kobba. In 1966, the doctor had just returned to his hometown of Mobai after resigning his post as a government medical officer in order to open a small clinic in his home. His practice grew quickly.

"He was treating about 100 patients a day out of a mud hut," Todd says. "At night, he performed three or four surgeries. He had no electricity because there wasn't any in the village. He used a kerosene lantern.

"When I saw him operate, it was amazing. His surgeries weren't crude, but the conditions were." 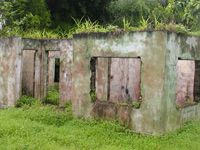 Remains of a building at the former Sierra Leone clinic.

Todd says he asked the doctor what he wanted more than anything.

Without hesitating, Kobba replied: "I want a hospital, right here, in the middle of the jungle."

Todd immediately pledged his support. He got villagers to clear several acres of land, and he enlisted a pair of organizations — Operation Crossroads Africa and the Rural Training Institute — to send volunteers to help with the construction.

The latter group also sent the needed material, a mixture of dirt and cement, which was an improvement over the typical sticks-and-mud construction used in Mobai at the time.

"Those other buildings would fall because termites would eat the sticks," Todd says. "Our structure was more permanent."

Todd's Peace Corps rotation ended before the hospital was built, but he returned in 1974.

"It was beautiful," he says of the edifice, which had 200 beds. "Doctors from elsewhere would visit for weeks at a time."

Todd, who says he felt more at home in Sierra Leone than in any other place he's ever lived, then moved on to new projects, including helping to start a school in Nigeria and colleges in Japan and Belize.

"I believe education opens doors," says the former Marine, who was named an honorary tribal chief in Sierra Leone and Nigeria. "If you dare to be a little adventurous, you can go far."

"They probably think I'm crazy," says Todd, whose wife, Sophia, died of lung cancer two years ago. "They said, 'You know how old you are, right?'

"But the truth is I'm happy when I'm busy. If I have a couple days off, and I'm home, I'm not a happy camper."

Todd enjoys fishing and forces himself to take the bus to work so he can walk about three miles a day to the station and back.

"A lot of people who retire watch TV and do common things around the house," he says. "To me, that's not a life."

Todd says he has a lot left to accomplish, including helping a friend build a library in India.

"I have a lot of energy for an old guy," he says. "I plan to teach and be active until I drop."

Walter Villa is a writer in Miami.