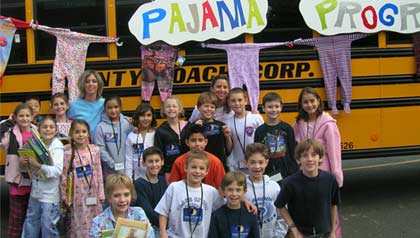 Students in Westchester County, N.Y., donate pajamas and books to needy kids in shelters and homes.

Every fall when the weather turns chilly, David Kucera, a businessman in Somers, N.Y., gets busy on his favorite project. He hosts the Stuff a Bus campaign for the local chapter of the Pajama Program, a charity that collects hundreds of thousands of pairs of new pj's and books for children who live in homeless shelters, foster care and group homes.

See also: Caring for pets of the homeless.

"Some of those kids don't even know what pajamas are," says Kucera, 52. "They're used to sleeping in their underwear, often in strange beds, lonely and scared."

Kucera knows how that feels. When he was 6, he and his brother were sent to an orphanage in Yonkers, N.Y., after their parents split up and neither of them could care for them. They lived there for seven years.

"I was a homeless kid myself," Kucera says. "I know how it feels not to have a mom or a dad around to tuck you in and tell you a story at night."

Eventually, the boys were reunited with their father who had started a small bus company as well as a new family. Dave moved in with his dad, finished school, went to work at the company, learned the business, and took over when his father retired.

Kucera immediately jumped on board to help with the Pajama Program as soon as he heard about it six years ago. "My wife and I started giving money, as much as we could, because this was a cause dear to our hearts," he says. "I could really relate to those kids."

Four years ago his role grew bigger when he decided to donate the use of one of the company's school buses and a driver during the program's major annual drive. The bus, with its exterior cheerfully decorated with pajamas, loops around Westchester County, stopping at schools, churches, small businesses, stores and corporations to pick up contributions — pairs upon pairs of new pajamas and books to read at bedtime. Every day for over a week, the bus is stuffed from front to back, floor to ceiling.

Kucera rides along as often as he can. His favorite stops are at elementary schools on Pajama Days when the children, who come decked out in their own nightclothes, happily toss their donations on board. "Kids love the idea of helping other kids," he says. The pj's and books are sorted by volunteers, then delivered to the shelters before Thanksgiving.

How it all started

The Pajama Program, now a nationwide nonprofit organization with 79 chapters in 42 states, began 10 years ago when marketing executive Genevieve Piturro volunteered at a New York shelter for children who were abused or abandoned. After reading to a group of kids one night just before they went to sleep in a roomful of makeshift beds, she noticed that they didn't change their clothes.

Horrified, Piturro bought 12 pairs of pajamas and took them with her on her next visit. She then started asking friends, relatives and colleagues to contribute more. As word spread about her project, people from all over the country began to send pajamas and ask how they could start up a program in their own neighborhoods. Before long, Piturro quit her job to work full time on her new passion as executive director.

Today, each of the chapters organizes its own drives, pickups and deliveries to a list of approved children's facilities in its area, with just about all of the work done by volunteers. To date, almost 1 million pairs of pajamas and half a million books have been given to children.

Meanwhile, David Kucera is looking to stuff his bus with at least 5,000 pairs of pj's and 2,500 books when it starts collecting items in October. "Then I'll go along to some of the shelters to watch the kids get their pajamas. It's worth everything to see the smiles on their faces."

Also of interest: Fun ways to give back. >>