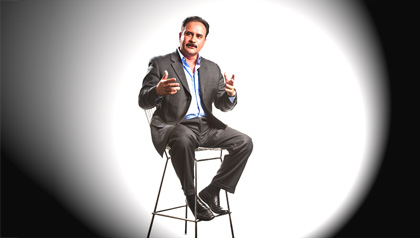 En español | Hector Cortez remembers his options at Chicago's Lake View High School: Be a Latin King, a Latin Eagle or lose his lunch money at the hands of other gangs.

Cortez chose the rougher, tougher Kings, a choice that led him, ironically, from street life into a private Christian college, ordination as a Baptist minister and leadership in the nonprofit world.

Nearly four decades after a mentor changed his life, the former gang member now changes others' lives through his role at Big Brothers Big Sisters of America, a national mentoring organization based in Philadelphia.

"You come to a point in your life when things just fall into place," says the Puerto Rico native, 55. "Being chief diversity officer is an opportunity for me to bring together my life experience as a Latino and as a professional in the nonprofit world."

More than 18 percent of the organization's young participants, but only 8 percent of the mentors (called Big Brothers and Big Sisters), are Latino. In his job, Cortez — who has also worked at Esperanza, a Latino faith-based community development organization, and American Baptist Churches USA — supervises national mentoring directors in recruitment, fundraising and strategic planning in communities of color. His goals: to increase the organization's relevance to Latino, African American and Native American communities, and to make sure every child who needs a mentor gets one.

When Cortez was a teen, a persistent Baptist pastor, Rev. Modesto Lopez, redirected the boy to a new life by focusing on getting the Latin King off the streets. "I was like a father to him," says Lopez, 83. "Now he's a great leader."

The young, brash Cortez initially found the minister's overtures "a nuisance," but later grew fond of him. His own dad had died at age 33, leaving behind a 28-year-old mother with six children.

Lopez arranged a scholarship for Cortez to attend Judson College (now Judson University), where he earned a bachelor's degree in human relations and anthropology. The pastor helped the student through his college years, offering him money for lunch, gas and even car repairs. Later, Cortez obtained a master's in divinity degree and married. He and his wife, Noemi, have three children.

Cortez never forgot the lessons Rev. Lopez taught him. "The greatest gift is to give to the world. He instilled that in me through his example," Cortez says. "I was intoxicated by the transformations he brought forth in me and others. I still am."

And he practices Lopez's example in his own life, guiding others along new paths.

One example is Eli Hernandez, an ex-con who had turned to religion when he met Cortez at a training session for Baptist ministers in the mid-1990s. Brand-new in his role as pastor, Hernandez looked to Cortez for direction. "I wanted to become something like Hector," says Hernandez, now director of Lutheran Services, Florida. "I would not be developed as a leader if it were not for him."

You may also like: Set your sights on a higher education.