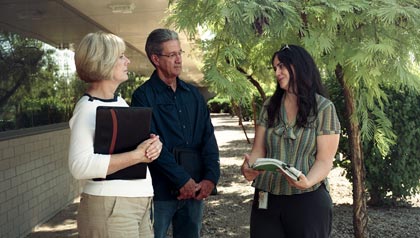 Volunteers Marquetta and Bob White, of Mesa, talk to Star Felty, right, of the Guardian Review Program. Felty hopes to recruit 50 others to check on the welfare of adult wards of the court.

Dawn Savattone received an urgent phone call from a man who had been moved into a care home by his daughter. The other residents, he complained, had advanced dementia. He had no one to talk to, and he felt isolated.

He wanted out of the group home, but his daughter didn't agree. A court had appointed the daughter as her father's guardian, so she had the final say in the matter.

Savattone, an ombudsman at Phoenix's Area Agency on Aging for 14 years, listened with experienced ears. She knew how to alert the court, which replaced the guardian. Savattone also was able to find a different care home for the man.

See also: Can a court-appointed conservator be sued?

The man was lucky to know whom to call. Thousands of more vulnerable wards of the court can't call or can't communicate because of dementia, Savattone said.

People are provided with guardians when it's decided by the courts — often after a request by a relative — that they are incapable of caring for themselves, frequently because of dementia.

On behalf of the wards, guardians make decisions that most people make for themselves about housing, food, medical care and finances.

When it works well, the guardian helps ensure a safe life for someone who can't manage alone.

But that doesn't always happen, and wards "can be victims of abuse, neglect or exploitation — and no one knows," Savattone said.

No agency regularly checks on the wards unless someone brings a complaint to adult protective services, to the courts or to an ombudsman like herself, Savattone said.

That's about to change, thanks to a newly revitalized program in Maricopa County to send volunteers, called "court visitors," into the homes of wards of the court, who usually live with family members or in a care home.

Next: How many cases of guardian abuse are there in Arizona? »

The goal of the Guardian Review Program (PDF) is to visit each ward of the court every 24 months, said Star Felty, volunteer coordinator for the program.

About 50 volunteers are being recruited to become court visitors. They receive a half day of training followed by on-site visits with court staffers or more experienced volunteers. Volunteers provide their own transportation but receive mileage reimbursement. A criminal history check is conducted on all volunteers.

Maricopa County's Guardian Review Program began in 1992 with the assistance of an AARP Foundation grant. It operated with about 30 volunteers until county budget cuts in 2007 reduced its staff by about a third.

Sylvia Stevens, 84, of Mesa, served as the committee's AARP Arizona volunteer representative and pushed for the revitalization of the visitor program.

There are no official estimates of how many cases of guardian abuse there are in Arizona, but Felty estimated that three or four out of every 100 visits over the last several years by investigators and court visitors have identified "issues of concern" in the guardianships.

Marquetta White, 60, of Mesa, a state government retiree who earned a master's of social work in May from Arizona State University, believes volunteering as a court visitor will put her new skills to work.

She recruited her husband, Bob, 61, a retired city of Mesa parks and recreation department director. They were trained last summer.

"The program is giving us responsibility and a chance to impact a person's life," he said.

For more information on volunteering as a court visitor, call Felty at 602-506-8200 or send an email to grp@superiorcourt.maricopa.gov.

Maureen West is a writer living in Phoenix.