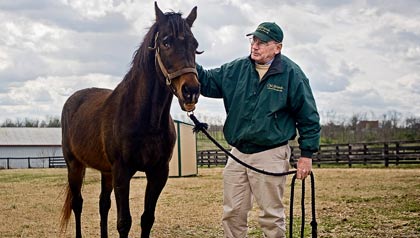 Michael Blowen raises funds for his sanctuary by selling canvases — Moneighs — that his retired and rehabilitated racehorses, like Clever Allemont, pictured, have painted.

Michael Blowen might place a bet in this year's Kentucky Derby, although he thinks the sport of horse racing has its imperfections. Once a movie reviewer for the Boston Globe, the 64-year-old has been devoting his life to saving retired racing champions since 2002.

Blowen's Old Friends sanctuary in Georgetown, Ky. — along with another affiliated farm near Saratoga Springs, N.Y. — is home to 100 horses that have won a combined $75 million during their racing lives. He was originally inspired to start Old Friends when he learned that a famous Derby winner, Ferdinand, died in a slaughterhouse in 2002.

"I discovered that when horses couldn't race anymore, that was often their fate," he says. "They should be collecting Social Security or a 401(k), but they don't."

Blowen raises money through contributions, daily tours and selling horse art, or "Moneighs," created by the animals themselves by dipping their muzzles, whiskers or tails in paint. Celebrity donors, including Jack Nicholson and Anjelica Huston, have contributed their own artworks to benefit Old Friends.

Until a local television station revealed his obsession with race horses, Blowen lived a double life of sorts in Cambridge, Mass. Early every morning before reporting to his job at the Globe, he worked as a racehorse trainer.

"I fell in love with the animals," he says, and soon he surrendered his heart — and life — to them.

"When I retired, I came down to Lexington, Ky., to do a story about the horses that were being cared for by prisoners from the Blackburn Correctional Complex. Then, in 2001, I got an offer to be operations director for the Thoroughbred Retirement Foundation. I thought it would be terrific."

Michael's wife, Diane White, also a Globe columnist, wasn't exactly happy about leaving New England. He recalls her jokingly telling him, "You have to promise me that when I leave you, you won't come looking for me." But they're still very much together today.

After a year and a half, Blowen left the foundation and started Old Friends. While not many other sanctuaries are eager to take in stallions — they tend to be feisty and difficult — Blowen is proud to have them.

There is passion in his voice when he relates stories about his beloved champions. Clever Allemont, for example, had won his first six races, and it was thought he'd be a favorite to win the Derby. Then the original owner sold him, and he never won another race.

"He disappeared, went into breeding programs for awhile," Blowen says. "A woman in Kansas paid $200 for him at a slaughter auction. She put him in a trailer in the middle of winter in Kansas, and by the time he arrived in Kentucky we thought we'd have to euthanize him. When he got off the truck, I felt so bad for this horse, all skin and bones, his muscles atrophied. Fortunately, we have a wonderful vet and he suggested giving him some time to recover.

"Now he's out on the field, gained 312 pounds. One eye works and he's deaf, but this horse is having a ball, he's a highlight of our tour and he loves children!"

Many horses aren't as lucky as Clever Allemont. The fate of those that no longer race or breed is not new. Horses who outlived their keep were flown to Japanese slaughterhouses. Now they're sent to Canada or Mexico — there are no U.S. slaughterhouses although horses can be auctioned for slaughter in the States. The trip in the van is long and punishing, and by the time the animals arrive at the slaughterhouse, Blowen says, "they're happy to get a bullet in the head."

While in their prime, thoroughbreds may also be castrated. "There are not many days I don't weep," he says.

When asked about horse racing, Blowen says he believes the sport could easily be improved. "Thoroughbreds shouldn't race on drugs, shouldn't be whipped. It's not that hard to fix," he says.

Yet, it's apparent that Blowen still loves the sport and the horses.

"My greatest thrill is in the morning when I get up and feed these horses and they run with me," he says. "Just the pure joy of it, because that's what they were bred to do, and they love it, they love it!"