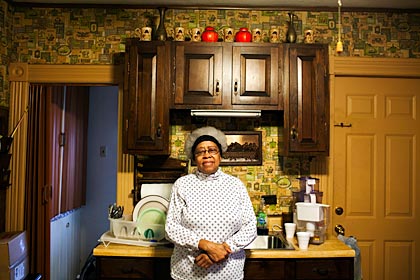 Christine Cuffie, 71, a retired cook from Springfield, and her husband don’t qualify for food stamps, but they meet Open Pantry’s food pantry income guidelines for people 55-plus.

The subzero temperature did not deter Christine Cuffie. The 71-year-old retired cook was among dozens of people in line the one day a month when people 55 and older got exclusive access to the groceries at Open Pantry's Emergency Food Pantry in Springfield.

"I like fresh vegetables and fruits when they have that," said Cuffie, who arrived at 8:30 a.m. and was 10th in line for the food pantry's 9 a.m. opening. Others waited nearly an hour.

Cuffie and her husband have lived in the same Springfield house for 45 years. She said they do not qualify for food stamps, but they do meet the pantry's income guidelines.

While Social Security has not increased in two years, she said, "everything else has, including trash fees."

Candace Larger, director of the pantry, said people on a fixed income are at a disadvantage. "Seniors have really taken a hit."

She said heating, food and prescription costs have all risen. "The health costs have just exploded for people."

In 2003, according to Larger, older people constituted 11 percent of those served by the pantry. That number rose to 26 percent last year.

To help combat hunger among older people, AARP Massachusetts, as part of its Create the Good initiative, has been holding food drives and encouraging its 800,000 members to take action. Two food drives in Springfield last fall collected nearly 1.5 tons of food.

For example, Fitzgerald, a lifelong resident of Springfield, said the members of her quilting guild bring food items to donate at each of their monthly gatherings.

Michael Patashnick, 63, of Springfield, who recently retired from the Department of Children and Families, was among the AARP volunteers who helped collect food outside a supermarket during one of those drives.

"I was very impressed with the amount of food we did collect" and the number of donors, he said.

Patashnick also said he was pleased to see AARP organizing such an event beyond Boston and its suburbs.

The Greater Boston Food Bank feeds as many as 545,000 people a year through about 550 outlets in eastern Massachusetts.

Stacy Wong, its public relations manager, said the demand continues to grow. The U.S. Department of Agriculture estimates that one in 10 people in Massachusetts is in danger of going hungry.

"Hunger is a growing problem. Technically, the recession may be over, but it doesn't feel over to a lot of people," Wong said.

At Open Pantry, Cuffie left with two bags of groceries. Though disappointed there were no fresh vegetables, she was grateful for the food she got.

Larger said the pantry usually serves about 120 on Senior Day, the third Monday of each month. People 55 and older may use the pantry 12 times a year; others are limited to six visits.

Some of the clients arrive at the food pantry in the Golden Age Club van operated by the Springfield Department of Elder Affairs.

"So many people are struggling today," Larger said.

Jean Lang is a writer living in Milton, Mass.

Volunteer with AARP in Springfield to help fight hunger and build our community. You can also donate to a food pantry or start your own food drive in your community. To learn more, go to AARP Massachusetts' website or call 1-866-448-3621 toll-free.