En español | Some food trends come and go quicker than you can learn to spell "quinoa," but we found five for 2013 that we think have staying power.

We're eating less meat — the USDA predicts that the average American will eat 200.2 pounds of red meat and poultry this year, down from 221.6 pounds in 2007. But when we do eat it, we want it to be top-notch. Quality-conscious carnivores are fueling a trend in upscale butcheries, which tend to be stocked with hormone-free, locally raised, grass-fed meats, artisanal sausage and fancy charcuterie. 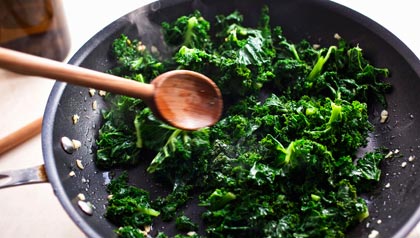 As people cut back on meat, vegetables are becoming the main event. The government's new "MyPlate" illustration of recommended food groups calls for half your plate (read: half your diet) to be fruits and vegetables. Consumers seem to be taking the advice to heart, while starting to cook with some formerly underappreciated greens, such as vitamin-rich kale, sea vegetables (nori and kelp) and brussels sprouts — which, we must say, are scrumptious roasted.

Veggies are also being sipped. The hottest kitchen accessory these days is the juicer — an appliance that separates the liquids in raw fruits and vegetables from their slimy pulp, with the idea that the body can absorb more vitamins from food in this drinkable form. New juicer recipes abound, including one of our favorites, "Get-Up-and-Go Juice," a blend of carrots, apples, cucumbers, beets and ginger. Yum.

Ancient seeds as alternatives to wheat

As more people go gluten-free, they're turning to seeds that taste like grains ("pseudo-cereals," they're called), especially quinoa: Slightly bitter, protein-packed and revered by the ancient Aztecs, quinoa is increasingly being used in place of rice or as a central part of a meal. Chia, meanwhile, formerly famous only as the green "fur" on those jokey Chia Pets, has seeds that are touted for their health-boosting antioxidants, protein and omega-3 fatty acids. You can now buy chia pasta, chia snack bars and chia-seed drinks — and make your own chocolate chip chia cookies.

Every trend tracker in the country is going gaga over popcorn: Americans already gobble down about 16 billion quarts a year of the puffy treat, which is now far more than just a greasy movie theater munchie. You can find popcorn on dessert buffets at wedding receptions, in gourmet shops (with flavors such as wasabi, beer and Indian curry) and in natural food stores. It is, after all, a whole grain, and air-popped it's only 31 calories a cup. (Of course that's before it's smothered in bacon and blue cheese sauce.)