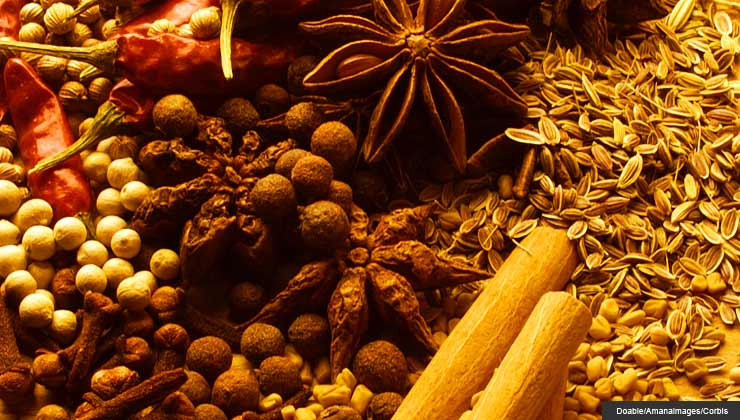 En español | In ancient India, cloves were believed to help toothaches, a theory that holds true today. Ancient cultures have long supported the use of food as medicine. Spices and herbs in particular can help protect us from illnesses and heal us from common ailments.

Today, professionals from alternative healers to nutritionists are rediscovering the benefits of herbs — and almost every day new research confirms much of the ancient wisdom surrounding spices. Gurpareet Bains, author of Indian Superfood, says that recent Agriculture Department research shows that nearly a quarter of the top antioxidant-rich foods are, in fact, spices.

During the cold winter months, many spices and herbs offer taste as well as cold- and flu-fighting properties. "Cinnamon and cloves contain potent antibacterial, antiviral, analgesic and anti-inflammatory properties — perfect for the winter months, and far tastier than cold and flu drugs," says Bains.

We picked a few spices that play well with winter foods, such as root vegetables, stews and soups, and asked leading spice experts to tell us the health benefits and how we can incorporate them into winter meals.

Warren Sheir, co-author of Ancient Wisdom, Modern Kitchen: Recipes From the East for Health, Healing, and Long Life, notes that sage, a European and Mediterranean herb, often is used as a topical antiseptic, such as a mouthwash to treat inflamed gums or as a gargle to help a sore throat. This claim is supported by a 2006 study published by the European Journal of Medical Research.

Sheir advises using fresh sage instead of dried where possible. "Sage is one of the many herbs where the real 'medicinal' component is found in the oil, and the oil is found only in fresh sage," he says

Usage: Sage is a hearty herb; a flavor enhancer for stuffing, sautéed mushrooms, roasted tomatoes, roasted butternut squash or pumpkin, baked apples, or roasted peaches. Try it in meat stews or let the herb steep in hot water to make a tea.

Kami McBride, of the Living Awareness Institute and author of The Herbal Kitchen, says, "Cinnamon may help you digest the nutrients in food. It increases the flow of blood and oxygen to the digestive tract, improving your ability to digest proteins and fat." Two 2006 studies show that it is a powerful antioxidant and able to lower cholesterol, triglycerides and glucose. Another study ranked cinnamon as fourth out of 500 foods highest in antioxidant content.

Usage: Make a cinnamon-honey condiment with 1 cup honey and 3 tablespoons ground cinnamon. Store in a covered jar and use on pancakes. "At our house, we keep this honey on our kitchen table and put it on morning toast and oatmeal. It also makes a delicious digestive tea or flavoring for pancake batter and muffins. Spreading cinnamon honey on your morning toast can warm you up on a winter morning, reduce your susceptibility to a cold and stimulate digestion," says McBride.

Cinnamon is also great in savory dishes such as lamb stews, rice casseroles, ratatouille and moussaka.

Connie Guttersen, author of The New Sonoma Diet, talks about the benefits of using rosemary in your diet because of its carnosic acid, a powerful compound that acts as an antioxidant to protect the brain, lowering the risk of strokes and neurodegenerative diseases such as Alzheimer's and Lou Gehrig's — thinking that has been corroborated in a study by the Burnham Institute for Medical Research in California.

Fresh and dried rosemary contain the same nutrients but they vary in quantity. For example, fresh rosemary is a good source of the chemical manganese; however, some of the manganese is lost through the drying process. (Manganese helps with various metabolic processes.)

Usage: Rosemary is complementary to beef, poultry, pork, potatoes and olive oil. When cooking with fresh rosemary, finely chop the needles to release their natural oils. As a woody plant, more robust stalks can be used as a skewer for grilled foods once you've used the leaves. The rosemary stalk will continue to infuse foods with rosemary's natural flavor, but with milder intensity.

Sarah K. Khan, an ethnobotanist who teaches classes on spices of the world at the Natural Gourmet Institute in New York, notes that, traditionally, cloves have been used as a topical anesthetic to treat toothaches. "In fact today, a clove gel provides dentists with an alternative to benzocaine for topical anesthesia in their daily practice," Khan says. A 2006 study found that clove extract improved the function of insulin and lowered glucose.

Always buy whole cloves. If you buy them ground, the oils will dissipate or potentially go rancid.

Usage: Before using, pound cloves gently in a mortar and pestle or grind in a spice grinder. Try black or green tea with cloves: gently crush 1 or 2 cloves with a pestle; place in a mug with a few green or black tea leaves; cover with boiling water; brew for 2 to 3 minutes, and sip. Add a dash of clove powder and ground cinnamon to hot chocolate.

Use it as a partner with cinnamon in baking, in stews and in soups. You can also add it to barbecue sauces, make syrup with some sugar and use it in cocktails or as a way to add flavor to plain old white rice (add a clove or two toward the end of the cooking process).

Bains enjoys cooking with nutmeg and notes that it is well-documented in the Indian science of life, Ayurveda, for its capacity to treat diarrhea. Nutmeg has also been shown to have antimicrobial properties (in a study by Cornell University).

Usage: Sprinkle into hot milk or onto the top of frothed milk for European-style coffees such as cappuccino. Add a pinch to soups and stews. The best way to bring out the flavor of nutmeg, as well as increase its antioxidant value, is to heat it in a little oil first. That also takes away much of its natural bitterness.