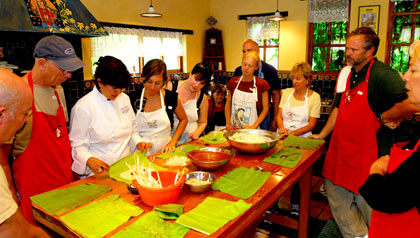 Whichever program you choose, the cuisine likely reflects the chef’s own time-honored family recipes or a penchant for particular regional dishes. So expect everything from a variety of moles—a favorite dish throughout the country—to simpler rice-based dishes and stews. Here’s a sampler of cooking schools you might want to taste test.

Seasons of My Heart Cooking School in Oaxaca

Head to the southern state of Oaxaca, one of Mexico’s culinary capitals. That’s where you’ll find Seasons of My Heart Cooking School, run by Susana Trilling, a Philadelphia native who has spent most of her life in Mexico and today is considered one of the country’s top chefs. The program, housed on a ranch located between two villages just outside the state’s colonial capital, features a large, rustic colonial kitchen with adobe walls, hand-painted tiles, and 12 prep stations.

Trilling likes to tap local talent, sometimes inviting residents from the nearby towns of San Lorenzo Cacaotepec and San Felipe Tejelápam, a Zapotec village revered for its large handmade tortillas. The village women demonstrate their skills, and the oversized tortillas are used to make tlayudas, Oaxacan-style tostadas usually spread with chicharón (pork cracklings) grease and a layer of bean paste and string cheese.

Trilling focuses on pre-Hispanic specialties: rice spiked with chepil, a popular indigenous herb; black and yellow moles; and Oaxacan chocolate pudding, which features raisins, coffee, and a splash of Cointreau—that last ingredient a special Trilling twist. Recipes from the state’s hot and humid coast include a soup incorporating fresh small shrimp and cactus. Off-site excursions take you, in August, on a wild mushroom hunt and, at the end of October, on a weeklong, hands-on program celebrating Día de los Muertos (Day of the Dead) and its customary chocolate-based dishes and colorful altars.

While her specialty is combining ingredients, the chef says she also enjoys “seeing a mix of people of all ages come together and bond over food.” But there is one drawback: Trilling acknowledges that not all the dishes explored at her school can be exactly replicated back home. Most folks won’t be able to toast chiles using a clay comal (griddle), like the one at Seasons of My Heart, for instance. “Some dishes are more esoteric and will be more about a unique, one-time experience rather than something to make at home,” she explains.

Further north, in the picturesque colonial city of San Miguel de Allende, chef Patricia Merrill Márquez applies what she learned as a child from her mother and grandmother. Her Arcos del Atascadero Bed & Breakfast, founded in 2001, offers multi-day cooking courses specializing in central Mexico classics such as tortilla soup and guisado (beef stew), along with more general favorites such as chiles en nogada, a colorful blend of stuffed poblano peppers topped with a creamy nut sauce and pomegranate seeds; and chilaquiles, a breakfast dish that bathes tortilla strips in salsa, chiles, and cheese.

She also lets guests explore her garden, picking its herbs and using banana and avocado leaves to encase and cook fish. Merrill and her 22-year-old daughter and business partner, chef Mónica Navarrete Merrill, also lead guests out of the kitchen to explore the variety of fondas, or family-run kitchens, that are open to the public and found in small villages or along roads throughout Mexico. “People can be afraid of fondas, thinking they are too close to street food and might get sick,” says Merrill. “We show people that these small kitchens can also produce wonderfully prepared food.”

Next: Passion and culture in Morelos.>>

Merrill isn’t surprised by the steady stream of Mexican Americans who visit her cooking program. “There are always tejanos and other Latinos participating, folks who naturally want to learn more about their roots and traditions firsthand,” says the 55-year-old, who is herself Mexican American. To round out her guests’ experiences, she also offers lectures on the history of Mexican food and how to use traditional cooking tools such as a molcajete, a stone version of the mortar and pestle, to make salsa or grind spices.

About an hour south of Mexico City, you’ll find the colonial village of Tepoztlán, home to La Villa Bonita Culinary Vacation, a cooking and travel program situated on a private estate. Husband-and-wife team Ana García and Robb Anderson established La Villa Bonita in 2000, when they translated García’s passion for cooking and the skills passed through generations into a business combining cultural immersion with crash courses in Mexican cuisine.

Heading to Tepoztlán’s open-air market with García to select the day’s vegetables, fruits, spices, and meats was a highlight for Mary Carlon, who with her husband stayed at La Villa Bonita last August. “Ana offers these wonderful details about all the food on display,” says the 55-year-old retired teacher’s aide, who lives in Scottsdale, Arizona. Being Mexican American and discovering more about her culinary roots was another thrill. “I’d only been to Tijuana before this trip,” she says, referring to the Mexican border town.

Back in La Villa’s kitchen, students keep busy practicing tortilla techniques, smoking chiles, and using a molcajete crafted from volcanic rock. “We hustled!” Carlon says. That is, she adds, until after the big meals when she and others in the group succumbed to post-lunch fatigue and took a siesta. “It was just the right mix of activity and relaxation,” she recalls fondly.

More Than a Cathedral

When García and Anderson created their culinary vacation package, it was considered a novelty. “Now, it’s become more mainstream,” Anderson says. More than half of their guests are between the ages of 45 and 65, he adds, with about one-quarter of them Hispanics living in the United States.

Maryles Casto, CEO of San Jose, California-based Casto Travel, says that cooking programs like these three are tapping travelers’ desires to do “more than just tour a cathedral.”