TV has a new Perry Mason, and he's nothing like the one Raymond Burr played from 1957 to 1966. Today's Mason is a troubled World War I veteran trying to find himself in 1932 Los Angeles, the topsy-turvy era of scandal-plagued actors, radio evangelists and daredevil aviatrixes, many based on real people of the period. “It's a history buff's feast,” says John Lithgow, 74, who portrays E. B. Jonathan, Mason's lawyer boss, in the eight-episode series Perry Mason (HBO, premiering June 21, 9 p.m. ET). “There's an authentic old-movie snap to it,” he explains, “and we did our variation on the classic Perry Mason moments.”

But if you want to see moments like the classic ones where a witness breaks down weeping and confesses under the onslaught of Raymond Burr's courtroom rhetoric, forget it. “When people say, ‘Oh, I'm so excited that they're going to do Perry Mason again, I've always loved that show,’ I'm hesitant to tell them how different ours is going to be — in fact, it's just the opposite. To me, that's what makes the whole project so exciting.” Think of it as a Perry Mason legal drama — a grisly child-kidnapping case — crossed with Raymond Chandler and Chinatown.

"This Perry's not this perfect lawyer,” says Matthew Rhys (The Americans), 45, who plays Mason. He's a shady private detective learning the ropes from Jonathan. “They have a taunting friendship,” Lithgow adds. “Jonathan thinks of himself as quite a grandee, with all of these city connections, all sorts of strings that he can pull. And bit by bit as the story unfolds, you realize he's not nearly as good at this as Perry is. You see Perry Mason outgrow his mentor, deciding, ‘Wait a minute. I can do this a lot better.'"

Far from Burr's towering, Abe Lincoln-like figure of righteousness, the new Perry at first resembles Danny DeVito as the sleazy tabloid reporter in L.A. Confidential, making a tenuous living by snapping photos of movie stars in compromising situations that violate the morals clause in their contracts, so the studios will pay him to go away.

"He's mired by great flaws, but underneath it all he has this striving for justice,” says Rhys. “We have a lot of legal advisors on the set, and it is a little more realistic [than the original show].” 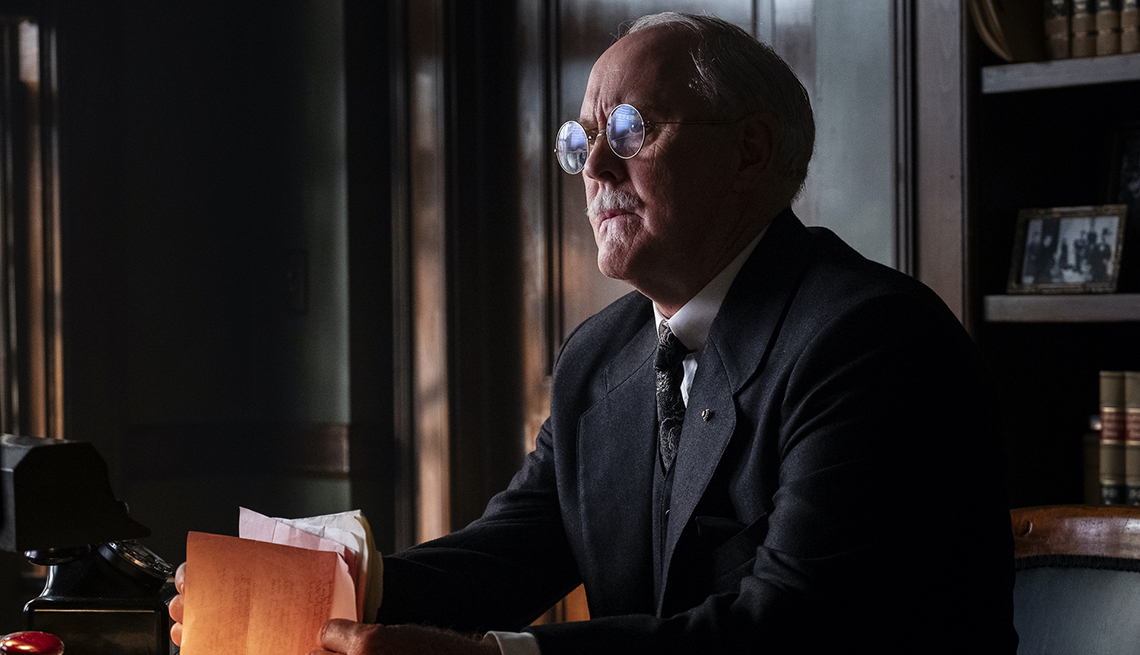 Lithgow says Perry Mason also reflects the fact that A-list talent is flocking from movies to TV these days. “Our director Tim Van Patten is a major figure in the revival of high-quality television — he directed for The Sopranos, The Wire and Boardwalk Empire. He's superb.”

Lithgow loves the show's intergenerational drama — the old pro teaching the youngster. And he also loves what aging has done for his own career: He's earned five Emmys since turning 50. “It's a good thing to grow old and know you've accumulated a lot of experience to get over your fears,” he says. “I know who I am by now.”

Next up for him is another project with an eminent costar, though filming was halted during the pandemic. “In the miniseries The Old Man, Jeff Bridges and I play two ex-CIA operatives who did something in Afghanistan 30 years before, which has come back to haunt us in the present day.” It reminds him of classic bromances, “like Jack Lemmon and Walter Matthau in The Odd Couple, or Joel McCrea and Randolph Scott in Ride the High Country.” With recent high-profile roles like this, plus Winston Churchill in The Crown and Roger Ailes in Bombshell, says Lithgow, “Speaking personally and about my own career, I just feel like things are better than they've ever been. Things have been better since I turned 70 than they ever were before."