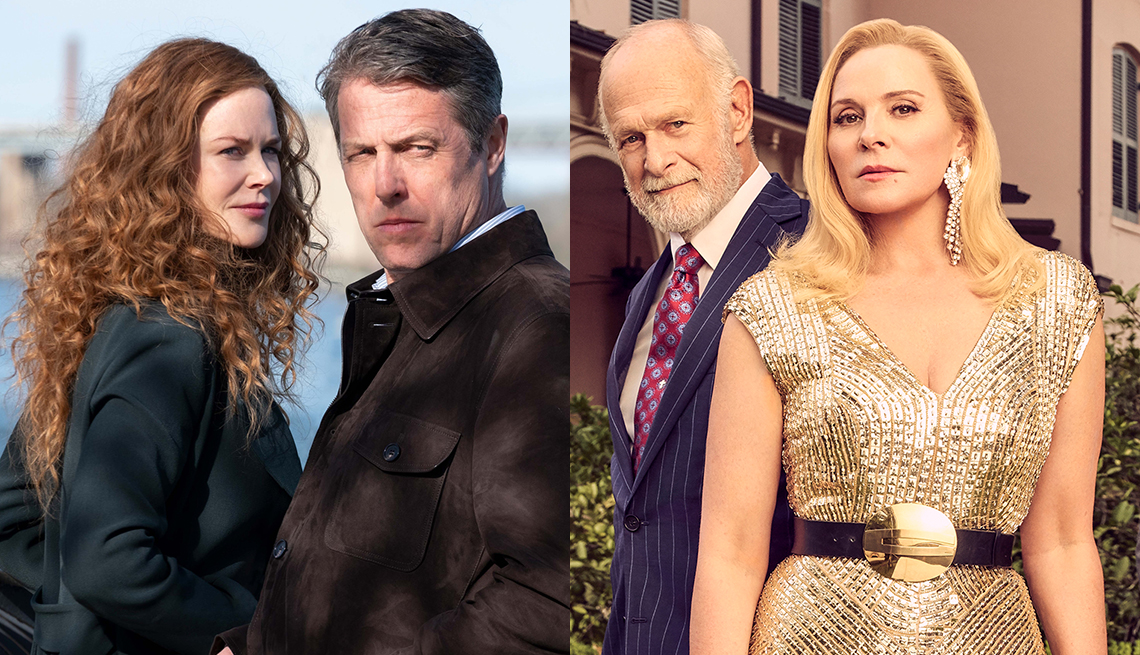 Remember pilot season? By this time last year, broadcast networks were jammed with ads promoting the glories of their fall schedules, and we all marked our calendars to catch series premieres from one end of the network universe to the other. But this year, as the novel coronavirus pandemic interfered with productions at every level (and continues to do so), we're left heading into TV's most exciting season with a frustrating blend of vague plans, fervent hopes and scarcely any clips to show.

So what will fall TV this year have to offer?

First — and perhaps predictably — expect a heftier than usual number of returning series (whose own productions come with hope that a flattening of the virus's curve will allow shooting in the late summer/early fall). Second, among the crop of new series on the docket, at least a dozen are currently nothing more than a title with scripts, staffing and fingers crossed that production can crank into gear at some point soon. That's a whole lot of hope and not a lot of certainty. But that's 2020 for you.

Here's what we know now about the fall TV season:

Amazon and Netflix prepare to roll out six new shows

Hilary Swank, 45, stars in a new series from Ed Zwick (thirtysomething, Once and Again) and Jason Katims (Friday Night Lights, Parenthood) about a female astronaut preparing to lead a team on a mission to Mars.

A thriller about young comic book fans who follow a graphic novel's conspiracy theories down a rabbit hole is an adaptation of the 2013 UK series by Gillian Flynn (Gone Girl). John Cusack (High Fidelity) and Rainn Wilson (The Office), both 54, star.

Ryan Murphy amasses a typically amazing cast — including Cynthia Nixon, 54; Judy Davis, 65; Sharon Stone, 62; and Amanda Plummer, 63 — in a series that stars Sarah Paulson, 45, as the formidable asylum nurse played by Louise Fletcher in 1975's One Flew Over the Cuckoo's Nest.

The newest project from Jenji Kohan (Weeds, Orange Is the New Black) is a scripted anthology series whose stories reflect our new normal, looking at how the pandemic has affected people from a wide range of backgrounds.

The first Netflix project from Shonda Rhimes, 50, and Betsy Beers, 62 (Grey's Anatomy, How to Get Away with Murder), an adaptation of Julia Quinn's best-selling series of novels, is set in the high society world of Regency London. At 84, Julie Andrews leads the cast.

The TV writer behind such ‘90s hits as Chicago Hope, The Practice and Ally McBeal, David E. Kelley, 64, roared back to the spotlight in 2017 with HBO's Big Little Lies. Nicole Kidman, 53, a star and coproducer of that Emmy winner, returns on his next HBO project, about a professional woman whose home life (with Hugh Grant, 59) begins to crumble. Donald Sutherland, 85, also stars.

Just about the only new broadcast drama scheduled for the fall also comes from Kelley. An adaptation of the 2013 thriller The Highway by C.J. Box, it stars Kylie Bunbury (Pitch) and Katheryn Winnick (Vikings) as an ex-rodeo rider turned private detective and an ex-cop looking for a pair of girls kidnapped by a truck driver on a remote Montana highway.

The 1980s crime drama that also became a movie franchise for Denzel Washington has Queen Latifah, 50, as the former secret agent using skills to help those with nowhere else to turn. The new version also stars Chris Noth (Law & Order) and Lorraine Toussaint (Rosewood), both 65.

The game show, which first ran on ABC in the mid-1960s and was revived on cable in the 1990s, is back for a new incarnation reflecting modern shopping methods, with Saturday Night Live comedian Leslie Jones, 52, hosting.

Jared Padalecki of Supernatural turns Texas Ranger in a reboot of the old Chuck Norris series, set in Austin; with Lindsey Morgan (The 100), Jeff Pierre (The Rookie) and Mitch Pileggi, 68 (The X-Files).

The first SVU spin-off (and the seventh Law & Order overall) focuses on Elliot Stabler — the detective Christopher Meloni, 59, played on the show from 1999 to 2011. Here, he comes out of retirement to head an organized crime task force for a show that doesn't yet have a permanent title.

The latest sitcom from Chuck Lorre (The Big Bang Theory, Mom) stars Thomas Middleditch (Silicon Valley) as a newly divorced therapist who gets a kidney donation from a wild woman played by Broadway's Annaleigh Ashford (Masters of Sex). Sara Rue (Less Than Perfect) and Kether Donahue (You're the Worst) are also featured in the one new show where a pilot was actually shot before the production shutdown.

Kyra Sedgwick, 54 (The Closer), stars as an empty nest mom who wants to go live with her kids in a new comedy from Kari Lizer (The New Adventures of Old Christine). Also starring comedian Rachel Sennott (High Maintenance) and Joey Bragg (Liv and Maddie).

Transplants come to Fox and CW

The offshoot of the Bad Boys movie franchise — focusing on two female cops played by Gabrielle Union and Jessica Alba — ran as the first original series from the Spectrum cable system. Its second season will start there later; the first season, which ran March–June 2019, will replay on Fox. Among its cast is Ernie Hudson, 74 (Ghostbusters).

The latest extension of the 1980s Carl Sagan science series, produced in part by his widow Ann Druyan and Seth MacFarlane, ran on National Geographic in April and May, hosted by Neil deGrasse Tyson, 61.

The superhero horror series (not connected with the 1991 show of the same name) was created for the DC Universe streaming service but was canceled shortly after its premiere in late May 2019. Crystal Reed (Teen Wolf) leads a cast that includes Virginia Madsen (Designated Survivor), 58, and Derek Mears, 48 (Friday the 13th).

Tell Me a Story (CW)

The horror anthology from Kevin Williamson (The Vampire Diaries), which updates fairy tales as thrillers, played two seasons on CBS All Access from October 2018 to February 2020 with participation from actors that include Carrie-Anne Moss (The Matrix), 52, and Kim Cattrall (Sex and the City), 63, among many others.

Kim Cattrall stars as an heiress of a big televangelist empire in a soap that was originally announced to be a midseason show for the 2019–2020 season. It also features Gerald McRaney (Major Dad), 72; Aubrey Dollar (Women's Murder Club); and Corey Cott (The Good Fight).

A family sitcom starring Will Sasso (Mad TV) and Christina Vidal (Taina) as a couple coping with parenthood and his judgmental live-in mother, played by Jane Curtin, 72 (Saturday Night Live), was to have started in early 2020.

A thriller about artificial intelligence gone bad stars John Slattery (Mad Men), 57, as a tech inventor trying to prevent an impending robot takeover. It was created by Manny Coto, 59 (24, Dexter). With the series having been held back half a year, it will be interesting to see if the AI portrayals feel dated or not.

Season 32 of the popular reality competition wrapped production way back in 2018, and was to have premiered this spring. But with Season 33 suspended and no green light for a fall edition of Survivor, CBS is saving its last complete season of a reality series for the fall.

Serinda Swan (Ballers) stars as a recently widowed coroner looking into suspicious deaths in Toronto, based on the popular M.R. Hall novels. Two seasons have been broadcast since premiering in Canada in early 2019, with a third season planned.

A medical drama about a Syrian doctor who fled his country with his sister to practice in Canada was that nation's most-watched series this spring. It stars Hamza Haq (Quantico) and features Laurence Leboeuf (The Disappearance) and Scottish actor John Hannah (Marvel's Agents of S.H.I.E.L.D.), 58.

An international thriller set in the financial world concerns a high-powered trader charged with murder. Based on the novel of the same name by Guido Maria Brera, it features Patrick Dempsey, 54 (Grey's Anatomy) and the Italian actor Alessandro Borghi (Suburra).

A British import about a trio of young video game enthusiasts who get caught up in an online fantasy game called Kingdom Scrolls. Produced by Succession creator Jesse Armstrong's production company.

Plus, 7 programming trends on the (still fuzzy) horizon

While TV series shake themselves out and figure out how and when to film, keep an eye on these trends emerging from the pandemic-driven entertainment landscape:

Given the speed and intensity of events this year, there may be a need to slot more regular news reporting in prime time; the troubled spring has been a ratings bonanza for cable news outlets.

Late-night talk shows, initially rattled by a lack of audience and regular studios, have more recently found their footing in home-produced shows by mixing potent political commentary with more intimate celebrity interviews. There's no reason not to put the shows on earlier at 10 p.m. (except that when Jay Leno tried it in 2009, it fizzled).

Networks may borrow from their streaming services

Shows on CBS All Access are arguably of better quality than those on the broadcast network. How long before the broadcast network gets to share hailed dramas devised for the streaming service, from The Good Fight to Star Trek: Picard? Though CBS did share the first season of The Good Fight last summer, there are no plans to do so again, even to fill possible CBS fall schedule vacancies.

When the lockdown shut down The Blacklist this spring, producers filled in with an animated episode. Others adapted the familiar formats of Zoom calls. Shows will be forced to think even further outside those boxes should the pandemic preclude production.

A pent-up desire to watch TV sports may be blunted by truncated seasons played in quarantined stadiums minus fans. But there may also be a willingness to try some other sport, no matter how unusual. Ultimate Tag, anybody?

Talking over the reruns

One growing trend has been repurposing existing shows by having celebrities get together to talk about what they're seeing, as on Fox's Celebrity Watch Party, a ploy also used on HGTV's House Hunters and The Real Housewives of Beverly Hills,

Fox is scheduling Season 4 of The Masked Singer, assuming it can get into the studio. If not, they may consider socially distanced performances (though by definition the participants will already be wearing masks).