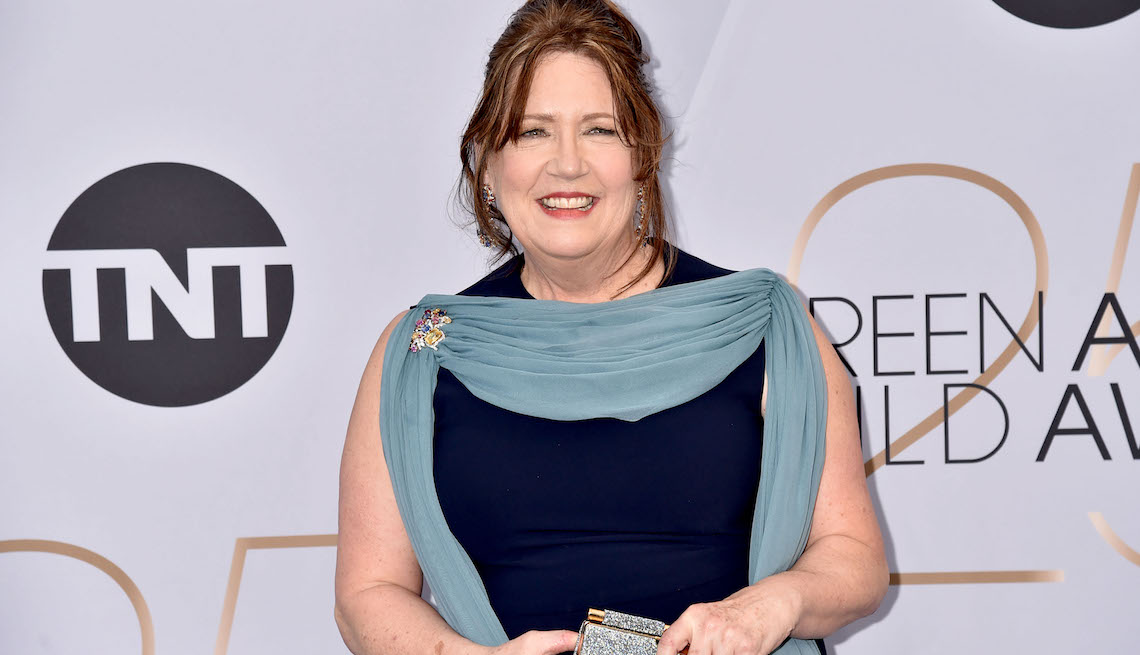 Theater, film, TV — actress Ann Dowd, 63, has conquered them all. Yet after she switched from undergrad premed studies to get an MFA at DePaul’s Goodman School of Drama, it wasn't until her mid-50s that critics and audiences started to give her serious attention: back-to-back Emmy nominations (and one win) for her role as scary Aunt Lydia in The Handmaid's Tale (whose third season starts June 5 on Hulu). Dowd told AARP about her later-in-life success, her tales of Law & Order and her summer travels.

By the book. I read The Handmaid's Tale in college and then again before the series. It stuck with me, and it scared me slightly. There was something about it you couldn't dismiss as sci-fi, and that was alarming to me. As an actor, your job is to jump into the make-believe and make it real. But at end of the day, nobody is missing an eye or a finger. You go home with the freedoms we are living with.

Handmaid's massive success. Boy, you can only hope for such things to occur in one's life. I knew it was very good, but whether it would catch on — it's not the easiest show to watch. It's just too grim. It is very encouraging to be a part of something like that. Not only something that's beautifully done but relevant, that affects people in a way that they are going to put on red dresses, they're going to protest. That's huge and powerful.

Learning about Lydia. It's wonderful to feel close to a character, that you know her and are able to move forward with her. One of the episodes this season was Lydia's backstory. I cannot tell you how gratifying it was to shoot. It kind of broke my heart to do it, but in the best sense.

Her career backup plan. No backup plan. I was pregnant at 35 with my first child, working at a pet shop — how was it I was not panicking? I waited on tables a million times, worked at the pet shop, whatever it took. And it never occurred to me that “You better get another plan going on because you're 35.” I just never allowed myself to dwell there. Ever. I had times where I got drawn into the depression of “Oh my God.” But then I thought, "You got to move out of this, girl, because this was not helpful." It was just that kind of unshakable faith that I was doing what I was meant to do.

Not going Hollywood. I was so unsuited to L.A. I wasn't beautiful and slim. But then I had a series called Nothing Sacred [1997-98], which I loved. I had my second child there. After three years I realized we needed to go home, because the Northeast is home.

Law & Order memories. I loved every experience on that show. They're a class act: Michael Moriarty and Sam Waterston ... phenomenal. Love Mariska Hargitay, also Chris Meloni. I worked with him on Handmaid's [in five episodes of Season 3, Meloni plays the powerful and magnetic Commander Winslow, who hosts Joseph Fiennes’ Commander Waterford on an important trip] . The other guy from the Law & Order mother ship, Jerry Orbach, would give tips like the “walk and talk” down a corridor — which is hard — and he would say, “Start at end of your route, say your lines, and where you end up is where you should start.”

More channels = more power to grownup women. There are so many more opportunities now, and you don't have to be the grandmother, necessarily. There's nothing wrong with that, but to play an independent woman seeking her own life, pursuing what is meaningful to her — it's a great privilege. I'm attached to Lydia. Also, to be able to pay the bills, to have your children go to the college of their choice, to not worry. My daughter is a classics theater major, in every single play at school. My youngest son, 14, would like to be an actor. I don't get involved except to say, “Training.” My oldest boy lives on a working farm for adults with disabilities. He does not wish to be an actor. He wants to be a potter.

Fear of acting. I say, “Follow your passion without question.” When I chose acting, my grandmother, a strict Catholic, said right away: “But this is a hobby dear, isn't it?” I said, “But Grandma, those are the gifts God has given me.” And so she said, “You're absolutely right. I understand.” And that was it.

Advice to her younger self. “It's OK, darling.” When you lose a parent [her dad died when she was 18], then you jump into premed and say, “I'm not going to dwell on that, I'm going to get busy here.” None of those challenges dissipate on their own. You've got to give them the attention they deserve. These are things I've learned since. Maybe that is the process of aging. It's underrated, the joy of realizing, “OK, lets step back a minute here.” Which isn't to say I don't have anxiety and nerves about the work.

To-do list. One thing I'd like to find before I leave this earth is a way to let go of stage fright in the theater, which is the essence of letting go of control and dropping the armor.