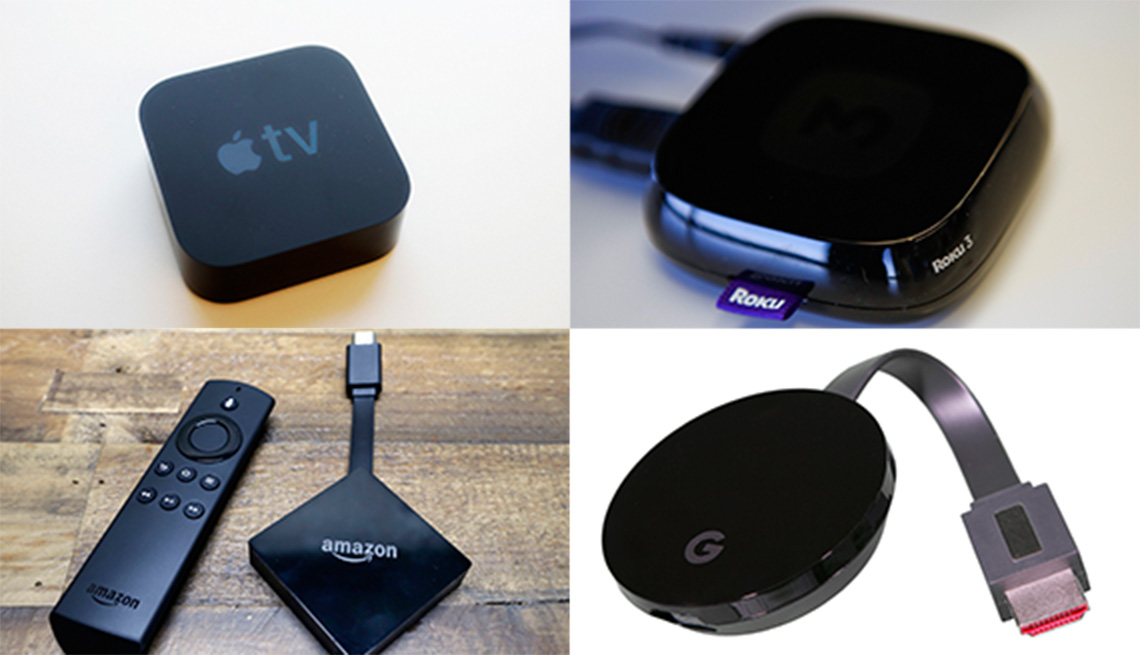 An array of devices is on the market to let you plug the internet into your TV for streaming content.

En español | Once you’ve settled on the right screen for you, it’s time to choose how to feed content to your new video hub. Be aware there’s a seemingly infinite amount of programming available, but it’s spread over a vast array of methods of delivery and services. The accessories you choose will determine how you can curate content to best fit your viewing needs. Here’s what you should keep in mind:

How it happens: Everyone should know how this works. Call the cable guy, who hooks you up. Turn on the TV. Done.

How it happens: Essentially the same as cable, except your signal comes from the heavens rather than up from the ground.

How it happens: Also known as streaming. You can get many of the same channels as cable (often for less money) and popular on-demand services such as Netflix. You’ll need a smart TV or an add-on streaming device. And accessing your shows will seem more complicated, at least until you get used to it.

For internet TV, you need a smart TV, a DVD or Blu-ray player with streaming capabilities, or a streaming device that plugs into your TV and makes it smart. Such devices come in two forms — boxes or lower-cost sticks — with the boxes generally offering higher computing power and functionality. Popular brands of streaming devices:

Apple TV: Integrates with content on iTunes or iCloud. Plus, the device can sync with Apple computers and mobile devices.

Roku: The Switzerland of devices. Because it’s not tied to a content provider, it offers a broad selection of channels.

Google Chromecast: You need to sync the device with a phone, tablet or computer and do your content searches there rather than on the TV screen. Doesn’t work with Amazon Prime Video apps.

How it happens: Yes, free TV still exists. And sleek, digital antennas can deliver a clear picture (no more fumbling with rabbit ears and tinfoil).

She was paying $100 per month for hundreds of channels, yet she regularly watched only two. With some online research, she discovered a community of people who use — gasp — TV antennas. “I was shocked that you didn’t have to have cable to get channels,” she says. It’s true; your local TV stations never stopped transmitting signals for anyone to grab, gratis.

Today the cable-cutting trend has revived the antenna industry. The new designs aren’t like the rabbit ears you may remember from your childhood (though if you still have a 1960s aerial on your roof, that will work, too). Daniel bought a thin 13- by-12-inch antenna for about $50. She stuck it on her wall, plugged it into her TV and connected it with her DVR. Daniel had been paying more than $200 a month for cable plus internet. Her total bill for Netflix and internet service now? $73 a month.

First, find the stations available in your area at the Federal Communications Commission’s website. Then get an antenna powerful enough for your needs. Some manufacturers sell streaming-antenna combo devices to better integrate over-the-air channels with internet services.

Keep your cable service until you’ve experimented, suggests Brian Shim of DisableMyCable.com. “There’s so much fear about breaking something,” he says. “But with most modern TVs, you can just unplug your cable from your TV and plug in an antenna to see if it will work.”

Sound bars, which typically cost $100 to $1,000, are horizontal units that house multiple speakers and sit just above or below the TV; they can be mounted on the wall, too. Some models create a surround-sound effect. For aging ears, look for a model with features that specifically make dialogue easier to understand.

You could also try a simple DIY solution: In your TV’s settings, lower the bass and boost the treble. Voices are typically found in higher frequencies.