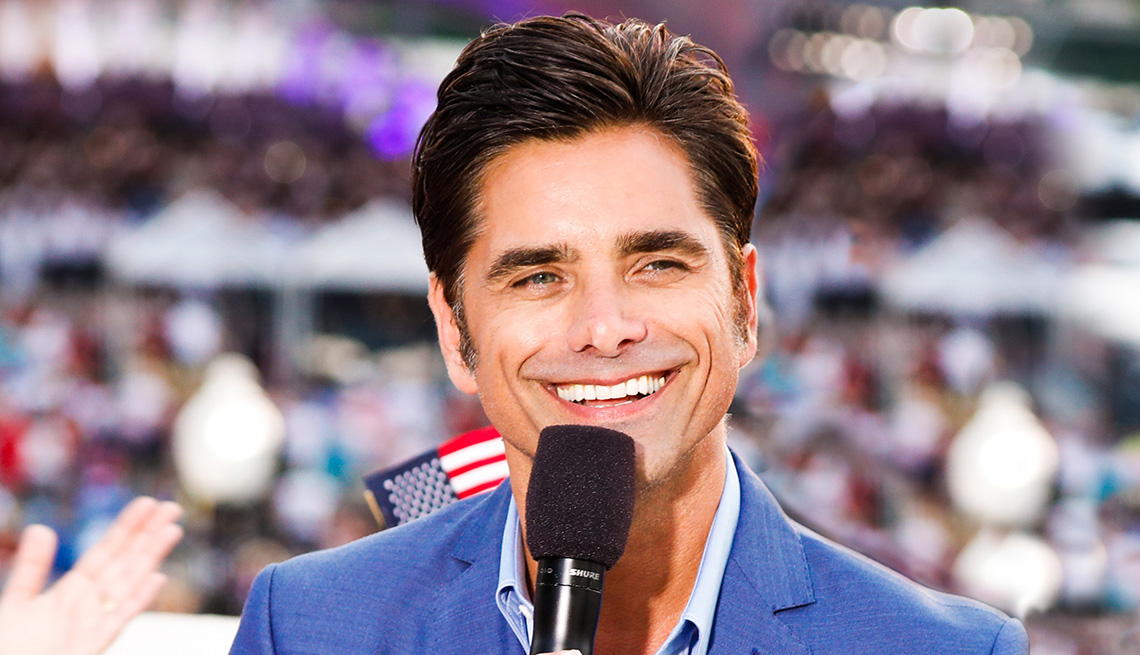 John Stamos returns this year to host “A Capitol Fourth” on PBS, airing at 8 p.m. ET on July 4.

Fuller House star John Stamos has played with the Beach Boys for longer than some of the original Beach Boys did — on and off since 1985 — so when he hosts PBS' 38th annual A Capitol Fourth concert on the west lawn of the U.S. Capitol in Washington, D.C., on July 4, he’ll know his parts.

“It’s a gigantic celebration, with poignant moments throughout, celebrating our veterans,” Stamos says. “Jimmy Buffett has never performed with the Beach Boys, and he’s going to sing ‘Kokomo’ with us.” Stamos’ own favorite song is “God Only Knows,” but this will be performed on video by the late original singer, Carl Wilson. “Plus, you have the Temptations, Pentatonix, CeCe Winans, Joshua Bell, Lauren Alaina, Luke Combs, Chita Rivera.” Other performers include Renée Fleming and The Voice finalist Kyla Jade.

“It’s an anxiety-riddled time out there,” Stamos adds, “but that’s why these shows are great. Let’s get together and celebrate what it means to be an American. The bottom line is, just be nice to each other. Last year, there were Republicans, Democrats, and it seemed like everybody left the politics outside and came and laughed and sang and danced — and that’s what we need.”

America is turning toward popular culture for healing in trying times. “The Beach Boys’ music has an optimistic vibe, a hopefulness,” Stamos says. “It’s like Fuller House [the Netflix reboot of Stamos’ 1987-95 show Full House]; it’s comfort food. It makes people feel safe, and brings them back to a simpler time. It’s scary out there, and what calms you? Music, old music for me, and TV shows that make you feel safe. I mean, when the curtain came up on Fuller House — before the cast came on — the audience gave the set a 10-minute standing ovation.” 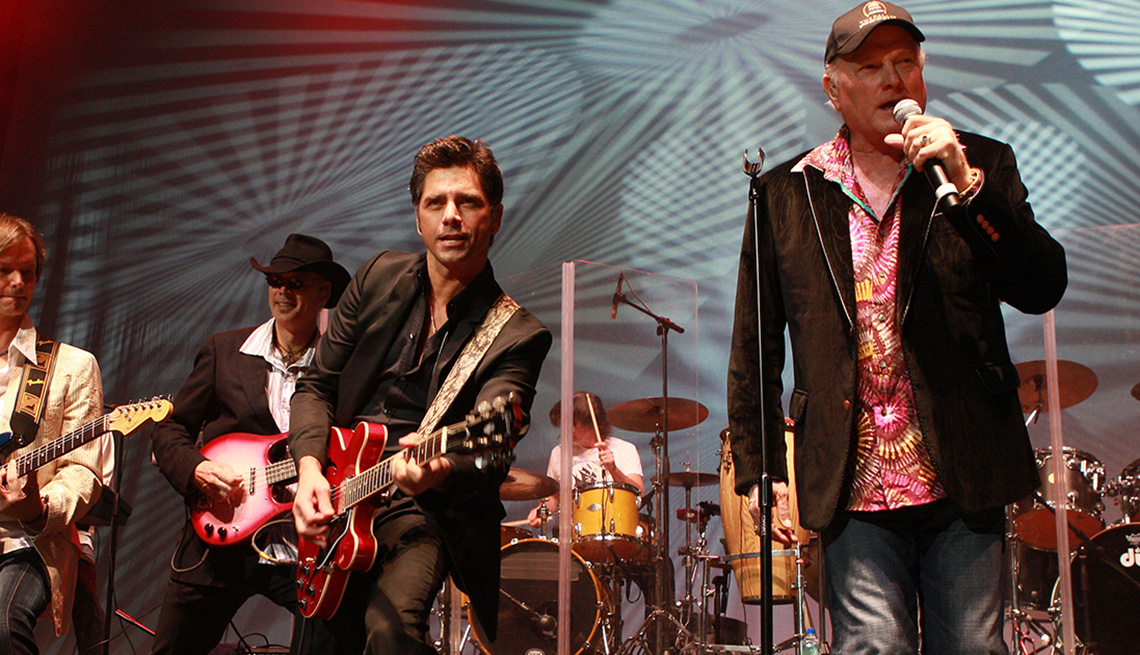 John Stamos and the Beach Boys perform at the Seminole Hard Rock Hotel and Casino as part of the 2011 New Year’s lineup.

After 57 years, the Beach Boys still have a youth-ifying effect: When they played the Hollywood Bowl in 2012, Mike Love told the crowd, “It’s as if it were 1965 again!” Several members of the audience, which included youngsters but skewed to folks who remember 1965, literally cast their canes aside and danced throughout the three-hour concert.

Stamos notes that aging is not as bad as it’s cracked up to be in Hollywood. “It used to be you could lie about your age, but now every time you see your name, it’s ‘John Stamos, 54.’ I was fighting getting older. I was going into adulthood kicking and screaming. I wish I could tell the younger me, ‘Just relax, it’s going to be OK.’ But I think by letting go, I’ve been prospering more.” Stamos has two big roles coming up: as a pothead psychiatrist in hot producer Greg Berlanti’s You and a loosely autobiographical show about his professional start on a soap opera. “It’s like Boogie Nights — an 18-year-old thrown into this world where crazier stuff’s happening in people’s real life than in the soap opera.” 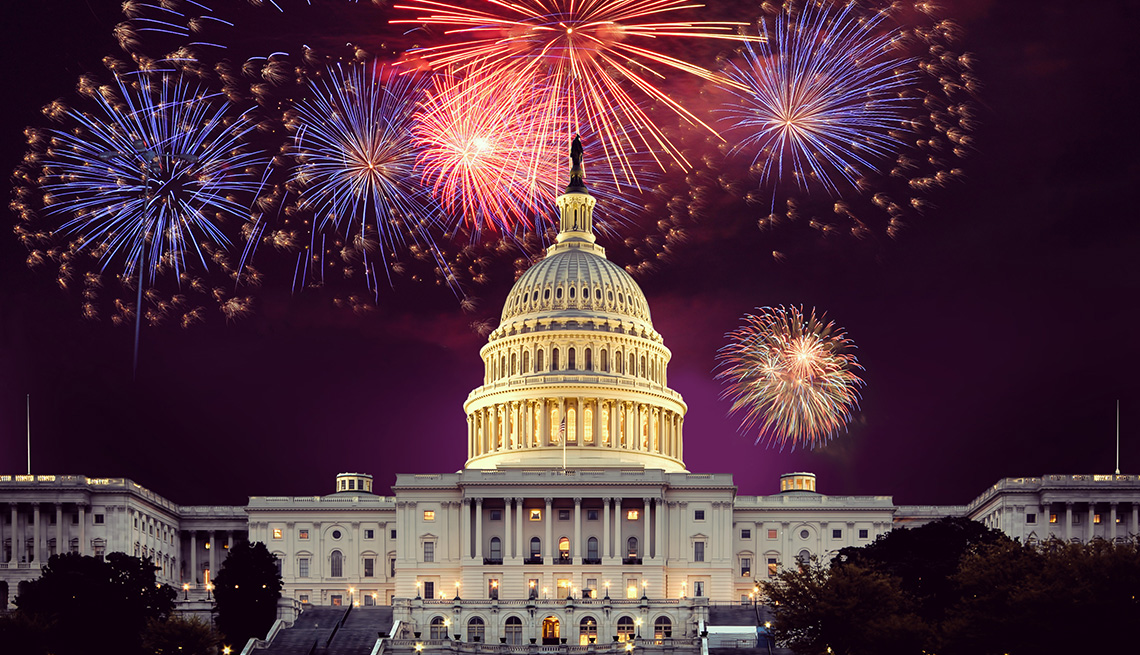 “A Capitol Fourth” is one of the biggest Fourth of July fireworks display in the U.S.

Stamos predicts that you’ll be very OK if you show up for the fun, tributes, fireworks and tunes at A Capitol Fourth, where the Beach Boys will receive the National Artistic Achievement Award (previously won by Gloria Estefan and John Williams) and Chita Rivera, 85, who looks remarkably as she did when she originated the role of Anita in West Side Story on Broadway in 1957, will perform a 100th anniversary tribute to Leonard Bernstein. “It’s heart music,” Stamos says.