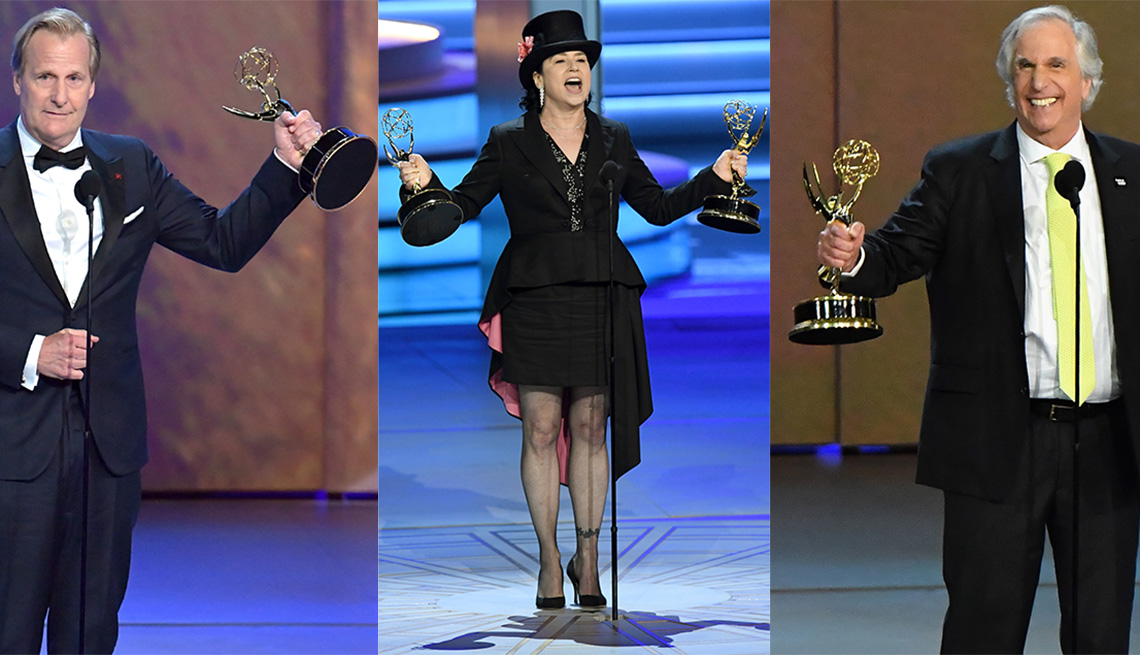 From left to right: Jeff Daniels, Amy Sherman-Palladino and Henry Winkler were the big winners among the over-50 set at the 2018 Emmy Awards.

Just two actors over 50 took trophys home at the 2018 Emmy Awards on Sept. 17 — one, Henry Winkler, 72, who waited 43 years for his first Emmy, for Barry; the other, Jeff Daniels, 63, who won his second Emmy in five years, for Godless. Both had fun with slightly cheeky acceptance speeches, which got more laughs than the show's opening monologue by Saturday Night Live's Kate McKinnon and Kenan Thompson.

Winkler won best supporting actor in a comedy series for playing Gene Cousineau, a high-strung Hollywood acting teacher who doesn't get that his untrained but promising new student Barry (Bill Hader) is actually a hit man. It's a marvelously funny, rather dark comedy available on HBO (and free on HBO.com) and Winkler is already at work on the second season (which, he told People, is “so dark that I needed to bring a flashlight to rehearsals").

Winkler’s acceptance speech was a hit of the evening. “I wrote this [speech] 43 years ago!” he joked. His first Emmy nomination was in 1976 for playing the Fonz on Happy Days, and he’s had six nominations with zero wins until now. “If you stay at the table long enough the chips come to you, and tonight I got to clear the table,” said Winkler, adding, “Jed, Zoe, and Max, you can go to bed now, Daddy won!” That was a gag too, since his kids are ages 33 to 46. After the show Winkler phoned his son Max, currently directing his third movie, to thank him for filming his audition for Barry. 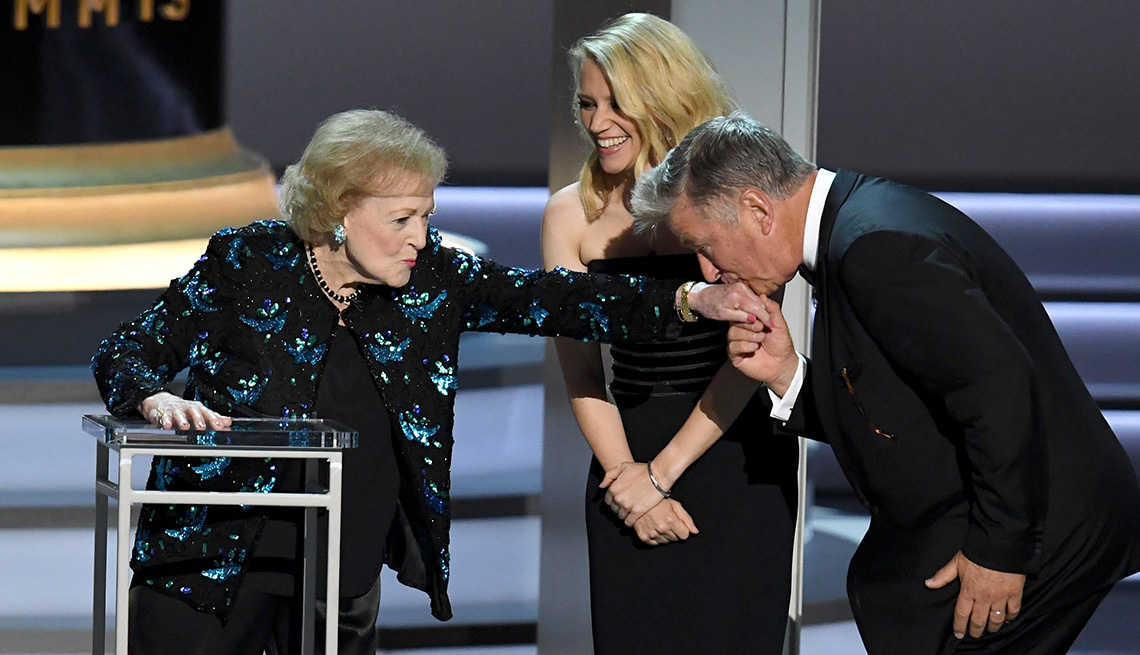 Daniels, who won best supporting actor in a limited series for playing Frank Griffin, a Wild West outlaw taking refuge in a town ruled by women, in the drama Godless, was just as charming, seemingly not disappointed that on his other 2018 nomination — for lead actor in Hulu’s topnotch 9/11 docudrama The Looming Tower — he lost to Darren Criss, 31, for his work on The Assassination of Gianni Versace: American Crime Story. Godless, rated one of the season's 10 best shows by the Washington Post and Vanity Fair, streams anytime on Netflix, which industry insiders say, hopes to bring the show back for a second season.

"Little tip for you young actors,” Daniels said. “When they call and say, ‘Can you ride a horse?’, don't lie. You will find on day one, you're in the Kentucky Derby.” Daniels thanked his horse, Apollo, though he also joked: “He was Jeff Bridges’ horse on True Grit, and I felt he was making unfair comparisons. Three times he threw me off the horse. Three times! The third and last time, I broke my wrist.” But Daniels found the strength to hoist his Emmy in triumph.

The over-50 talent behind the camera had a good night, especially Amy Sherman-Palladino, 52, who became the first woman in the Emmys’ 70-year history to win both writing and directing awards, for The Marvelous Mrs. Maisel, an original, titanically entertaining show about a 1950s female standup comic. The show also won for best comedy series, lead comic actress, casting, editing and music supervision, and streams anytime on Amazon, which released the trailer for Season 2 in August. 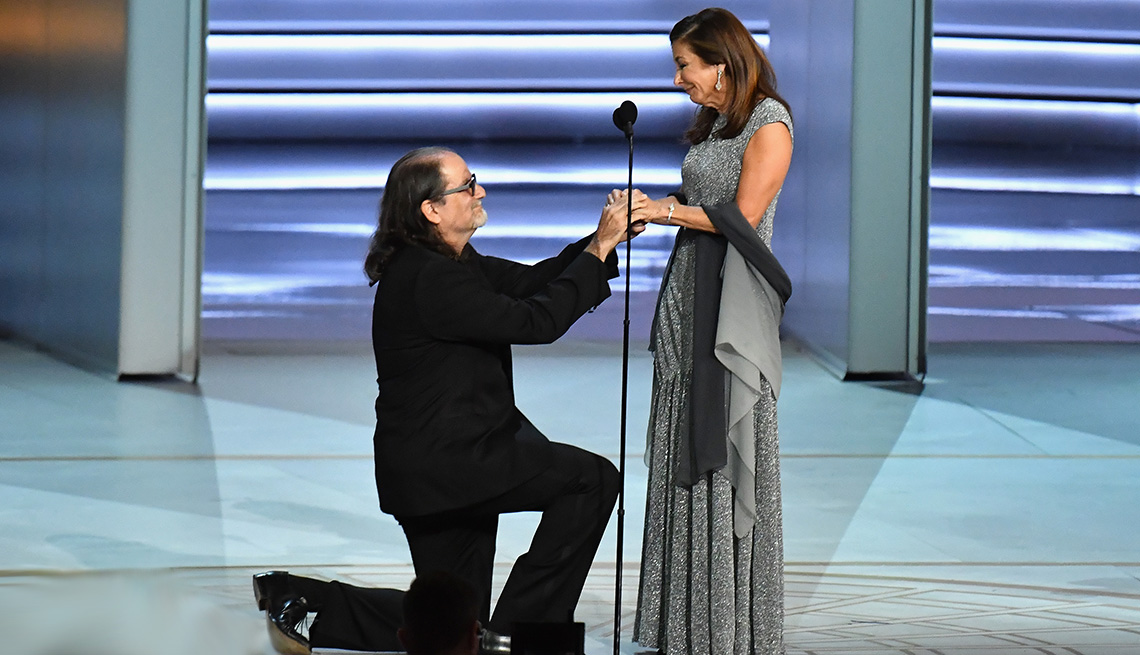 Director Glenn Weiss took his Emmy acceptance speech as a chance to propose to his girlfriend, Jan Svendsen.

Weiss used his speech for the most dramatic event of the Emmy show: he proposed marriage to his girlfriend of many years Jan Svendsen, who walked onstage and let Weiss slip on to her finger the same ring his father gave his mother 67 years ago). It’s not surprising Weiss knows how to jazz up an awards show with an unexpected surprise — he’s gotten Emmys for directing the Oscars and Tony Awards (where Svendsen used to work as director of marketing).

The audience also leapt to its feet to give a standing ovation to Betty White, 96, honored for being a TV star ever since TV was invented in the 1940s. “Little did I dream then that I would be here,” said White, “and it's incredible that I'm still in this business and that you are still putting up with me.” White seized the chance to let presenter Alec Baldwin kiss her hand, saying with her signature flirty flair, “You think I'm gonna miss a chance when I get it?"