It looks like Buffy is on her way to being named MVP this season. The little white bichon frise with floppy ears trots across a small soundstage that's decorated to look like a miniature football stadium, to the far side of the faux field (the end zone).

“And that’s a field goal for Team Paws!” says Dan Schachner, the “ruffaree,” as they call him here. Dressed in a black-and-white striped ref’s shirt, Schachner picks up the flummoxed-looking pooch and turns toward the camera. “Great job, Buffy!” he says.

I’m at a New York City TV studio for the taping of Animal Planet’s first-ever Dog Bowl, featuring adult dogs — ages 2 to 15 — including 7-year-old Buffy, from shelters around the country. The countless hours of footage will later be edited to (very) loosely resemble a football game between the two teams, Paws and Tails, and air as a one-hour special on Saturday, Feb. 3, at 8 p.m. ET, the night before Super Bowl LII.

The point of both shows is to encourage viewers to adopt animals from their local shelters — not just the stars on the field, some of whom will have already been adopted by the time the show airs. (You’ll be able to find information on the adoptable ones on the Animal Planet site.)

It’s pretty easy for the little guys, who all find their "fur-ever" homes faster than you can say “Awwwww!”

The spin-off aims to highlight the adoption needs of adult dogs, who are just as wonderful but often overlooked for the pups.

“It’s so unfair,” says Dog Bowl host Jill Rappaport, a former correspondent for NBC's Today show and passionate animal advocate. “If people understood the advantages of an older pet, I think we wouldn’t have any in the shelters right now.”

Grownup dogs are usually better behaved than puppies, she notes, which can make them ideal companions for older people. “You don’t have to worry about them eating the sofa and running you ragged,” says Rappaport, who has four beloved senior canines at home, including one that's 16 years old. “Older animals have been there, done that. They’re a joy.”

And by all accounts, today’s furry football players are definitely a lot more chill than the 91 puppies who were filmed the day before — the youngsters were absolutely adorable, of course, but about as calm as caffeinated kindergarteners.

The 50 adults are divided into six groups by size, so the smaller dogs don’t get overwhelmed by, say, one of the four burly English bulldogs now waiting in the wings.

The first order of business is filming the starting lineup. The little ones, including the valiant Buffy, are sent out one by one through a little tunnel onto the field. A trainer at the other end of the stadium crouches while shaking a bag of treats, hoping the dogs will head toward the end zone. Dry ice adds some drama to the action (or nonaction, in the case of one fluffy white cutie-pie who settles down on the field as though ready for a nap).

Later, to film scenes for the game itself, a series of two or three dogs play together with the various balls and squeak toys scattered across the field. The 30 or 40 producers, technicians and dog handlers in the cavernous studio stand silent or whisper so that the dogs don’t get frightened. When one player, an annoyed-looking shih tzu named Benjamin Button, begins barking, a handler quickly scoops him up off the stage for a snuggle break. 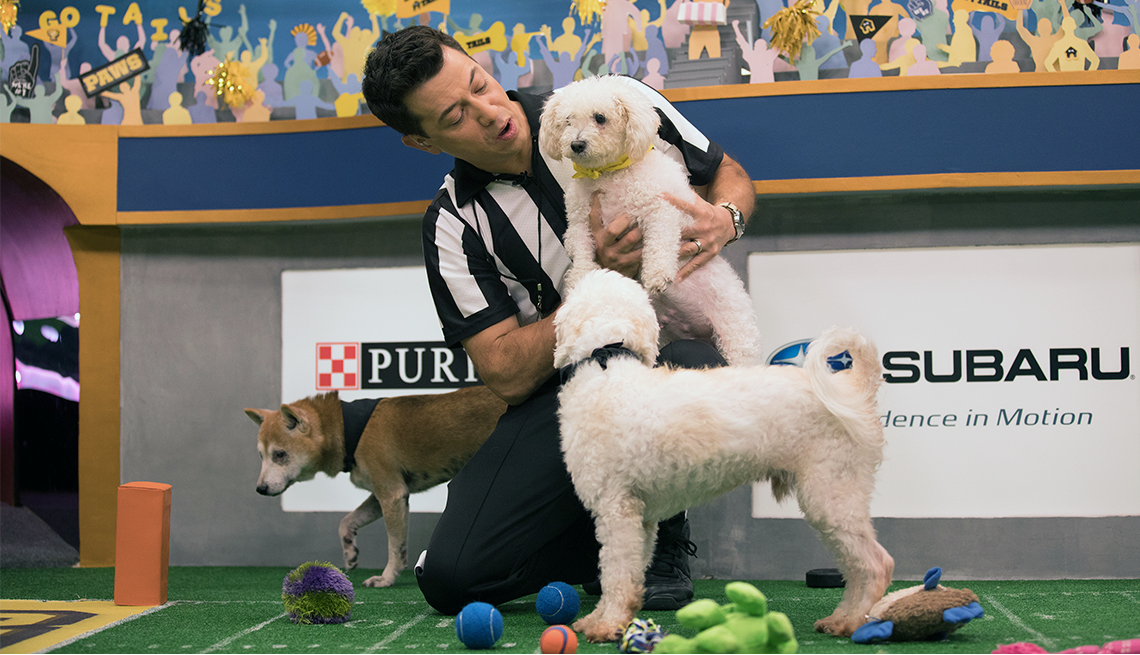 Dan Schachner, the referee for the first-ever "Dog Bowl," has a "ruff" job.

"You can see it’s really like a dog playgroup,” says Schachner, who’s also been the Puppy Bowl ruffaree since 2010. “It’s just about motivating them, giving space to explore. And every now and then, a dog will take a chew toy to the end zone.” Later, the editors will add music, crowd noise and play-by-play announcements.

“We never do anything overly fake,” Schachner adds, earnestly. “We never dip the chew toys in hot dog juice or anything like that.”

Similar to NFL athletes, several of the pooch players have their own poignant backstories. A shaggy mini-poodle, Teddy, was rescued from the floodwaters during Houston’s hurricane the month before today's filming. (Rescuers were unable to locate his previous home.) “He loves to play,” says his foster mom, Ann Brookes, of Westbrook, Conn. “He just needs some love and a little more food.”

Buffy, the bichon frise (and likely MVP), had been found wandering around Newark, N.J., before she was taken to a shelter. Soon after, she came down with pneumonia and also had to have surgery to remove bladder stones and tumors. Now recovered, she’s wagging her tail — having scored a few Tom Brady-style touchdowns earlier — and she's ready for her fur-ever home.

The final score? You’ll need to watch and see. But with network reps confident that every dog will find a home, they should all be considered winners.