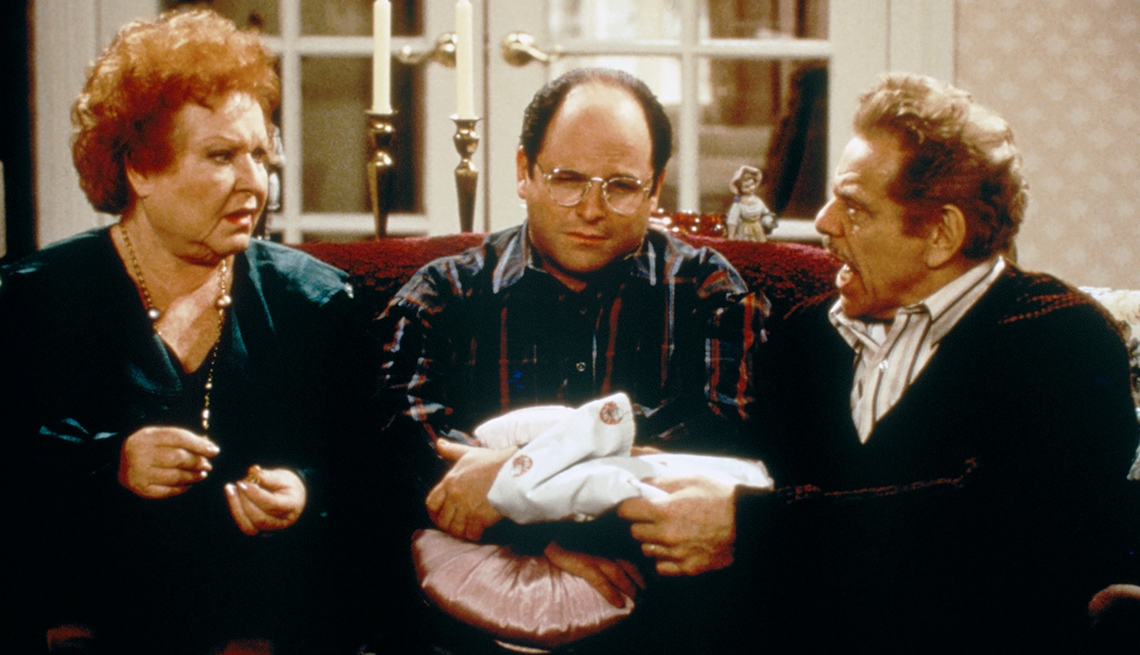 Festivus, a fake holiday introduced on 'Seinfeld' 20 years ago, has become something of a real-life phenomenon. Here, Festivus creator Frank Costanza (left, played by Jerry Stiller) airs a few grievances.

You better watch out, you better not cry, you better not pout … actually, feel free to pout all you want. In fact, air your problems with those closest to you out in the open — vociferously. Also, maybe prepare to lift a few barbells.

That’s right: Festivus is here again! And it’s a milestone year for the fake-now-sort-of-real holiday that was first introduced 20 years ago tonight on a Seinfeld episode titled “The Strike.” The episode, which aired Dec. 18, 1997, on NBC during the final season of the touchstone sitcom about nothing, didn’t even feature Festivus as its main plot — its “A” story centered on Jerry Seinfeld’s neighbor Kramer ending his 12-year-strike against his employer, H&H Bagels.

Upon upon hearing of Festivus, which Frank Costanza created and celebrates each Dec. 23, much to the dismay of his son, George, Kramer requests the day off from work to partake. When denied, he promptly goes on strike again to attend Frank’s made-up holiday gathering — a “Festivus for the rest of us!” as Frank joyfully, and somehow crankily, announces.

Kramer’s strike was quickly forgotten even by the show’s diehard fans once the sitcom ended its nine-year run in May 1998. But Festivus has taken on a life of its own, with people annually adopting and enacting its odd rituals, including:

•    Gathering around the “Festivus pole,” a plain, undecorated aluminum pole;
•    Carrying out the “Airing of the Grievances,” during which each person publicly informs friends and loved ones in attendance exactly how they were disappointed by each of them over the preceding year;
•    Eating Festivus dinner, which is pretty much just a normal dinner;
•    Ending the celebration with “Feats of Strength” in which guests are encouraged to demonstrate their power, toughness and vigor. The Feats of Strength are not finished until the head of household has been pinned by an opponent in a wrestling match.

The strange proceedings befit an occasion that, according to the episode, was created when Frank experienced an epiphany while engaged in a holiday season fistfight with a fellow toy store customer. They both had their eyes on the final doll in the store, and fisticuffs ensued. “As I rained blows upon him, I realized there had to be another way,” Frank tells Kramer. Thus, Festivus.

In real life, Festivus was reportedly the brainchild of the father of Dan O’Keefe, the Seinfeld writer who penned the episode. The elder O’Keefe apparently made up Festivus stories and traditions and shared them with his three sons as they grew up. O’Keefe has said that he randomly came up with the date of Dec. 23 for Festivus for the episode. His dad, he recalled, would have his family celebrate the occasion “whenever my dad felt like it.”

The traditions of Festivus have endured throughout the two decades that have passed — Festivus poles are for sale online and have even been erected at state capitols. There are Festivus T-shirts and ugly Festivus sweaters for purchase. Ben and Jerry’s once created a flavor in honor of the occasion. Minor league baseball teams have staged Festivus promotional nights. The holiday has spawned several books and websites. And the fake holiday shows no sign of slowing down; every Dec. 23, social media is a-twinkle with aired grievances — even more than on a normal day.

“It’s a pretty good holiday when you think about it,” O’Keefe’s fellow former Seinfeld writer Marc Schaffer once told an interviewer. “It’s the perfect antidote to Christmas when you’re supposed to pretend to be nice to everybody, and give them presents. Why not have its evil twin where you can sit around a pole and tell everyone what you don’t like about them?”