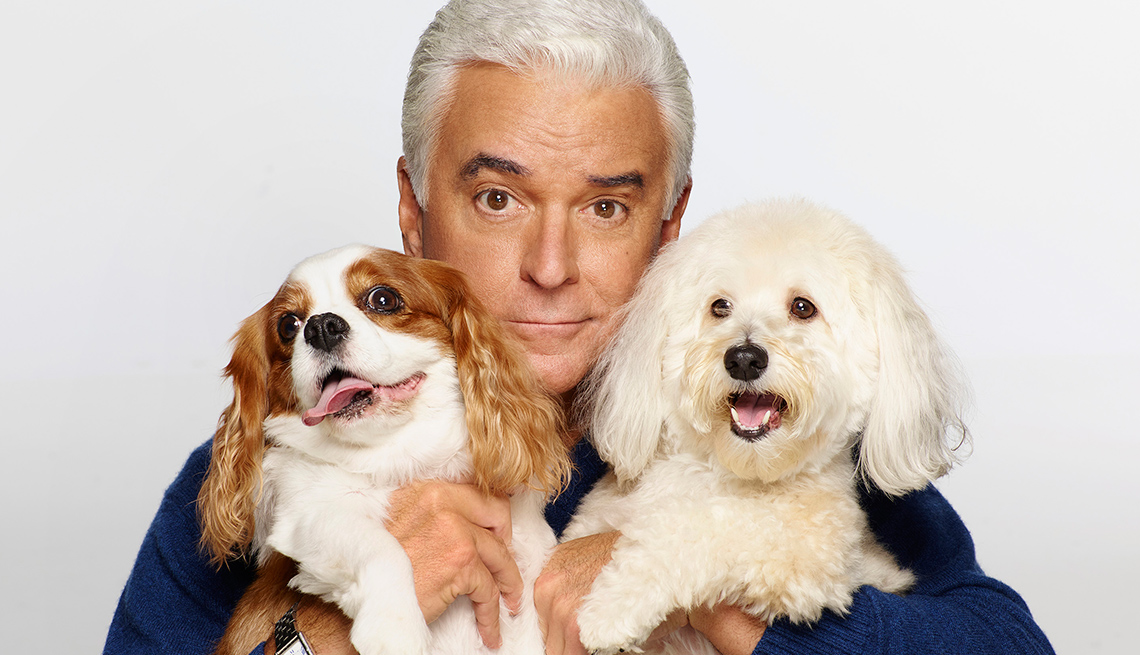 Dubbed one of People magazine's Sexiest Men Alive in 2005, John O'Hurley has hosted "The National Dog Show" for more than a decade.

The National Dog Show, airing on Thanksgiving Day on NBC from noon to 2 p.m. ET, is officially a Turkey Day tradition in its 16th year — one that’s not complete without the sonorous voice and jovial, if sometimes deadpan, insights of its longtime host, actor John O’Hurley.

O’Hurley likes to call himself the “everyman” of the canine competition. But if the stage and screen star — you may know from his days as J. Peterman on Seinfeld — doesn’t have the strong opinions of cohost David Frei on the gait of a bullmastiff or the coat of a white bull terrier, this is not his first rodeo — er, you know — either. Ask him his favorite show-dog breed, and he’s quick to wax poetic on the merits of the Irish setter. “With their perfect posture and beautiful auburn coat allowed to go long, they saunter into the ring with their fast gait and look like the redhead who just walked into the cocktail party.”

And sure, he’s never quite gotten used to how trainers store liver treats in their mouths before feeding them to their dogs, but he’s not judging. (“If you dangle lobster claw in front of me, I will hold any position you ask,” says O'Hurley, who now co-owns the J. Peterman catalog.) What really matters is that when it comes to sussing out the all-important best-in-show title, he’s not nearly as confused as the rest of us are. First of all, a dog is judged on how well it reflects the standard for its particular breed, not “against each other or on the cute factor.” What’s more, a pup that scores well earlier on the dog show circuit can be favored to win this major competition. Not that upsets don’t sometimes happen. Or as O’Hurley sums it up: “We do find those that lead the pack from the start ... but ... every dog has its day.” 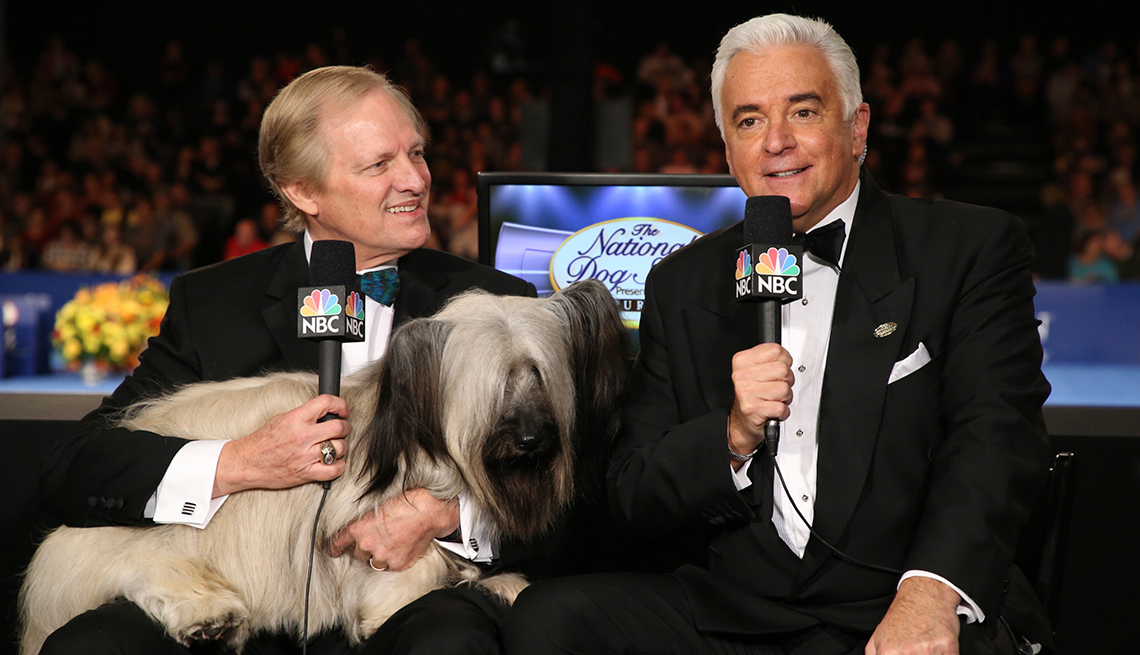 During the eight hours of the benched show (requiring all handlers and canines to remain on the premises and be available for public viewing and petting), it’s not all predictable tail raises and muzzle lifts. If the handler’s motto might be “Never lose the lead of your dogs,” well, stuff happens, O’Hurley says. Stuff like one dog’s very early — and very misguided — solo victory lap. (“This dog just said, ‘This is how I should be shown,’ and took off,” O’Hurley recalls). Another notable break with protocol occurred when a Great Dane halted right in front of the announcer’s table, “looked straight at me, squats, and leaves behind something about the size of Mount Vesuvius.” Even more surprising? The hazmat-suited cleanup crew that swooped in faster than a ball boy at Wimbledon.

Of course, none of this is funny to trainers, the wind beneath the wings of the Brussels griffon or the Belgian sheepdog — also, the feet and lower legs filmed jogging into the ring with them — those for whom “breeding rights and bragging rights” can depend on whether a member of the toy or herding group wins the coveted yearly title. (Yes, O’Hurley concedes, these men and women do sometimes look like the hound or the poodle they’re devoted to.)

At the end of the day, what O’Hurley loves as much as the buildup to the big announcement is the energy of having 2,000 dogs (and this year, 191 breeds) in one building, and how “these dogs never take themselves too seriously, but are just happy living moment to moment.” 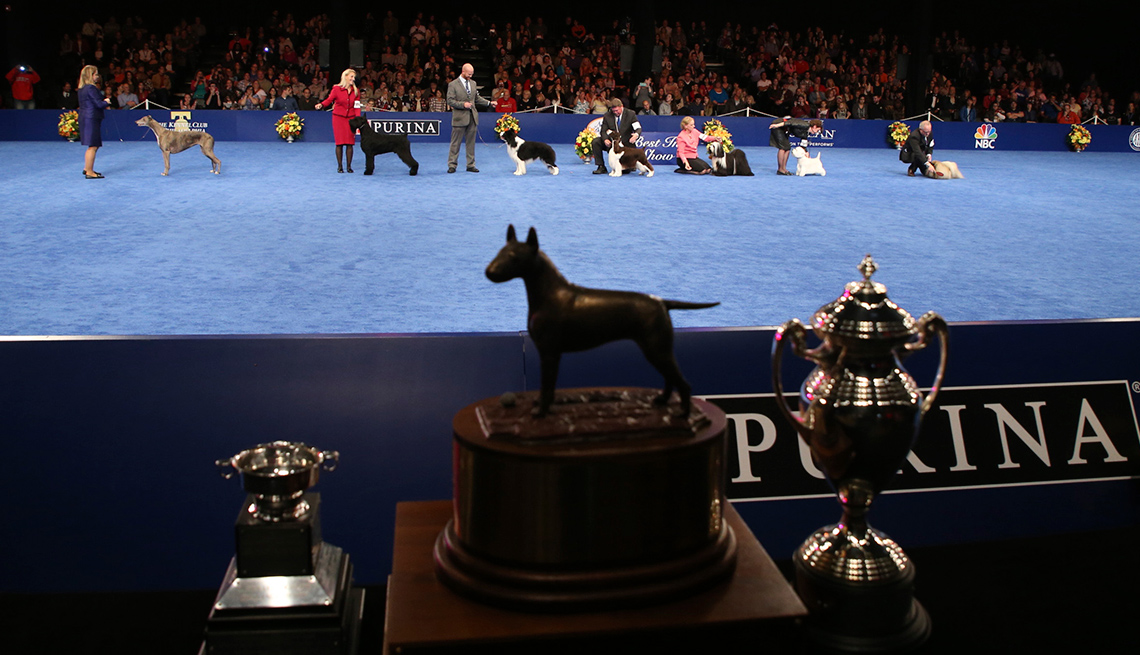 “I’ve never seen one dog upset that they lose, unlike, say, Little League parents,” notes O’Hurley, the proud dad to Will, age 10, and proud owner of a Cavalier King Charles spaniel, Sadie May, and a Havanese, Lucie, whom O’Hurley brought home after helping to open a shelter for the St. Louis Humane Society. “I say she’s a rescue dog, but that makes it sound like I swooped in at night under the cover of gunfire,” he quips.

What really happened betrays how a true dog lover’s heart beats south of his silver-tipped tongue. “They gave me this little puppy to hold at the press conference, and as the event went on, the little puppy went deeper and deeper inside my jacket. Just before the end of the conference, I peeked in and said, ‘Is anyone interested in going to Beverly Hills?’ And the dog popped its head out.” O’Hurley called his wife and told her he needed to come home with the puppy. “The instinct,” he explains, “was too strong not to.”

So you think you know your dog breeds? Take our quiz!