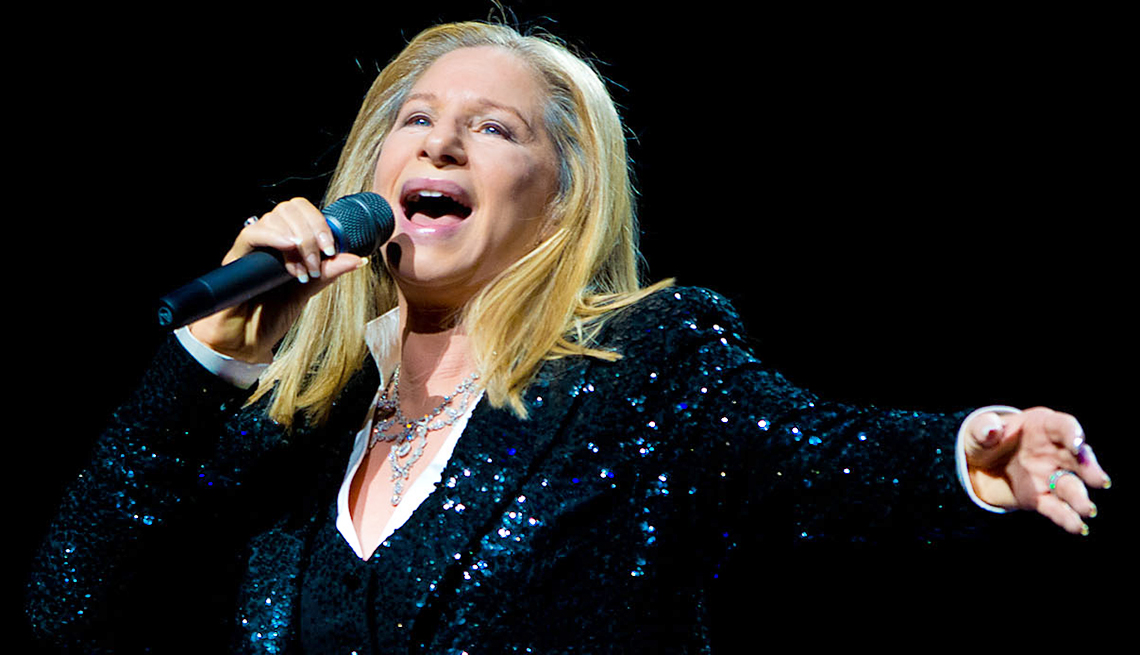 Barbra Streisand is the only singer with chart-topper albums six decades in a row.

Not a 75-year-old star alive has a voice as nearly intact as Barbra Streisand, maybe because she took a 27-year break from major performances, or because she didn't often scream over rock bands like many rivals. Or maybe her three-octave gift is like magnesium, whose flame may subside but never ceases to be incandescent. She's on a huge roll now, with a forthcoming memoir, a $53 million tour, and this film of the concert, co-directed by Streisand herself, and premiering today on Netflix.

It's a bit like a documentary: We tag along on her comfy plane, backstage before the crowds come, and at the post-show celebration; onstage, there are videos from her illustrious past, including an outtake from A Star Is Born in which she shyly plays for Kris Kristofferson a new song with no words yet — the Oscar and Grammy-winning "Evergreen." (Now that Mike Nichols is dead, Streisand is the only human to win a PEGOT: a Peabody, Emmy, Grammy, Oscar and Tony Award.) She's quite cozy and chatty onstage, without a trace of the stage fright that kept her offstage  for so many years. Did you know her agent since she was 19 negotiated a virtually unprecedented record deal that gave her total control? And that otherwise, her first album would have been entitled by the record company Sweet and Saucy Streisand? She cracks, "Sounds like a barbecue sauce!" She called it The Barbra Streisand Album instead.

I'm not sure how much better Barbra: The Music...The Mem'ries...The Magic!  is as a title, but at least it's her idea. And the show is sure to please anyone who was ever a fan. The loose idea for the 24-tune evening is to highlight her ten No. 1 albums. She's the only singer with chart-topper albums six decades in a row — though during the tour she naturally racked up an eleventh No. 1 album. She's mostly solo, except for a small band, a few backup singers, and Jamie Foxx. Foxx razzes her by doing a perfect impression of a duet between Sammy Davis, Jr. and Streisand, then sings “Climb Ev’ry Mountain” with her, superlatively. I hate that song, but liked this rendition. She also does a duet with the large video image of Anthony Newley, his 1964 tune “Who Can I Turn To (When Nobody Needs Me)” from The Roar of the Greasepaint, The Smell of the Crowd. They're like buttah together.

Even songs I never wanted to hear again are rather addictive here, like "You Don't Bring Me Flowers Anymore" and "Papa, Can You Hear Me?" from Yentl. Her voice doesn't soar as enormously as it did, but it's still big enough to stomp most pop singers a third her age, and her vibrato only gets more affecting with age. It has the poignance of Paul McCartney's heartbreaking cover of "More I Cannot Wish You" with the merest hint of McCartney's frailty. Really, she is one exquisitely age-proof specimen, and one who could've frankly used a touch of imperfection back when to mitigate her shininess and overcontrolled delivery. There's a little catch in her throat that wasn't there before and is entirely welcome, like the little rasp Nancy Wilson got from a head-cold the day she recorded "These Dreams."

Critics gotta be critical, and I'm not crazy about the entire song selection. I mean, "Jingle Bells?" Also, I don't want to hear about her political opinions, and had to, and I really hate Carole King's dull, preachy, unmelodic "Being at War With Each Other," even when done by Streisand's superior instrument. She should fire her writer (herself) for lines like, ["I recorded this] when a tweet was what a bird did and the only people that had cell numbers were in jail." The scenes of her joshing around with Melissa McCarthy and Hugh Jackman add little.

That's about all I can think of to go negative about, and the schmaltzier tunes I don't treasure are likely loved more by most viewers. Streisand was always amazing, but to be this amazing at 75 requires some stronger adjective. I'll go with "Gawjuss!"