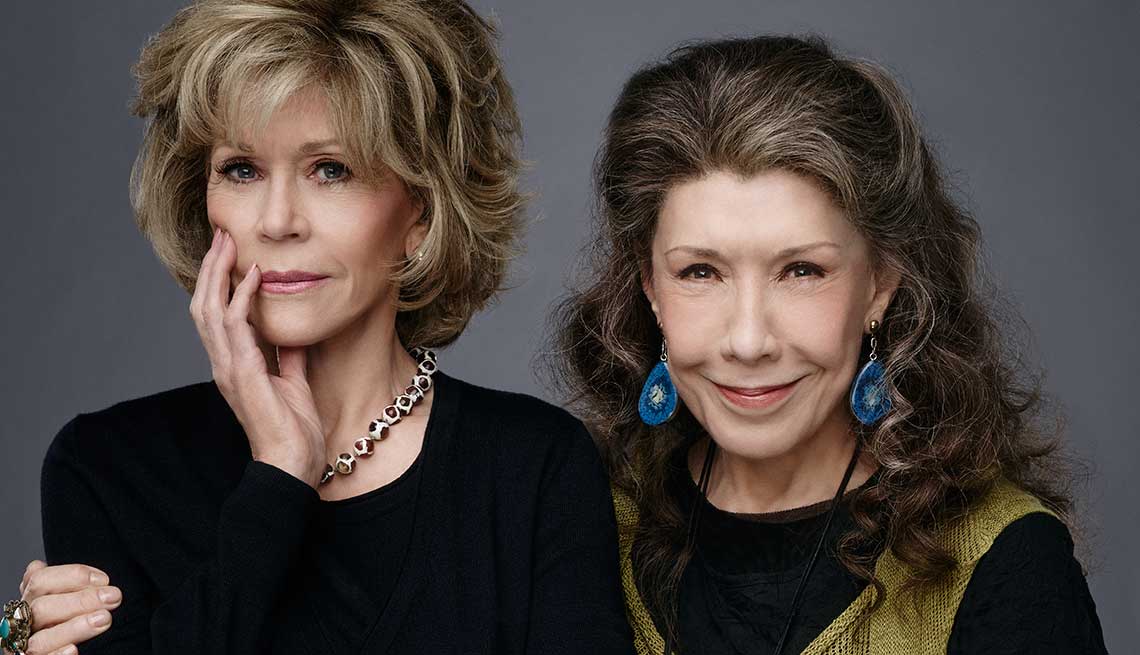 What happens when your husband comes out to you -- and reveals he’s in love with your frenemy’s husband? Lily Tomlin and Jane Fonda will find out in the new Netflix comedy, Grace and Frankie

Jane Fonda: My knees are different now. I mean I actually have different knees — and a fake hip. When Lily and I last worked together, on 9 to 5 in 1980, I would teach a class at the Workout [Fonda's Beverly Hills aerobics studio] at 5 in the morning before going to the set. I'm 77. My body couldn't do that now. But I have a better brain, a better outlook on life and a greater sense of well-being.

Lily Tomlin: I've changed quite a lot but, OK, not completely. I was a perfectionist then. I thought I looked too thin. And I still worry about photographs. Even now I'll say to the person behind the camera: "You sure you've got the shot?"

* After her divorce from Ted Turner in 2001, she became a born-again Christian.

* Her books, workout videos and cassettes have sold more than 17 million copies.

Jane: I hope with our new series, Grace and Frankie, we dispel the traditional view of aging: You're born, you peak at midlife, then you decline into age. That's an arc. But for most people, life is more of an upward evolution. Research suggests that older people feel happier and less hostile, and that life gets easier.

Lily: In my 30s, I started doing a character named Sister Boogie Woman [a blues-singing preacher], who was 77. As I got closer to that age, I thought, "Gee, I never thought this day would come." But you know what? I'm 75, and it's not bad.

Lily: Everything I've experienced has gone into my material. My comedy is part of my life. I'll never say, "Ladies and gentlemen, this is my last performance." Maybe my last for that day, sure, but not my last "last."

Jane: Retirement? No. It's a foreign concept to me. I might not be able to continue acting at some point, but then I can write or produce. There are any number of things I could do. I get so much from work, and I continually try to improve. One of the good things about getting older is that when you come to a standstill, you say to yourself either "I'll stay here" or "I have to change something." I've needed to shake things up — and did.

Hail To The Chief

Lily: When I received the Kennedy Center Honor last year, it was nice; it was fun. I guess I'm supposed to say something like, "Oh, it was the ultimate moment of my career," but I didn't feel that way. It was just a happening, and I loved being part of it. Tom Hanks was sitting on one side of me, and Sting — clapping like a 3-year-old with his fingers spread — sat on the other side. I tried to change seats with Tom to see what the president was texting. The only thing I could see was, during [ballerina] Patricia McBride's presentation, the word "transcendent."

* In one of her first auditions, she impressed TV host Garry Moore by dancing shoeless with metal taps taped to her feet.

* Ernestine and Edith Ann from Laugh-In's third through sixth seasons are still her best-known characters.

* After a video went viral of director David O. Russell screaming at Tomlin on the set of I Heart Huckabees, she shrugged it off, saying, "It happens sometimes."

Jane: I'm not someone who dwells on regrets, but it was a terrible mistake sitting on the antiaircraft [gun in Vietnam]. It was wrong. I will say that the context is something people don't understand. There was no bombing at the time; there were no planes overhead; it was not an active gun. But it was still wrong.

To Have And To Hold

Lily: My partner, Jane Wagner, and I married kind of impulsively a year ago after being together 43 years. I needed a ring. I went into the jewelry box and found one made out of denim with a stone in it, and another little expandable ring with beads on it. We used them, but now they're back in the jewelry box. Relationships aren't always easy. Ours is still sweet, but it gets bumpy and hilly now and then, and that's just reality. I cannot fathom life without her.

Jane: I'm with a man who has Parkinson's, and that can be very hard. I'm energetic — I move fast, and he can't. But Richard [Perry, a former record producer] is a kind and wonderful man. It never occurred to me in 70 years that kindness was important in a relationship. Fascination, sex appeal, intelligence, yes. Why aren't we taught that kindness matters?

Jane: I get anxious. I worry that I'm not good enough. It's a bit less than it used to be, but I come from a long line of people who are depressed, so I need to work deeply on myself. Meditation helps a lot.

Lily: What did Pablo Casals say? In his 90s, he still gave the same answer when someone asked why he continued to practice cello every day. He said, "I'm beginning to notice some improvement." At this stage in my life, I understand that completely.

Jane: My grandkids, they're 16 and 12, and it just blows me away how involved and knowledgeable they are. They teach me so much. My first grandchild taught me you can have a second chance in a parenting role — and that listening is more important than talking at.

Lily: At some point, you're closer to the end of your life than the beginning, and that can be scary. When I was around 4 years old, I was visiting my grandmother when a little girl died. This was rural Kentucky, and they'd lay the body out in the house. We went over and saw the little girl in a coffin, and she looked like a big doll, with a fluffy dress and her hair in curls. Everyone was just oohing and aahing over her. Death didn't make sense to me then, and it doesn't make any more sense now.

Jane: I feel the opposite. The past few years, I've made a real point of cozying up to death and making it a friend. That's what I always do with things that frighten me. I read about death, and I think about myself dying and how I want it to be. It helps me to plan. If you know you want to have certain loved ones around you, then you have to live in a way that will have them there. And you don't want important things going unsaid before you die. Death is inevitable, so why not make peace with it? I'm not scared of it at all.