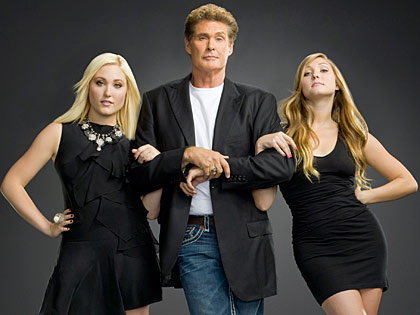 Former Baywatch star David Hasselhoff, 58, may be the most-watched TV star in the world, according to the Guinness World Records, but he's infamous for a 2007 home video made by daughter Taylor-Ann that shows him drunk and unsuccessfully trying to eat a cheeseburger.

That video went viral on the Internet and Hasselhoff, a recovering alcoholic, became an overnight joke. While the world laughed, the incident launched a time of re-evaluation and healing for Hasselhoff, Taylor-Ann, 20, and second daughter, Hayley, 18. Now father and daughters show how far they've come in The Hasselhoffs, a new reality show airing Sundays at 10 p.m. on A&E. The show highlights the family tackling real and hoped-for fame as the girls pursue their own careers in show business.

Hasselhoff talks with AARP about the series, the cheeseburger video and the never-ending challenges of fatherhood.

Q: What made you want to do The Hasselhoffs?

Q: Was there any apprehension about opening your lives to the public?

A: No. I thought this was a good way to let people know who we were. So much crap has been written about us, and so much stuff that has been true has been exploited ... this show will be all about our honesty with each other. It's not gonna be people fighting. It's gonna be about a normal family that happens to be in show business, and happens to be on television.

Q: Did your fame make being in front of cameras, and living lives in public, seem more natural to your daughters?

A: It did. They never knew me as a celebrity until we went to Germany and London and they saw the craziness. They see the enormity of the power of television, and they want to travel with me. But growing up, they just thought, "Wow, Dad's going to the beach again." They were just small kids hanging out at the beach. They knew when they said "rolling," they weren't supposed to talk, and when they said "cut," they could talk. It was just as natural as the day is long to them. They've grown up with it.

Q: What kind of transition was involved in shifting from just being a father and his daughters to also being co-workers?

A: Working with them was not a problem. The problem for me was getting up at 4:30 in the morning to do their makeup here in . It takes me 10 minutes to get ready to go to the moon. It takes them two hours to figure out what to wear. That was about the only challenge.

Q: How do you think parenting — sometimes in front of cameras — makes the challenges different from those you would face if not on television?

A: I don't think it's any different. I equate it with the everyday challenges of being a father. It's about having a safe environment and a safe place [for them] to be loved and cherished. I learned from my kids. They're the ones who said, "Hey, Dad, your behavior is scaring me. You leave us in this world, we don't know what to do." That was a big eye-opener for me. I think about that every day when I wanna go out and party a little bit, or have too much. I say, "What's more important to me?" That's one of the things people are responding to about this show — my being a single parent, kinda like Father Knows Best, but father doesn't know what he's doing at times. He's just trying to figure out how to get through the day. Sometimes you gotta make it up as you go along.

Q: Has the fact that you've had to deal with your alcoholism in public made it even more difficult than it might have been otherwise, or is there a benefit to that?