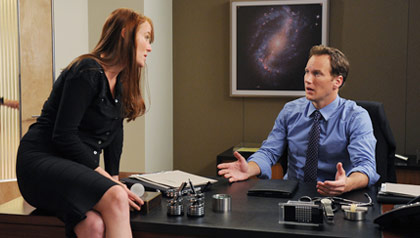 The 2011-2012 television season is already into its third week and it seems clear it will be remembered as the one in which producers used fantasy and nostalgia to take a weary public away from the stresses of economic and other bad news. With 40-plus new shows, and scores of others that returned with new plot twists and characters, it's helpful to have a guide to the grownup and the good. Here's ours:

CBS is out front in ratings, revenue and (this year, at least) Emmy nominations. It wants to maintain that position.

To that end, it has refreshed former blockbuster CSI by adding a most likable veteran, Ted Danson, as a lead character. It has Jamie Lee Curtis guest starring on the top rated scripted show on TV, NCIS, for a two-episode arc in November, reuniting with her Freaky Friday love, Mark Harmon. It moved The Good Wife to Sunday night (which may not turn out to be its best move.) And it has added three new dramas that could find an audience: Person of Interest, A Gifted Man and Unforgettable. A Gifted Man — starring Patrick Wilson — is the strongest. It also features the marvelous Margo Martindale, who won an Emmy last month and talked about how, at 60, she could appreciate it.

IT'S TOUGH BEING A GUY

ABC has a predilection for shows featuring strong women, e.g. Dana Delany in Body of Proof, and shows that center on how hard it is to be a man in today's world. The latter include Tim Allen's new Last Man Standing — which may find an audience in folks who love him — as well as Man Up! (both premiere this month), about a trio of immature buddies controlled by the women in their lives, On the strong female side, the new season has Emily VanCamp and Madeleine Stowe in Revenge and a Charlie's Angels reboot with Rachael Taylor, Minka Kelly and Annie Ilonzeh as the smartest, toughest and most beautiful trio of bad girls-turned-crimefighters. Too bad they lack the magic of their '70s predecessors.

This season's The Biggest Loser is all about age. The contestants are set up in teams: old vs. young vs. people in the middle. Says trainer Bob Harper: "People could use their ages as an excuse not to exercise. I think this season we'll inspire a whole other group of people, some who are older, and show that you can keep going in spite of certain limitations of injury or age."

HEAR IT AND WINCE

TV continues to lead the way when it comes to the coarsening of American discourse. Comedian of the hour Whitney Cummings has creator-producer credits on her own NBC Whitney comedy, and CBS's Two Broke Girls. They're both rife with needless vulgarity, which makes them hard to recommend. Cummings' shows are hardly alone when it comes to the tacky and the crude. All the new network comedies contain lines that would never have made it past Standards & Practices even 10 years ago.

Simon Cowell's X Factor on Fox has begun more slowly than expected, but with Paula Abdul back at Simon's side, it looks like a shoo-in for success, and it had better be. It takes up two and a half hours of weekly prime time. Another Fox gamble is the modern family-in-prehistoric-times Terra Nova, which has a great cast and special effects. And you gotta like dinosaurs.

We'll leave it to cultural anthropologists to theorize about why, but this season offers viewers a choice of dark dramas based on fairytales: There's NBC's weird (and probably destined for failure) crime procedural, Grimm, (coming Oct. 21) in which all those frightful stories cooked up by Jacob and Wilhelm Grimm back in the early 1800s are true, as in the Big Bad Wolf is really a child-eating sociopath. And there's ABC's Once Upon a Time (coming Oct. 23) in which the fairy-tale world of Snow White and Jiminy Cricket is actually a parallel universe. But if you really want dark and scary you want FX's high-profile newcomer, American Horror Story. Destined to be the watercooler show of the new season, it is most certainly not for everyone, despite a cast including Dylan McDermott, Connie Britton and scene-stealing Jessica Lange. Things that go bump in the night on the shocking gorefest include a character having kinky sex with a ghost.

NBC's new chief, Robert Greenblatt, has a welcome preference for scripted shows. If one of his new dramas — the smart Maria Bello Americanized, modernized version of Britain's Prime Suspect — is a harbinger of things to come, NBC may be on the brink of better times. Another British import, the Hank Azaria-Kathryn Hahn Free Agents, about a pair of lonely coworkers who have sex and live to regret it, could go either way. There's strength in the rest of the NBC comedy lineup, old and new, including Kathy Bates' sassy Harry's Law and The Office with new star James Spader. Still, NBC's biggest ratings-grabbers are unscripted: football, and The Voice competition show, which returns midseason.