Network television may no longer earn the critical acclaim awarded its cable competition, but it draws the biggest audience, much of it over 50 years old. NCIS, for example, is going into its 11th season as the top scripted show on TV (about 20 million viewers an episode), while critical darlings such as Breaking Bad or Mad Men draw about a third of that on a good night.

"You have all these baby boomers who have tons of spending power," says NBC Entertainment President Jennifer Salke, so programmers are trying to figure out how "to appeal to the [older viewers] who actually own TVs and are watching them — and then hope that everybody comes along." That's good news for grownups, obvious in the slate of new network shows for fall. Here are the ones we recommend: 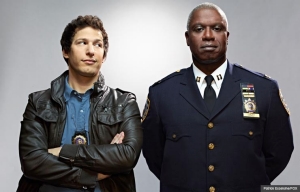 Watch this comedy for Andre Braugher's surprisingly strong comic chops. Always a dramatic actor (Homicide: Life on the Street, Men of a Certain Age), he shows a gift for deadpan delivery and it's a treat to watch. Braugher, 51, plays the stern new boss of former Saturday Night Live star Andy Samberg, a hotshot Brooklyn detective who chafes under the boss's watchful eye. 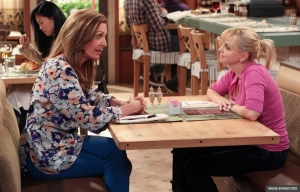 It's Allison Janney, 53, who is the draw for the 50-plus viewers in this predictable but likable sitcom. Janney, best remembered on TV for her C.J. Cregg character on The West Wing, is the loopy mom and, like her daughter played by Anna Faris, is a recovering alcoholic. Another reason to like it: Faris' character is reminiscent of some of the iconic female characters in '70s sitcoms — Laverne, Shirley and Rhoda, to name a few.

Watch the introduction to the new series 'Mom' 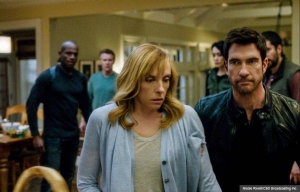 Dylan McDermott, 51, has proved in series such as The Practice, Dark Blue and American Horror Story that he has what it takes to command the small screen. In this new drama, he's a Secret Service agent who invades the home of a surgeon, played by the Emmy and Golden Globe winner Toni Collette, 41, who is scheduled to operate on the president of the United States. His demand: Botch the surgery, kill the commander in chief, or her family is dead. It's a tough premise to extend over 13 episodes, but this top-notch cast makes it worth a watch. 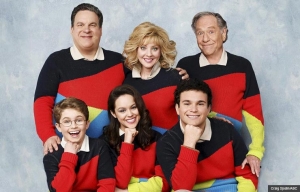 The unfortunate misstep in this sitcom is the stereotypically bumbling Grandpa played by the great George Segal, 79. He's a fine actor and comic and he deserves better. That aside, The Goldbergs is like The Wonder Years, just set in the '80s instead of the '60s. Patton Oswalt narrates as Adam Goldberg, looking back on his adolescence during the big-hair, boombox Reagan-Bush years; Sean Giambrone plays his camcorder-toting younger self. There are lots of laughs, led by the frustrated pleas of Jeff Garlin, 51, who infuses a role that could have been rote, that of put-upon dad Murray, with heart and humor. 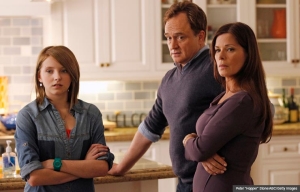 Don't be put off by the title. This is a fractured family tale about a thrice-married guy named Brad (played by another West Wing alum, Bradley Whitford, 53) who lives in the same town as his two exes (one of them the Oscar-winner Marcia Gay Harden, 54) and is settling down with his young, cute and third betrothed (Malin Akerman). How does a sitcom about a man who treats marriages like car leases — serially trading in wives for newer models — work so well? Cute kids, chemistry (Whitford and Harden sizzle) and, in the charming Akerman, an instant sitcom star. 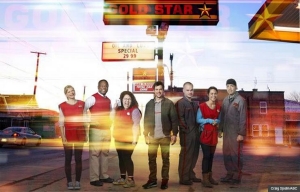 Coworkers at a Queens, N.Y., gas station and convenience store go in on a lottery ticket that makes them all rich — and completely messes up each of their lives. The drama, which follows many story lines at once, is a complicated, risky and mature idea. It works because the cast is solid, the premise intriguing and it's refreshing to see something original. Well, maybe not that original. It's based on a British drama, but at least it's not another crime procedural. 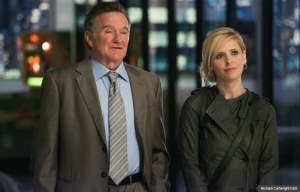 Having Robin Williams, 63, back on TV in his first regular role in more than 30 years is a gift from the TV gods. He plays Zach Cropper, a Madison Avenue copywriter who runs his own shop with daughter Sydney (Sarah Michelle Gellar, another TV darling whose return is getting much ballyhoo). The ad agency setting, with its pitches and creative sessions, gives Williams room for the manic fast-talkin’ flights of improv that made him famous. He’s funny, and so is the show. The challenge for the show runners will be to rein him in without resorting to a straitjacket. 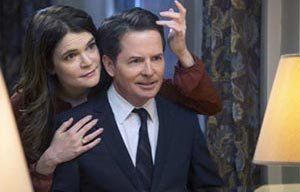 Playing a New York TV newsman juggling work and family, Fox, 52, needs only a few minutes to showcase his charm. The series incorporates the actor's real-life struggles with Parkinson's disease, and it's a bit too much in the first episode. Countless jokes about the illness from his wife, kids and coworkers are trying too hard to make it clear that it's OK to laugh. As long as the jokes move past the illness without abandoning it, the pieces are there for a huge hit. 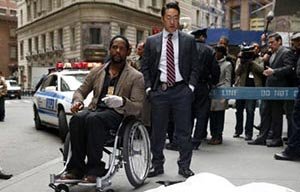 This is not your father's Ironside. It's way better. The reboot of this 1960s drama about a wheelchair-using detective once played by the imitable Raymond Burr has built-in appeal for boomers who remember Burr chasing bad guys on the streets of San Francisco. But there's more than nostalgia to recommend it. Chiefly, there's Blair Underwood, 49, who spins the title character in an angry, conflicted and compelling direction. 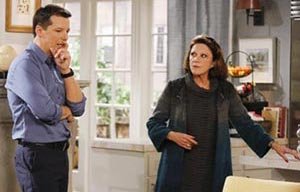 Linda Lavin, 75, steals scenes as Sean Hayes' meddling mother. "I'm playing a mother who is not the butt of a joke," she told television critics this summer. She sees the character as someone "who has something to say and is attractive and smart and challenging." Lavin may just be the saving grace for this show that is meant to be a vehicle for Hayes (Will & Grace), 43. He plays a single gay dad raising his teenage daughter; unfortunately, the execution is fairly flimsy. 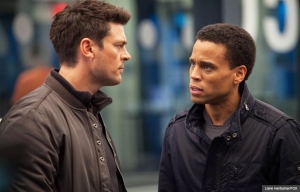 Karl Urban (as a detective) and Michael Ealy (as his human-looking cyborg partner).

If you like sci-fi, this is the show for you. Its co-creator is J.J. Abrams, 47, who put Lost and Fringe on the air. But this story may have more warmth because of the pairing between a human detective and a sentient cyborg. Set in 2038, Almost Human stars Australian actor Karl Urban, 41, as Kennex, the human partner in the pair, and Michael Ealy, 40, as the cyborg called Dorian. Urban earned sci-fi cred playing Bones in the recent Star Trek films, but this show will rise or fall on the Kennex-Dorian relationship, which starts out strong. 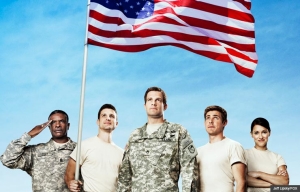 If Beetle Bailey came to TV he might be in this sitcom about three brothers stationed together on a tiny Army post in Florida, where important assignments include tracking down a military family's lost dog. "This is the opposite of an Army commercial," one brother says, and he's hilariously right. Watch for Keith David, 57, as a base commander who constantly, inappropriately reminds people of the foot he lost in combat, usually by removing and displaying his prosthesis.

There are notable debuts taking place in the non-network world, too.
Here are four we like for airing (or streaming) this autumn. 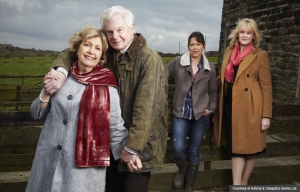 The romantic drama about two septuagenarians and former childhood sweethearts who reconnect via Facebook and rekindle their love after being separated for six decades was an enormous hit in the UK last year, garnering big ratings and the BAFTA award for Best Drama Series. Derek Jacobi, 74, and Anne Reid, 78, play the couple at the center of the six-episode series that's all about reuniting and feeling good. 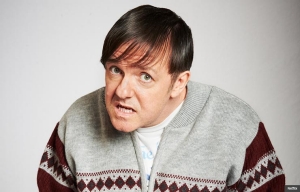 Yes, that is Ricky Gervais.

Ricky Gervais' comedy has always tiptoed on the razor's edge of propriety, from the cringefest of The Office to Life's Too Short, which poked gentle fun at little people. He's at it again in this bittersweet show. Gervais plays the mentally dim middle-aged title character, who works with seniors at a retirement home."It's my favorite thing I've ever created or worked on. I love Derek," Gervais, 52, said when the show premiered in England last spring. "I wish I were more like him."

If you remember the groundbreaking books of the pioneering sex researchers Masters & Johnson, you won't want to miss this titillating new drama based on Thomas Maier's biography of the couple. Michael Sheen (Frost/Nixon) plays Dr. William Masters, and Lizzy Caplan (New Girl) is Virginia Johnson, the research assistant he eventually married. Beau Bridges recurs as a university president appalled at the duo's research and the elevation of the study and discussion of sex from smut to science. 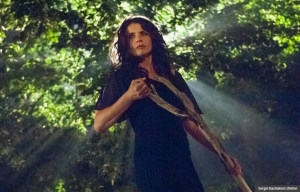 Julia Ormond, seen in movies such as Legends of the Fall and Sabrina, seems a natural TV star; in addition to her new role as a Long Island, N.Y., witch, she's been delightfully droll in a recurring Mad Men spot. A supernatural soap about Ormond and her two daughters (Jenna Dewan-Tatum and Rachel Boston) has promise because of the twist: Mom's never told her girls about that whole witch thing. Things gets complicated, especially when people in their Hamptons hamlet keep turning up dead.