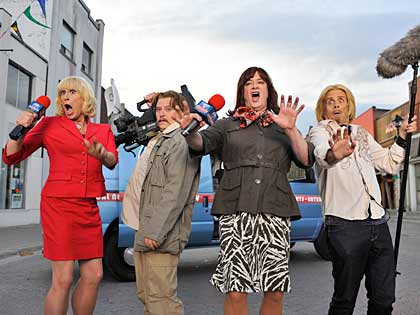 When the The Kids in the Hall premiered on HBO in 1989, they were widely regarded as the freshest, funniest and silliest sketch comedy troupe since Monty Python. Since their successful five-season run, they’ve toured sporadically, and they released one film, 1996’s Brain Candy.

• Movies for Grownups: The King of Comedy

• Spreading the Word About Cancer

Community: Are you a Kids in the Hall fan? Plan to watch their new series Death Comes to Town? Join the TV Talk group to discuss this and your other favorite TV programs. Discuss

Now the team is back on TV with The Kids in the Hall: Death Comes to Town, an eight-part murder mystery that premieres on IFC on Friday, Aug. 20, featuring their usual gender-bending, multicharacter burst of comic creativity.

For the troupe’s Scott Thompson, 51, the return is especially significant. Two weeks into writing the series, Thompson was diagnosed with non-Hodgkin’s lymphoma, and he spent the next year enduring the hell of chemotherapy and radiation.

Today cancer-free, Thompson spoke to AARP about the troupe’s unique brand of comedy and how he’s living life after cancer.

A: In some ways, the comedy is better and deeper, because we’ve had so much more life experience. There’s been a lot of pain over the years, and I think pain can often be turned, through a form of alchemy, into comedy. At the same time, when you’re young, you really have no idea what areas you’re blundering into, and you just blunder into them. Now we kind of know what areas we shouldn’t blunder into — although we blunder into them anyway.

Q: Death Comes to Town takes on explosive topics like abortion, artificial prolonging of life and necrophilia. Is how you approach these different than how you might have done it back then?

A: When I was younger, I really wanted to explode things and bring them down and destroy everything. Now I’m not so into that. I love the idea of exploding a genre, or taking a topic and ripping it apart, but I understand now that it’s a very young man’s game to want to destroy everything.

Q: This show is on IFC, which has a young viewership, but long-term Kids fans started watching you over 20 years ago. Do you see this material as being geared more toward one fan base than the other?

A: No. We’ve been rediscovered over the last two years on YouTube, and those are overwhelmingly young people. Our last tour was filled with kids that we had no idea how they even knew who we were. I think some of the comedy we’re doing will appeal more to the middle-age person who’s been through more, but there’s still, I think, a rock ‘n’ roll energy to us that appeals to young people, because we’re still very engaged in the world. We’re still remarkably immature men.

Q: You just endured a harrowing battle with cancer. Congratulations on being cancer-free.

A: And it only cost me $300,000 to live — although that’s not true, [Canadian] health care paid for it — but that’s what it would have cost me if I’d had to go through treatment without health care. I’m very, very grateful for Canada. I had to pay for one drug, but other than that, the Canadian government paid $293,000 for my life.

Q: Now that you’re past this ordeal, how has it changed the way you look at life?

A: I’m not saying I don't sweat the small stuff at all, but much less than before. I’m so much happier than I was a year-and-a-half ago. Whenever things get really bad, I just remember that even though it’s going bad, at least it’s going. That’s a huge difference in life. Before, I would get caught up in things like: Why am I not a big movie star? Why do Will Ferrell and Paul Rudd and Steve Carell get all these parts? And why don’t people see past me being gay and see my talent? Now I’m like, whatever. Big deal that I’m not a big movie star. I have no complaints. To me, it’s like a video game. I’m in the bonus round now, so it’s very, very sweet.

Q: What changes have you made in the way you live your life because of it?

A: I don’t really drink much anymore, I eat extremely well, I get my sleep and I don’t rage like I used to. I used to be a rageaholic, and I actually believe that my rage, in many ways, was one of the things that contributed to me getting cancer. I had non-Hodgkin’s lymphoma and it was in my stomach, and I think about the stomach, spiritually, as the place where all your rage and anger and bitterness sit. I truly believe that’s one of the factors that gave me cancer. So in order for me to not get cancer again, I have to let go of all that. So that’s what I’ve done.

Q: But as you mature, don’t you think that if you hadn’t gone through this experience, you might have been coming to that place now anyway?

Q: Were you an atheist before this?

A: I was an agnostic. I’ve never been an atheist. I’ve never been certain about anything, really ... well, no, that’s not true. When I was younger, I was very certain about things. But with age, you start to realize that everybody has a right to their opinion, and the truth is far more gray than it is black and white.