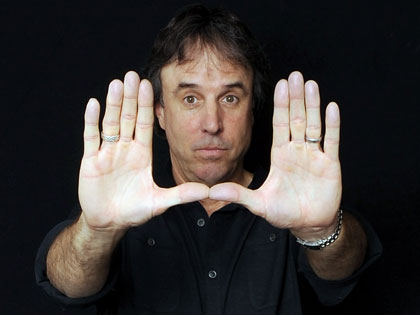 Kevin Nealon spent nine seasons on Saturday Night Live, one of the longest tenures in the show’s 35-year history. But on Showtime’s comedy series Weeds, Nealon plays a man who probably couldn’t hold a job for a week, let along nine years.

• The Kids in the Hall Return to TV. Read

• Movies for Grownups: The King of Comedy. Read

Community: What's your favorite TV comedy? Join the TV Talk group to discuss this and your other favorite TV programs. Discuss

Accountant Doug Wilson relishes the hell-raising lifestyle of the drug-dealing Botwin family, led by Mary Louise Parker. Now, as the Botwins run from the law and other drug kingpins, Wilson — which might just be the funniest role of Nealon’s career — joins them on the road in season six.

While Nealon, 56, plays a nihilistic stoner on Weeds, his real life is much the opposite. As documented in his 2008 comedic memoir — Yes, You’re Pregnant, But What About Me? — Nealon became a first-time father at the age of 53. The actor spoke to AARP about playing Doug Wilson, all-too-generous fans and the peculiarities of being an older first-time dad.

Q: What makes Doug Wilson on Weeds so much fun to play?

Q: Playing a chronic pot smoker, do you get bizarre “gifts” from fans?

A: Absolutely. People think that because I’m on that show that I smoke pot, and I don’t. They’ll come up to me after a show and say, “Dude, wanna toke up?” I’ll say I don’t really smoke, and they’ll say, “Dude, I know you smoke. I’ve seen the show.” I’ve been given handfuls of pot on the street in San Francisco. People come up to me and give me pot in the Haight-Ashbury district, but I guess they do that to everybody there.

Q: You became a first-time father at 53. Before that, how did being around friends your age who had kids in college, or even grown, affect you?

A: Part of me felt left out, because I always wanted children, and part of me felt more childlike because I didn’t have the responsibility that they did. I was more self-centered. I could see a movie or take a trip if I wanted to, or watch whatever I wanted on TV.

Q: So did hanging out with friends who had children reinforce your desire to have kids, or make you wary of it in some way?

A: When I would see my friends with their kids, I was envious that you can use children to get out of just about anything. If you don’t feel like going to a dinner party, you could say, “My kid’s sick. I can’t make it.” Who’s gonna argue with you? But I always was envious of my friends [who] had children, even though I knew from watching that it was a lot of work.

Q: Your wife, Susan Yeagley, is 17 years younger than you. Did she steer you toward a younger lifestyle, or did you pull her the other way?

A: I think we met halfway. Even though she’s 17 years younger, she doesn’t like to go out to clubs and go dancing, so I didn’t have to do that. That said, I think having a younger wife and a young child keeps me young and active.

Q: What are the greatest challenges of first-time fatherhood at an older age?

A: There’s certainly a lot of energy required for your child. I didn’t realize how much. You have to be willing to withstand screaming and crying, since as you get older, your patience is sometimes thinner.

Q: Have you thought about how you and your son, Gable, will relate to each other when he’s in his teens and you’re approaching 70?

A: It’s not as if we’ll be reunited then. We’re evolving together. My goal is just to keep him even-keeled and teach him values and moral discipline, and make sure he knows the difference between right and wrong — as far away from Doug Wilson as possible. I think when I finish celebrating my 70th birthday, we’ll be very content with each other. I also plan on being in excellent shape when I’m 70. I’ve always tried to keep a connection with youth, whether in my act or the shows that I take on. Some of my friends are pretty young, and I try to listen to music that’s youthful — a generation below me.

Q: Soon after your son was born, you said, “I was surprised at how much I could actually love something.” Do you think that ability to love relates to maturity?

A: I see the love in my child’s eyes when he sees me, and I know it’s gigantic. As an older person, I’ve been in love before, and I’ve loved, but this is really an immense, out-of-control-proportion amount of love that you can’t even describe.