A few years back, Susan Sarandon had the phrase “ANDAND” tattooed just above her right wrist. It’s an acronym for "A New Dawn, A New Day."

"When you've been hurt or when you've hurt someone, you have another chance to redo it, you know?" she says thoughtfully when asked about her ink. "When something goes wrong, or you make mistakes, or someone else makes mistakes — with each new dawn you have a whole day to reinvent yourself."

For the Oscar winner, the last few years have been full of new dawns and days — and most of them have had nothing to do with her career. Her long relationship with actor Tim Robbins ended after 23 years. Her youngest children, sons Jack and Miles, moved past their high school years. Today, at age 65, Sarandon is as passionate and as wide-awake to the possibilities of life as ever. 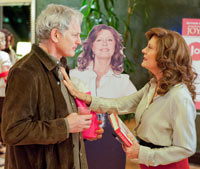 Victor Garber as Willy and Susan Sarandon as Joy in "The Big C." And no, you're not seeing double.

She’s also suddenly as busy as ever, with a string of upcoming big and small screen roles, including Robert Redford’s The Company You Keep, a saga of a former Weather Underground militant, and the financial crisis drama Arbitrage with Richard Gere and Tim Roth.  This week, on the Showtime series The Big C, she begins a role as a guest start in multiple episodes. She’ll play a self-help guru and cancer survivor whose seductive charisma works its magic on both Cathy and Paul Jamison (Laura Linney and Oliver Platt).

Teaming up with an old friend

"I was really thrilled to work with Laura.  They don't get too many of us gals working together," observes Sarandon, who has been friends with Linney for years, but had never acted with her before.  "And usually, if you do, your characters hate each other; that's the way they make drama happen." There may be a reason for the show’s well-realized female characters — Sarandon points out that The Big C is highly populated with women writers and directors.

Working on a TV series calls for long hours — she logged a number of 16- and 17-hour days on The Big C —  but it didn’t faze her.  But ask her about the secret to her vitality, and she laughs.

"I don't think of myself as someone who has a lot of energy, because definitely I'm dragging my ass around sometimes," she says. "I think if you're lucky enough to be doing something that you really like — and the other things that I do outside of acting are also things that I feel very passionately about — then what happens is, you get surrounded by people that are equally passionate.  And then, it's like some kind of perpetual motion machine that happens when people are excited to be where they are and doing what they're doing."

Next: Sarandon engages the world off the set. » 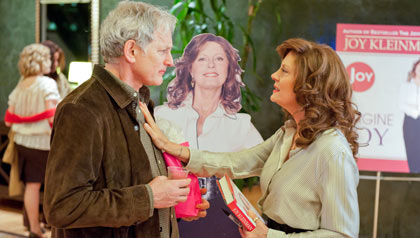 Victor Garber and Susan Sarandon in "The Big C."

Keeping busy, from politics to ping-pong

Sarandon’s activities are diverse.  She has traveled to Cambodia with her daughter, 27-year-old actress Eva Amurri, to help a friend who is working to rescue young girls from human traffickers.  Her political activism is as strong as ever.  Sons Jack Henry, 22, and Miles, a 19-year-old student at Brown, still have space at the family home.  Their changes are ongoing, too. "Now I have to deal with the next kind of transitions that I haven't dealt with before, so that keeps things fresh," she says.

And then there is her venture into the business world as a ping-pong club entrepreneur with 34-year-old partner Jonathan Bricklin, who is widely believed to be her romantic interest, something she's never come out and confirmed.  She refers to their relationship as "collaborators" and leaves it at that.

The first SPiN table tennis club opened in New York, and there are now locations in Milwaukee and Toronto.  A downtown L.A. club is coming, Miami and Chicago clubs are in the works, and "we have interest in Austin, Portland and San Francisco," Sarandon says. She reportedly donated $98,500 to fund table tennis programs in New York City schools, and is a big believer in the game’s stress-relieving and attention-focusing benefits for kids.

"I really love that the clubs have become an instrument that revitalizes the idea of ping-pong," she says. "Back in the old days, table tennis was really a big thing in the United States, and there are so many things to recommend it. It's one of those games you can play until you're old-old-old."

You may also like: Diane Keaton tells her story in new memoir.