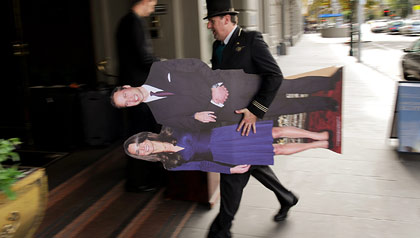 A doorman at the Hotel Windsor in Melbourne, Australia, carries a life-size cutout of Prince William and Kate Middleton.

Eleven score and 15 years ago, the Founders declared independence from Britain, ruled by mad King George III. In the seven years of war that followed, some 25,000 men serving in the new nation's armies lost their lives in the fight against the forces of the King — who, as Thomas Jefferson pointed out in the Declaration of Independence, "has plundered our seas, ravaged our coasts, burnt our towns, and destroyed the lives of our people" in his bid to establish "an absolute tyranny over these states."

The result of the hard-fought American victory over the King? Our messy, imperfect, still evolving democracy, based on the principle that all people are created equal — a principle that most of us now take for granted, but one that was utterly, well, revolutionary at the time. It's a principle expressed perfectly by that great American philosopher, Aunt Eller of the musical Oklahoma! She declares "I don't say I'm better than anybody else, but I'll be danged if I ain't just as good." And it's a principle, of course, that is completely antithetical to the institution of monarchy.

Now, millions of Americans are preparing to wake up early Friday morning to turn on the television and watch King George III's direct descendant, Prince William, marry a "commoner" (an eight-letter word that speaks volumes about what the royals think of you and me) in a lavish celebration not only of their wedding, but of the very concept of monarchy — the same British monarchy (with, thankfully, much less power now) that the brave American colonialists gave their lives to repel.

Look, I like weddings as much as the next guy — maybe, considering that I'm a guy, more than the next guy. In a few weeks I'm flying clear across country for the wedding of my second cousin once removed (I'm not making this up). I'll cry when I see her enter the church, I'll dance joyously with my cousins at the reception, and I'll collapse in a happy heap, exhausted and with tie askew, when the whole affair is over.

But no matter how much champagne I drink, I won't be nearly as besotted as wide swaths of my fellow Americans — and certainly almost all of the American mass media — seem to be with the marriage of a young prince whose sole qualification for his immense wealth and fame is that he was born.

Let the Brits be excited if they want; it's their monarchy, and if they want to spend some $60 million a year maintaining the lifestyle of a family we had the good sense to overthrow 235 years ago, it's their right. They're British, after all; they're supposed to be a bit loopy. (And please spare me the old canard about the royal family being worth the money the British state lavishes on them because they allegedly attract millions of tourists to England; France gets more than twice as many international visitors each year as England, and last I checked no one has lived in Versailles for a couple hundred years.)

But why us? Why this obsession with a family who fundamentally believe they deserve the attention and money thrown their way, because — as they also fundamentally believe, make no mistake about it — they're better than you are, simply because of who their parents are and who your parents aren't? Why do we bother joining in their celebration of this profoundly anti-democratic hooey? What could be farther from American values of hard work and advancement on merit — of all of us being created equal? What have William and his princess done to deserve this adulation, especially from us? (A friend of mine, when I posed this question, pointed out that the royal family's descendants actually worked hard to get Elizabeth and her crew to where they are today: They beheaded their wives, married their cousins, pillaged their countrymen and tortured their opponents.) Why are we letting this overwrought spectacle of royal narcissism plunder our brains, ravage our media, burn our self-esteem and destroy the sleep of our people?

I wish I knew. Here, instead, is what I do know: When I wake up at 6 a.m. Eastern time on Friday morning, I'm not going to turn on the television. Instead, I'm going to light a candle in the memory of every American who's given his or her life in the fight against tyranny, monarchy, injustice and those who believe they were born better than you or me. I'm going to listen to the soundtrack from Oklahoma! so I can hear Aunt Eller shout out the American creed. And I'm going to re-read the Declaration of Independence, with its stirring conclusion in which the Founders "mutually pledge to each other our lives, our fortunes, and our sacred honor."

In their sacred honor, I invite you to do the same.

Bernard Ohanian is editor of AARP.org.