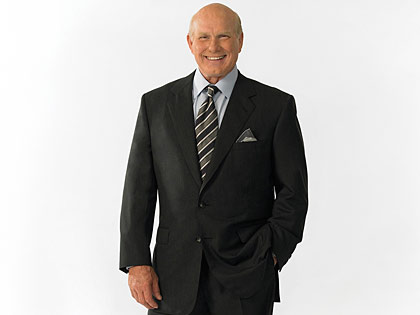 "I love my job," says Terry Bradshaw, co-host of the top-rated TV pregame show, Fox NFL Sunday. " ... It's a great gig, man, talking about something you love, having fun and entertaining the masses."

Most football fans know Terry Bradshaw as the Pittsburgh Steelers quarterback who won four Super Bowls over a six-year span in the '70s. A "good old country boy" from Shreveport, La., Bradshaw had a cannon for an arm, and he played every game like it might be his last. He's a former league MVP and a first-ballot Hall of Famer.

We know you love the NFL. So join our NFL community and talk football with other readers. Do

But he's been just as successful in his backup career as an NFL studio personality. For the past 17 seasons, Bradshaw has been the co-host of TV's top-rated pregame show, Fox NFL Sunday. On the show, which earned him three Emmy Awards, he plays the comic foil to on-air partners Howie Long, Michael Strahan, Jimmy Johnson and Curt Menefee. Bradshaw, 62, also offers expert game analysis, narrates highlights and presents an annual comedic awards segment.

He spoke with us about old injuries, his new favorite sport and why he may have missed his calling.

Q: Your career was filled with postseason heroics, including a last-second TD pass to Franco Harris in 1972. The "Immaculate Reception," as it became known, is still considered the single greatest play in NFL history. What's your personal favorite?

A:  Well, it certainly isn't that one because I didn't see it. I was knocked down. It may be "60-Prevent-Slot-Hook-And-Go," where John Stallworth made the most amazing catch to sew up Super Bowl XIV. That may be the most pressure-packed pass I ever threw. John had already made a touchdown on that play the previous series, and the thinking was if it worked once why wouldn't it work again? The ball was almost batted down. It barely cleared the safety's hands after going 70-something yards. … John leaned back and made an incredible catch. That would be the play [laughs]. At least I saw it.

Q: After retiring from pro football in 1983, you became a game analyst whose high-spirited boisterousness set the tone for today's NFL pregame show template. Have you always wanted to be an entertainer?

A: I remember years ago people criticized me for adding a certain amount of humor to the pregame show. Now it seems everybody is trying to be funny or have some antics. I was serious as a player — I couldn't be in the huddle and go, "Hey, I gotta tell you guys. Have you heard the one about…?" — so I think people were surprised by my humor [when I became a co-host]. But I've been like this all my life. I always wanted to be a comedian and do standup. I was always entertaining the family.

A: I imitated people. That was huge. I did aunts and uncles, talking like 'em, walking like 'em. So I kind of missed my calling. It would've been more fun to be in entertainment than to play football.

Q: Your younger co-hosts on Fox NFL Sunday love to rib you about your age. Does it ever get, well, old?

A: Well, I can't run anymore. That's the one thing I loved doing. And I can't play golf hardly at all because of wrist and back pain. [He lets out a painful moan.] My back's been out for three days. I've been taking painkillers and muscle relaxers. All my football injuries now have arthritis in them. I don't have hair anymore. I've shrunk. I'm barely 6 feet 2 inches. I just had my teeth fixed because I'm a grinder. What else do you want to know? [He laughs.]

Q: With so many physical problems, which games can you still enjoy playing?

A: I'm a big card guy. I play Rook, Liverpool Rummy — love that. I play Pac-Man; shoot pool. Our latest thing, which drives everybody at Fox crazy, is [table shuffleboard]. It's a lot of fun.

Q: Any plans to retire soon?

A: No, I love my job. I love the people I work with. It's a great gig, man, talking about something you love, having fun and entertaining the masses.